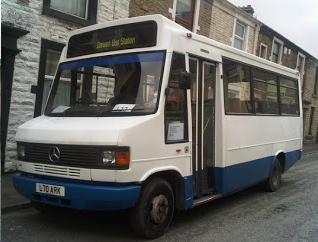 
The first Reading station was opened on 30 March 1840 as the temporary western terminus of the original line of the Great Western Railway which reached its intended terminus at Bristol in 1841. As built, Reading station was a typical Brunel-designed one-platform station, with inconvenient routeing needed to reach the platform face.

New routes soon joined the London to Bristol line, with the line from Reading to Newbury and Hungerford opening in 1847, and the line to Basingstoke in 1848. In 1860, a new station building ...

... in Bath Stone and incorporating a tower and clock was constructed. In 1898 the single sided station was replaced by a conventional design with 'up', 'down' and 'relief' platforms linked by a pedestrian subway.

The station was originally named Reading and became Reading General on 26 September 1949 in order to distinguish it from the separate ex-London and South Western station nearby whose line reached the town in 1849. It only took 100 years to recognise that there might be confusion! 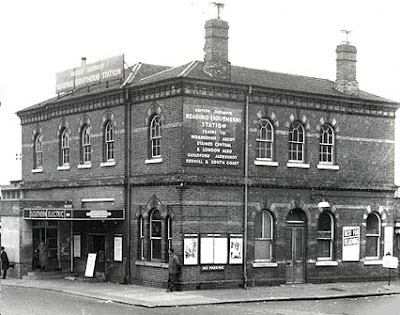 From 6 September 1965, services from the former Reading Southern station were diverted into a newly constructed terminal platforms in the former GWR station. 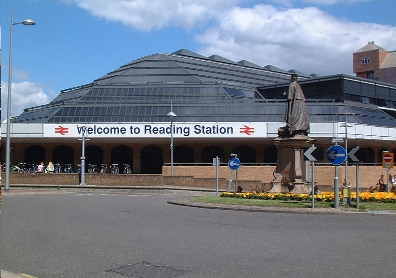 In 1989 a brand new station concourse, included a shopping arcade named after Brunel, opened on the western end of the old Reading Southern station site, linked to the platforms of the main station by a new footbridge. At the same time a new multi-level station car park was built on the site of the former goods yard and signal works to the north of the station, and linked to the same footbridge.

The station facilities in the 1860 station building were converted into The Three Guineas public house. 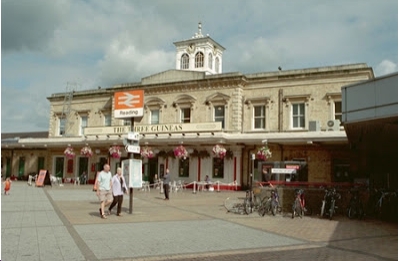 [Here endeth Wikiedia's contribution.] Even in 1945, the station was crowded at busy times ... 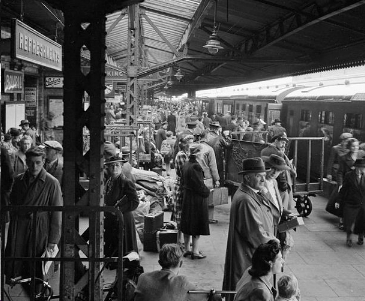 ... but in recent years, busy times have become all day, every day. 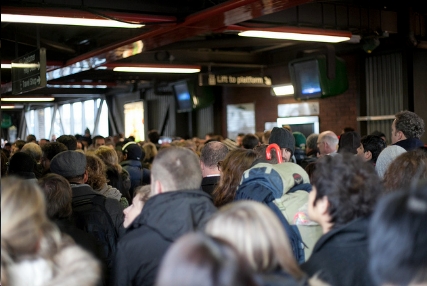 The 1989 concourse became insufferable at peak times or when services were disrupted. So something had to be done, and something which would allow for further future growth.

Answer: a complete rebuild of the platform area, adding 5 new platform faces and a massive new footbridge. After long, long months of disruption the new facilities opened at the end of an Easter Holiday 2013 shut-down.

Chaotic Reading station
is now 'welcoming'
Commuters breathed a sigh of relief as Reading station got back to business as usual after a second weekend of disruption ended on Monday. The station underwent a crucial two-week phase of its £895m upgrade, which includes the installation of five new platforms, two additional entrances and the eye-catching new link bridge. 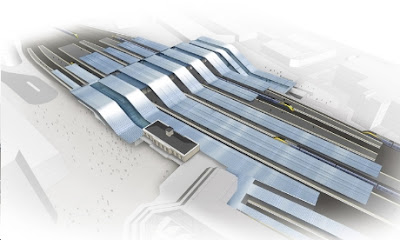 It is the result of this rebuild that fbb was able to reconnoitre on his return from the visit to Butlers Lane (Birmingham) a week or so ago. Tomorrow, then, we take that "recce"!


Next Rail Blog : Wednesday 5th June
Posted by fatbusbloke at 02:00