The End is Nigh! Ends are usually the only things that are "nigh"! 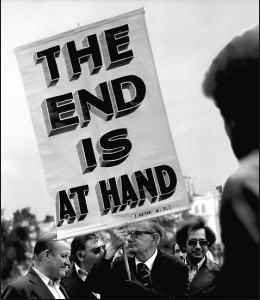 And the nighness of First Bus' end in Northampton has become nigher than nigh. A blog or three ago, fbb apologised for the delay in completing his review the most recent changes to Northampton's bus network and thus the latest twist in the tale of Mr Fearnley's omnibological death throes. See "First's Long, Lingering Northampton Death?" (read again) Since those alterations in early June (unreported by fbb, so far) things have moved on apace.

For the benefit of non-experts, let us step back a year or forty. In the mid 60s it was decided, by the faceless "them", that Northampton would be developed as a "new town", expanding from a population of about 120,000 to over 200,000. The initial phase of this growth would envelop the home of the now fat bus bloke.

fbb's dad was clerk to Billing Parish Council at the time and the plans were discussed at length and with much opprobrium. 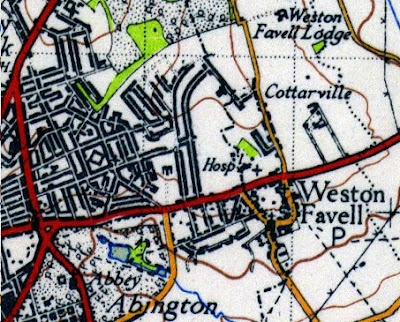 The Town's expansion along the A45 Wellingborough Road had begun in the 1930s with substantial Council and private development north of Abington Park. The new "Eastern District" would continue this process, swallowing the quiet villages of Weston Favell, Little and Great Billing then spreading out to Ecton. So in 1968 a Development Corporation was created and work began. 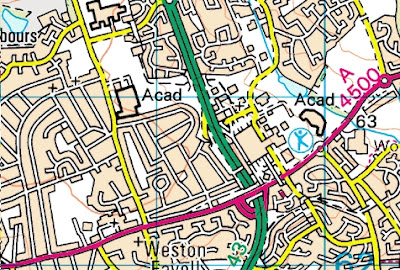 As well as houses, a huge "District Centre" appeared almost overnight, plus a big new road (green on the above map).

The new Weston Favell had two huge supermarkets (later merged into one mega Tesco!), a library, a Church and a parade of indoor shops, all linked to the footpath network by a series of overhead tunnels ... 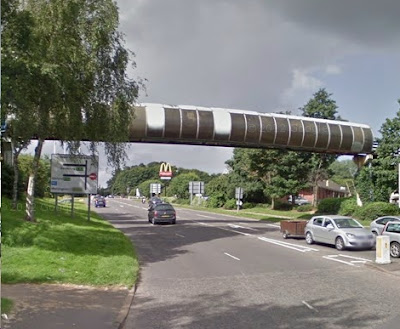 ... very surreal and profoundly disturbing to fbb's mum, who, being of a nervous disposition, vowed that "you would never get her to walk through one of those!" The fbb family "pile" ( F  on the maps) was close to this disturbing architectural excrescence and, home for the hols, fbb set about exploring and investigating.

Roll on to 2013 and the Eastern development is complete and mature; and it is here that we look for part of First's ultimate demise. 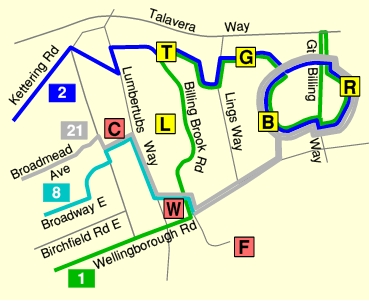 Over the years buses to Northampton's former eastern suburbs have been extended into the new districts and the fbb map above shows the state of play (in colours) at the end of May,  reading from top to bottom and concentrating on routes to Rectory Farm.

2  (Northampton Corporation's old route 11, Mansfield Hospital) extends via  T horplands,    G oldings, and in a clockwise loop via   R ectory Farm and   B lackthorn. This is First's last remaining excursion to the East, everything else has gone to Stagecoach.
every 10 minutes . 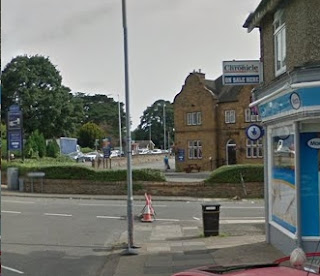 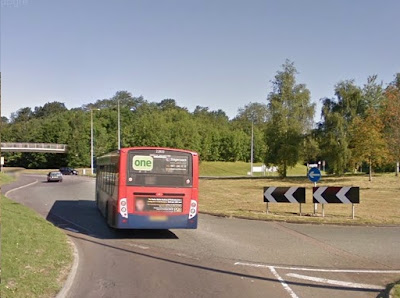 Then, in an applecart-upsetting mood, Universitybus (aka Uno, and contracted to Northampton University) gets all expansive and decides to stray far from University territory and extend a service into the Eastern District**, via a route that has no connection with the University at all. 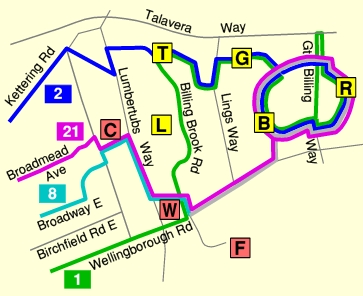 21  Uno's incursion, using Northampton Corporation's old route 4 Broadmead Avenue, runs via Northampton   C ollege and   W eston Favell Centre, along the Wellingborough Road and into the usual loop via   B lackthorn and   R ectory Farm. Already Broadmead Avenue and the College are served by Stagecoach 7, so Uncle Brian is less than ecstatic about the intruder.
every 15 minutes 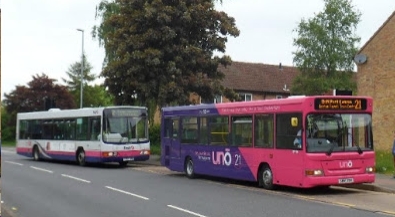 Thus, Stagecoach extends the existing  8  via Wellingborough Road and the loop via   B lackthorn and    R ectory Farm. 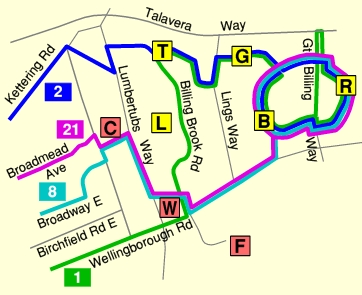 In a directly competitive sense all this leaves First's route 2 untouched. But consider the decisions made by Mrs Miggins of Allard Close, Rectory Farm. 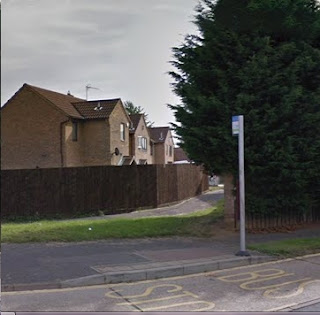 Instead of 12 buses an hour to Northampton's centre (Stagecoach   1  and First  2 ), she now has an extra 7 (Stagecoach  8  [3] and Uno  21  [4]). Playing the statistics game, and assuming she has no preference for operator and gets on the first bus along, First Bus is now less likely to be first.

So less passengers. And First's response to all this? From August 11th the timetable for route 2 is changing yet again; Sunday buses are being withdrawn completely.

But things are much more serious for First en route to the Obelisk. 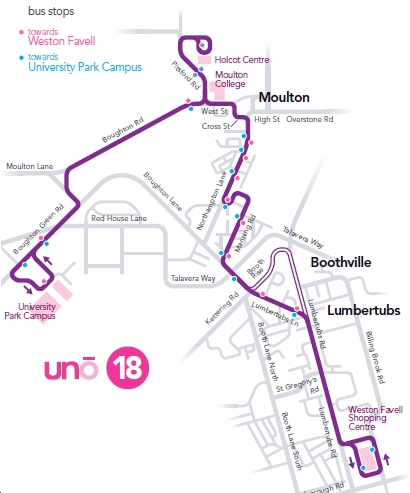