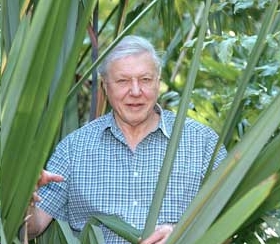 fbb has been sent a transcript of an extract from a new wild-life programme which explores some of the rarer creatures that can be observed in various locations of "This Sceptred Isle". Although Sir David is not renowned for his interest in Public Transport, at least one of these extracts refers to a bus! 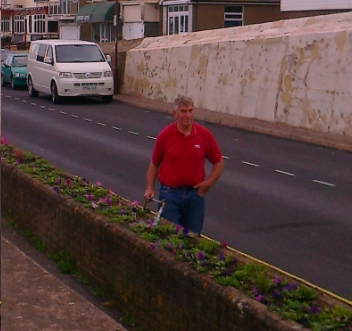 You can just see his elongated proboscis which has evolved to spray essential nutrients on the growing plants.

But, on the opposite side of the road, we spot "nature red in tooth and claw" as the weedkillus terribilus go about their destructive task. Always hunting in pairs, these related creatures also spray; but a foul-smelling and toxic fluid which, very quickly, brings death to all green things. The blue sac contains their reserve of poison. The top picture shows one of these beasts just after its attack on a flower tub! 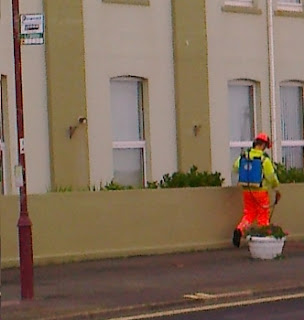 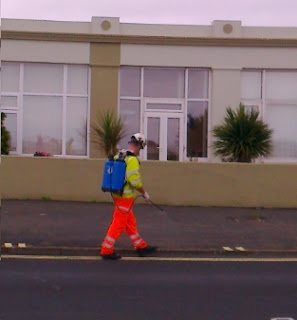 Note their bright plumage, a warning to any other creatures who might consider an attack; and a powerful protection against the flesh eating marigolds so prevalent in East Devon. You can also see their heavy skull protection, evolved, so expert Douglas Adams suggests, as a defence against falling bowls of petunias. 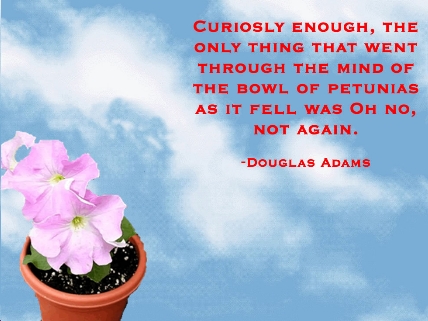 It is a thrill to observe creatures that have adapted so astoundingly to their relationship with we human beings. Here, for example, is the increasingly rare boggus hygienicus ... 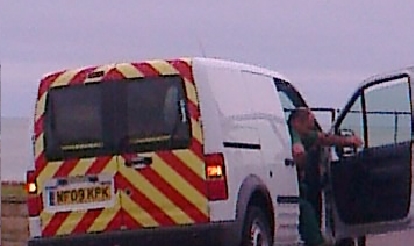 ... seen here crawling out of his protective shell and scuttling off to explore those essential but unmentionable places where we humans dispose of our personal waste products. Notice his shell's bright colours and phosphorescent dots saying to possible predators, "stay away, work in progress". Similar to the tick-birds that hitch a ride on elephants, the boggus survives on what we reject!

Another scavenger only occasionally filmed is womblus dewonius orientalus; shuffling round the esplanade and beach, collecting stuff. 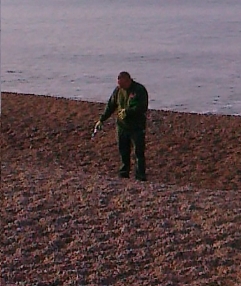 Underground, overground, down by the sea
The Wombles of Seaton East Dev'n are we
Making good use of the things that we find
Things that the everyday folks leave behind

Our womblus is seen here punctiliously emptying shingle from a beer bottle; so that the clever little chap can recycle the glass.

Our final glimpse of wildlife in the very early hours is of the rarest of all creatures. In the last four weeks our team has only spotted two of these shy little fellows. He is, of course ... 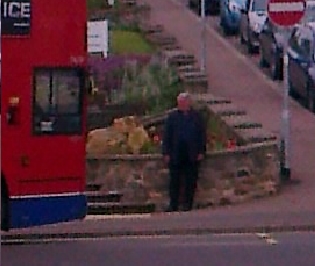 On a slightly more serious note, it is good to see the town of Seaton keeping itself clean and tidy for the summer visitors so essential to its economy. It is equally heartening to see that auntie Frances does, occasionally, bank a £3 fare on the first trip of the day. And talking of Axe Valley Travel, in addition to its four Merlins for schools duties, the company retains several of these ... 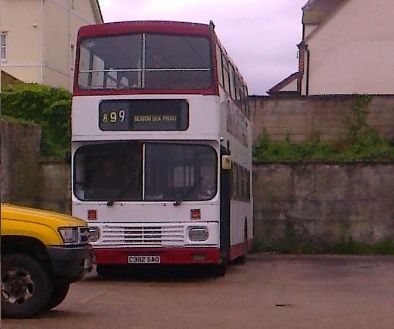 ... as spares. Formerly with Stephensons of Essex ... 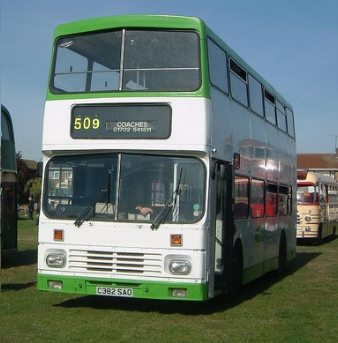 ... this is a vehicle that is used when one of the Merlins is undergoing tinkering behind the closed doors of the Harbour Road depot. First registered in Carlisle in 1985/6, the vehicle, a Leyland Olympian, was with Cumberland Motor Services, later Stagecoach. [or so fbb thinks?]

--------------------------------------------
Whilst the "Sir David" creatres were all snapped on one single day last week, fbb is pleased to report that floribundus consideratus and boggus hygienicus were out and about again, today, Sunday. fbb had a chat with the flower bed planting/weeding/watering man. He is contracted to Seaton Town Council and tends all the town's flower beds and tubs, working an early shift seven days a week. Give that man (and that Council) several good house points! Boggus is employed by East Devon Council