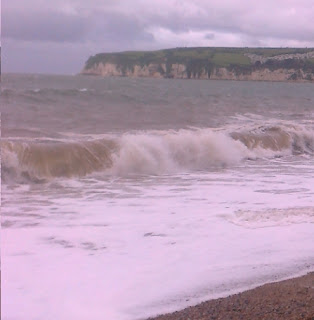 Ahh, the breakers, the spume, the white horses, the surf crashing on the shingle, the sea spray in your face: fbb can't wait to get his cozzie on and swim across the bay before breakfast! [Apologies for this flight of fancy or just plain insanity. fbb will perhaps have a paddle when, and if, the sea temperature rises a little higher than its current level of just above absolute zero. He has now taken his medication - Prof Ed Schrinker, fbb's therapist]
------------------------------------------------------
There isn't a lot of sea in Birmingham! 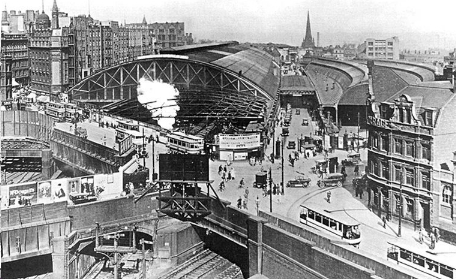 New Street station was built as a joint station by the London and North Western Railway (LNWR) and the Midland Railway between 1846 and 1854 to replace several earlier rail termini, most notably Curzon Street.

For the first 31 years, the station was jointly used by LNWR and Midland Railway trains. However in 1885 the Midland Railway opened its own trainshed alongside the original one for the exclusive use of its services, effectively creating two stations side-by-side. The two companies' stations were separated by a central roadway; Queens Drive.

Traffic grew steadily, and by 1900 New Street had become extremely busy, with an average of 40 trains an hour departing and arriving, rising to 53 trains in the peak hours. The main entrance was on Stephenson Steet and included the prestigious Queens Hotel. 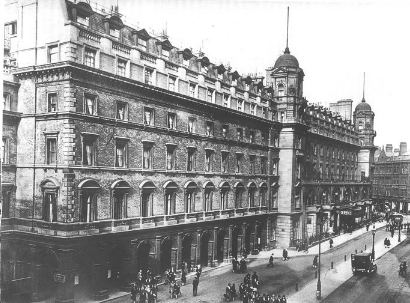 The station was gloomy, busy, noisy, smelly from the engines' smoke and often crowded, as here in 1912!. 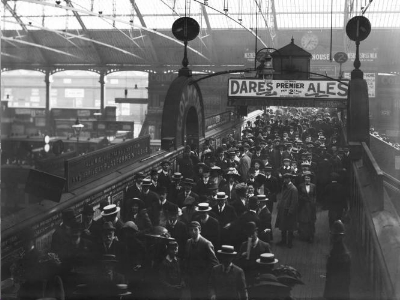 The 1960s rebuild cleared away the two-station confusion ... 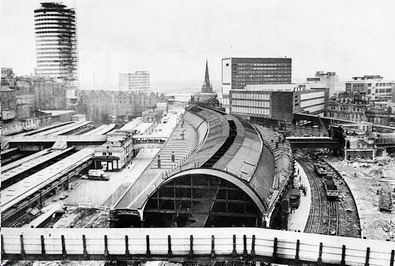 ... and replaced it with a modern, more efficient (?) facility with shops and offices on a raft above the platforms. But, the new station soon became gloomy, busy, noisy, smelly from the (diesel) engines' smoke and often crowded. 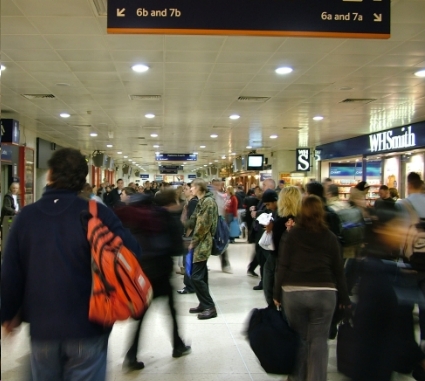 So the latest multi-million rebuild was begun and the first chunk opened back in April. For a non Brummie, it will be quite difficult to understand what has happened and what will happen to complete the project due in 2015. So let fbb attempt to guide you with a Google Streetview "45 degree" view of the undeveloped station. 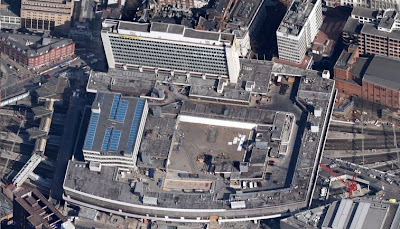 This shows the main slab of the over-line building, with the relatively recent extra "fire escape" footbridge far left, then, proceeding clockwise, the office block roughly on the site of the original Queens Hotel on Stephenson Street; the dark blob is the bottom of Corporation Street; the red brick building (Odious Cinema) featured later in our story; and, finally, bottom right, is the main "front entrance". This is where your taxi would deposit you until the recent revised layout came into use. 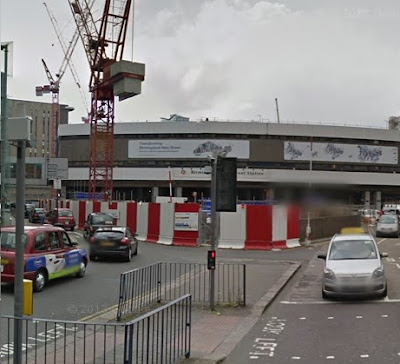 Note the red crane which also appears in the aerial view.

But most "walking" passengers would enter from the bottom of Corporation Street (the black hole, top and right of centre, in the aerial photo above). Pedestrian personages would perambulate up the ramp ... 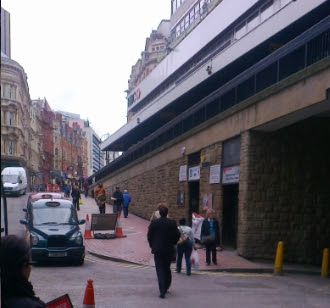 ... through the Pallasades shopping centre ... 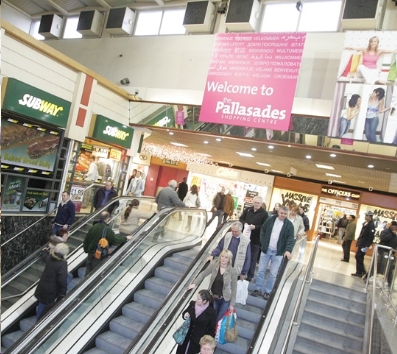 ... and down the escalators into the main concourse and booking hall. 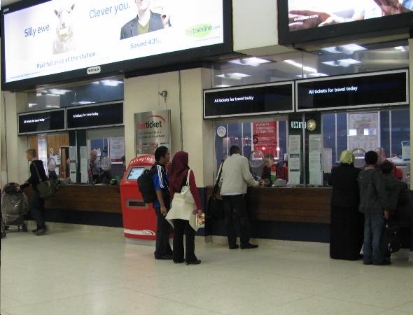 From here, intending travellers passed through the barriers and onto a footway linking all the platforms. Here it is from Network Rail's current web site. 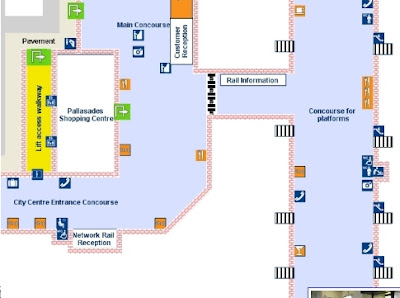 Shouldn't someone tell Network Rail that the station is being/has been rebuilt?

Because, Network Rail, almost all of this (except the footway) has gone. The old concourse is boarded off and utterly closed; even the pub, once a pleasant watering hole whilst changing trains ... 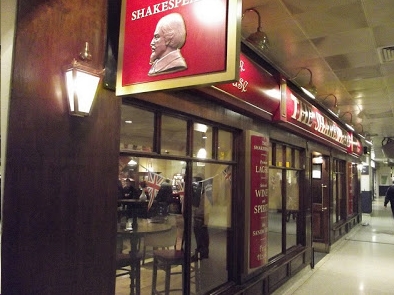 ... is now a darkened and abandoned has-been hostelry. 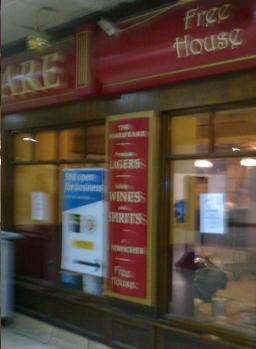 Stop sniveling, saddened readers, there are other pubs nearby!

So the New Street we all knew and loved (?) is no more. What has replaced the gloomy, busy, noisy, smelly from the (diesel) engines' smoke and often crowded station?

Well, happy passengers, half of the new New Street opened on 28th April; fbb visited in May and his assessment of what has happened and what will happen (when it's all finished) will continue tomorrow.