Remember the new network in Portsmouth, introduced with boundless enthusiasm by First Bus back in November 2012 (read again)? Well here's an extraxt from a press release, issued yesterday, from shh, you know who.

Amends** due to be made to First’s network in Portsmouth, Gosport and Fareham from March

Having reviewed the feedback from customers in relation to the new Portsmouth, Gosport and Fareham bus network, First has registered some changes to a number of its services.

So it looks like a "Whoops, we got it wrong!" situation : more info from fbb next week. 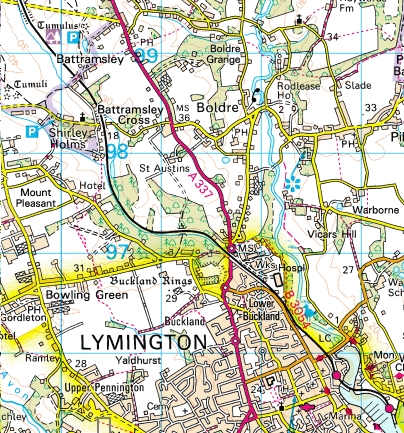 At first glance, the branch from Brockenhurst to Lymington does not appear to offer much excitement to the hardened ferro-equinologist or, more importantly, a mildly interested blog reader. Two red dots and a wiggly black line.

So let us "virtually" travel the line and see.

The line opened in 1858 and the first point of interest is this bridge over a country lane. 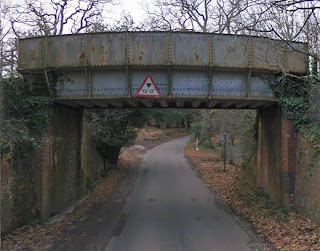 The distortion of the Google Streetview car-mounted camera does nothing to add the the potential (lack of?) excitement. Yet this was the location of a very unusual station. It was called Shirley Holms (or maybe Shirley Holmes) ... 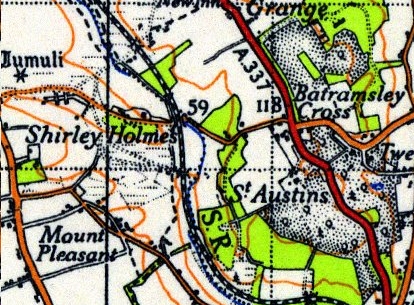 ... and never appeared on any railway map or on any printed ticket. It also failed to attract the attention of the late great Colonel Cobb and thus did not appear on his rail atlas. 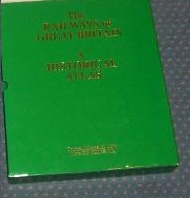 Shirley Holmes Station : on and after Wednesday, 10th October [1860], all trains running between Lymington and Brockenhurst will stop at that platform on the up journey to take up passengers and on the down journey to set down passengers. On the up journey the trains will not stop after daylight. Passengers for up trains must be in waiting on the platform before trains approach, otherwise the trains will not stop. Passengers by down train must inform the guard of the Lymington train when they desire to be put down at the platform. By the down trains passengers must have tickets for Lymington. By the up trains passengers must take tickets at Brockenhurst paying in addition the fare from Lymington.

Sway Station on the new line to Bournemouth was opened in 1888, and with improved road communications use of the platform gradually lapsed, and it was closed to passengers soon after the turn of the century.

From the oldest closed station on the line, we travel southbound to the newest closed station, namely Ampress Halt. It was situated approximately 1-mile north (1.6 km) from Lymington Town station near a bridge over the A337 ... 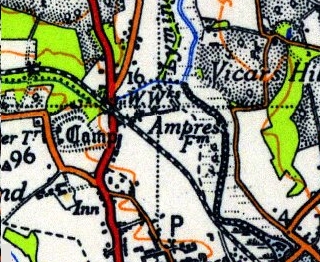 ... and it was primarily intended for workers at the nearby Wellworthy factory. Like Shirley Holm(e)s, it never appeared in any timetables (fbb thought : is this true?) and its demise came with the closure of the Wellworthy factory in 1989. 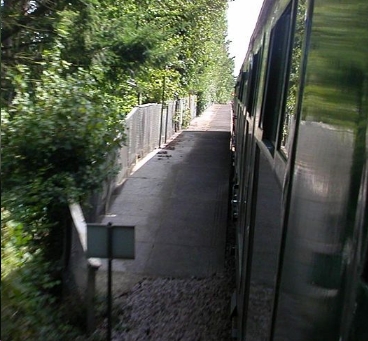 The platform is still in place and the area has been redeveloped including a new hospital, a retail park and housing. There have been hints that it might re-open ... this from a forum in 2005.

This morning green 3-CIG 1498 became the first train to call at Ampress Halt on the Lymington branch in over 15 years, when two normal service trains were stopped additionally for an inspection visit by Network Rail, SWT, Hampshire Country Council & Lymington Town Council. This is related to the proposed re-opening of the Halt in connection with the new Lymington Hospital being built on the adjacent former Wellworthys factory site which closed in 1989. Presume it will also give an indication of time lost on the existing schedule for timetabling. For information the trains were:-

Two NR field engineers were waiting on the platform for the arrival of 1J23 & about 8 people got off & were picked up again by 1498 on the returning 1J24.

Nothing has been heard of the project since!

The original (temporary) terminus at Lymington was opened in 1858 and built adjacent to the present Bridge Road, near the present level crossing. 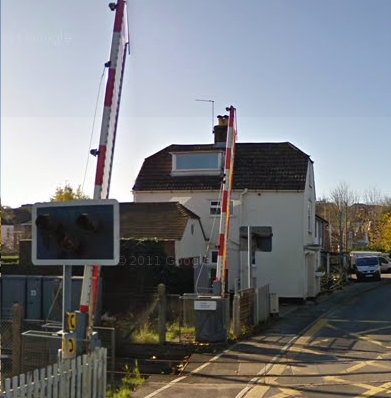 The building behind the old station premises still stand ... 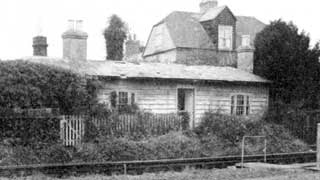 ... and the original building lasted (unused) until the mid 1950s but the new Lymington Town Station had opened in 1860.

The line as we know it today was completed in 1884 when a causeway and bridge was opened over the river to Lymington Pier Station (out of shot, center left). 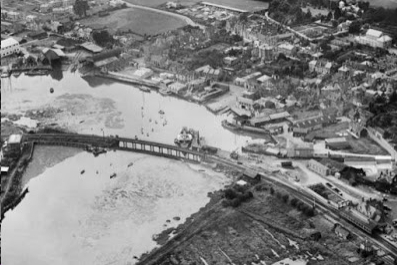 An old guide book extols the benefits of this little line ...

... and its links to the Western end of the Isle of Wight.

We look more closely at this link in tomorrow's blog.