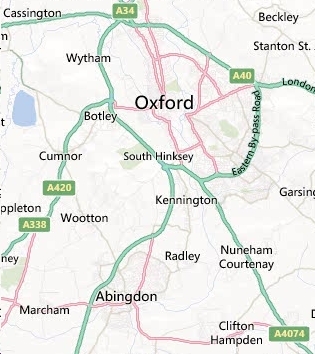 Historically the county town of Berkshire, since 1974 Abingdon has been the seat of the Vale of White Horse district of Oxfordshire. It is one of several places that claim to be Britain's oldest continuously occupied town, with people having lived there for at least 6,000 years. A particular claim to fame is that the town was the home of MG cars. 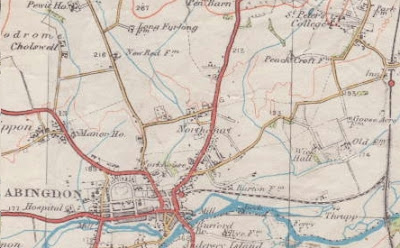 the Abingdon branch in the 1930s

Abingdon is the largest "unattached" town in southern England with no rail service; Gosport is bigger but closely associated with Portsmouth and linked to its Harbour station by frequent ferry, so, according to Abingdon, it doesn't count. 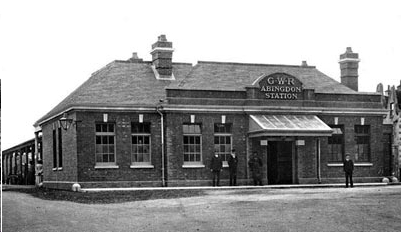 The Radley to Abingdon branch line closed to passengers in 1963 with the former Railway Inn being rebuilt as flats. 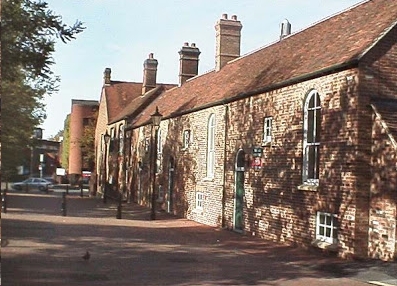 The centre of this one-time riverside market town has not fared well in the hands of the developers. A modern shopping precinct with many empty premises ... 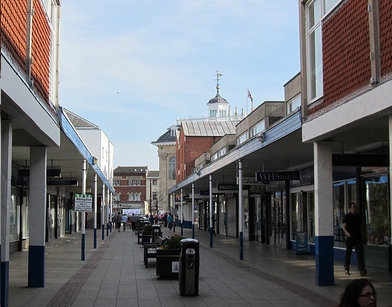 ... sits unhappily opposite the historic and magnificent Market Hall. 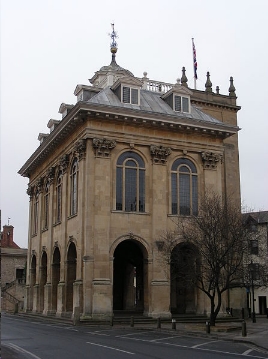 So, donning his "mystery shoppers" heavy disguise, fbb's first task on his  December 28th  visit, was to find the public transport. There is a signpost at the end of the shopping precinct ... 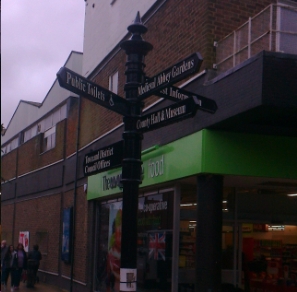 ... but presumably reading was not on the agenda for post-festive Abingdonians. fbb attempted to find the Tourist Information Office by following the signs, but to no avail until he remembered its location from a previous visit. It is well hidden as part of the Council Offices but, joy pf joys, there was ... 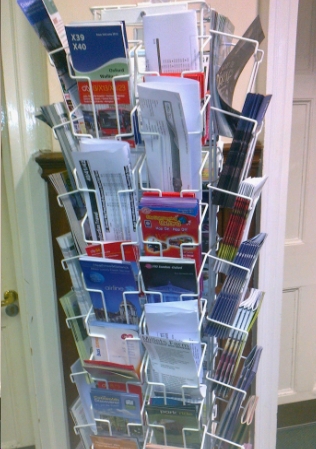 ... a carousel with loadsa bus leaflets.

The lady behind the counter was just a tad suspicious to observe a fat old man taking pictures of her rack of leaflets but was soon persuaded that the old bloke's intentions were of the best. Basking in the cosy glow of fbb's congratulations, she reported that Oxford City Bus (GoAhead) were very good at supplying leaflets, Stagecoach were poor and Thames Travel (also GoAhead) were appalling. "The only way I can get their leaflets is to drive to their office", she averred bitterly.

"By the way," she proffered brightly, "It's Saturday service today if you didn't know." fbb didn't and subsequent observation revealed not a single posted notice anywhere informing potential passengers of that fact. "I tried to get some Christmas leaflets. I asked a bus driver if I could have some of his," she added brightly, "and he gave me three."

So full marks to Abingdon TiC for trying. And poor marks to the operators and Oxfordshire County Council for not bothering. 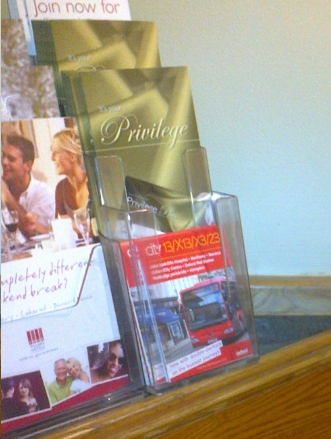 One small (very small) encouragement was that there were copies of one Oxford City Bus leaflet in the information rack at fbb's hotel. Sadly, no copies of leaflets for any of the services that actually stopped near the gaff. There is an hourly bus to Wantage (westbound) or Oxford (northbound) from those stops on Marcham Road. 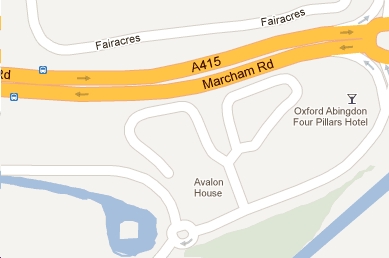 But armed with a fistful of omnibological literature from the TiC, fbb was now in a position to evaluate roadside information and the general quality of services on offer.


Next Bus Blog : Tuesday 15th Janaury
Posted by fatbusbloke at 02:00