the terminus of a Paris bus route ideal for tourists preferring sunshine to subterranean "Métropolitain".   It starts at the famous Père Lachaise Cemetery (Gambetta) with its memorials to oodles of famous french folk ... 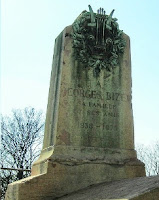 ... e.g. Georges Bizet who wrote the opera Carmen.  It ends at Champ de Mars (Mars Field - doesn't sound so good in English) where you would find a rather exuberant copy of something spectacular from Blackpool.  Or was it the other way round?  Surely not!

On the way you would pass (one way streets permitting)  Opéra, Bastille, Cathédrale de Notre Dame, Musée du Louvre, Les Tuileries and Les Invalides; a mini tour of the great City of Romance.

Now we insular Brits have a problem with using the website for RATP, Régie Autonome des Transports Parisien, the Paris transport authority. Johnny foreigner has written it all in French! Sacrébleu, formidable, quelle horreur, zut alors!   (but see below).  By clicking haphazardly on various buttons...

...we can certainly find lots of lovely maps.   Firstly a diagram version of the main daytime Monday to Saturday City services - a boon to the average tourist. 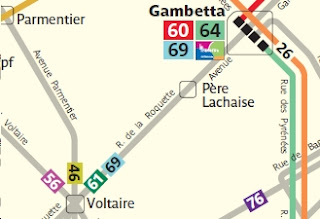 Then there is a fully detailed massive street plan showing every stop. 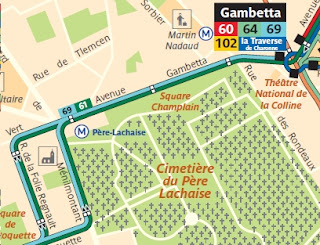 And, finally, you can navigate to a detailed diagram of every bus route.   Magnifique!   The terminus at Gambetta is the blob on the right.   Everything is consistently colour coded with a pale-ish cyan reserved for the 69 throughout. 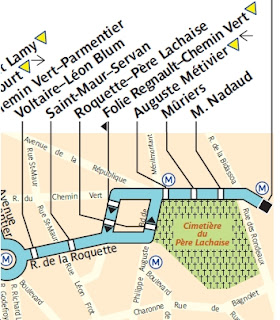 The french for timetables is "horaires" and there's a button so labelled. fbb becomes very "excité, animé, mème délirant" at the thought of real timetables.    But, "à sa grande déception" all he finds is this:-

Yet again just a list of the next available departures from Gambetta; not a timetable in sight.   Further persistent probing provides one of these:- RATP's stunning offering for "les horaires de la ligne".   Oh dear; and you thought London was bad. 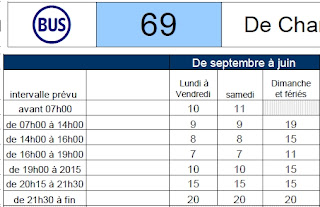 There are three similar panels, as here for most of the year, then special versions for July and August.   The frequencies are grimly difficult - every 19 minutes on Sundays, every 17 minutes mid-evening in Summer; even every 20 is tough on a cold winter's evening if you don't know when the last one left!

So timetable secrecy seems to be a pan European thing - one of the many astounding benefits of Membership of the European Union. London merely meekly follows where Europe leads.  Quel dommage. Perhaps that's why our friends from across La Manche have a reputation for laid-back timekeeping; they haven't a clue when the next bus will come! 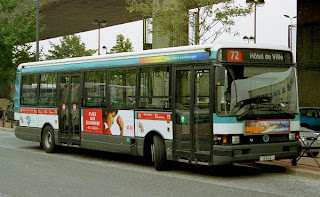 P.S.  At the top of the RATP home page there is a row of tiny little flaggy symbols.   Click on the Union Flag and you get SOME of the site in English.

But it's more fun to explore en français!

And finally!  This sign could produce a wry smile or two for the uninitiated.   We Brits tend to translate French into English literally, word for word, often guessing badly.

The wheelchair symbol is pretty universal, but the yellow triangle warns that the bus is unsuitable for users of "fauteuils roulants", literally "rolling armchairs".  So if you want to stick with your rolling armchair, don't try to get on a service 69 bus!  [It is, however, a more socially inclusive phrase than "disability buggy"; perhaps we should start using the English equivalent here.]

next blog : due on Sunday May 1st
Posted by fatbusbloke at 03:26