Who Could Have Predicted?


Thirty years ago, who could have predicted the massive improvement in train service frequencies?  A glimpse at rail times in the 1981 Sheffield Transport timetable is revealing.  This summary from Sheffield via Penistone to Huddersfield, approximately every two hours ... 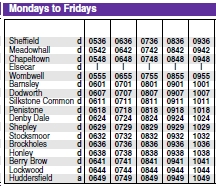 Sheffield to Barnsley every hour once morning "peak" was over ...

... now every 30 minutes until evening.  Stops at Attercliffe and Brightside have gone, but there are no steelworks to serve along the Don Valley.   A more useful interchange is now available at Meadowhall.

Sheffield Manchester fast trains were just every hour in 1981 ...

... now every 30 mins.  Two things to note here.  Travel South Yorkshire (whose 2011 timetables we have used so far) does not consider a service of fast trains to Manchester worth publicising, so we need to look at Transpennine's leaflet and, in so doing, ignore the Northern Trains slow all-stops journeys labelled "NT".

But the most dramatic change over 30 years is on the Sheffield to London run.  Then a train every hour, most taking about 3 hours ...

... and now, two trains an hour with the fastest taking just a few minutes over TWO HOURS; a truly astounding improvement!  (see below, for example, 0827 arriving in St Pancras at 1034.)

Who would have even dared predicting such an amazing series of events?
A bit like 2,500 years ago in Iraq**.  Some hairy weirdo**, he would have been called a holy nutcase today, believed, from the bottom of his heart, that one day his god would change the world.  His predictions would, almost certainly, have been laughed out of court then.   Who could have believed the possibility of such an amazing series of events?
500 years after the prediction, the "chosen one"**, Joshua by name**, would change the course of history. A change, not brought about by military victory, but by the huge personal sacrifice of one man.  Since the hairy one's predictions appear to have come true, countless billions of people have had their lives changed for the better. That's why it is called "Good" Friday.  This is an extract from the so-called "ramblings" of the hairy one, dateline 500BC!
He was arrested and led out to die,
was put to death for the sins of the people.
He was placed in a grave with evil men,
He was buried with the rich;
even though he had never committed a crime
or ever told a lie.
The Lord says,  "It was my will that he should suffer;
his death was a sacrifice to bring forgiveness."
And "Good" Friday was followed by an empty tomb on the Sunday, an event often challenged but, as yet, with no totally satisfactory earthly explanation.     Well, someone predicted this amazing series of events.
**Iraq was then called Babylonia, the weirdo was called Isaiah and we know the "chosen one" as the Messiah with his name, Joshua, more easily recognised by its Greek version, Jesus.   The passage in the old testament of the Bible is Isaiah Chapter 53 - even for a non believer it is very challenging!

And for those who don't see the connection between religion and travel (?), remember many of us enjoy a Bank Holiday because of what happened approx 2000 years ago.

next blog : due on Saturday April 23rd
Posted by fatbusbloke at 05:56