Remember the throaty voice of Lee Marvin singing (?) that song.  How appropriate for the unnecessary "Wanderin' Star" of train company liveries.
Brand is everything, we are told - but does it really help the image of rail travel if the brands are transitory, changing every few years?
First we were all part of "Inter City" and we knew where we were, who they were, and, broadly, where we were all going.

Then along came rail privatisation and the East Coast main line franchise was awarded to James Sherwood's Sea Containers group and began trading as Great North Eastern Railway, with a distinguished dark blue livery and a distinctive orange stripe, plus on board quality service to match.  "The Route of the Flying Scotsman" 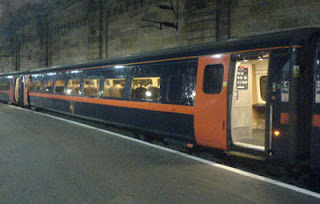 GNER was unable to keep the franchise and bevvies of chaps (maybe chapesses as well) from National Express began affixing white sticky tape to obliterate the orange. 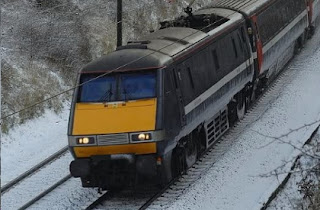 This was often done as the trains waited for boarding passengers at Kings Cross - with some trains running with orange stripe on one side and white on the other!   Next, National Express went multi-platform group wide livery for buses, coaches and trains; so they stuck bundles of knitting needles all over grey painted coaches. 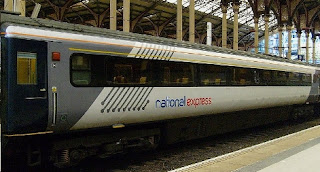 But NEx got their sums wrong and they, too, handed in the keys. Now we, the people, run the franchise via the nationalised East Coast Railway company.   So, obviously, to establish the fifth corporate identity in roughly 20 years, ECR starts rebranding yet again.   This time it's shiny silver with a puce stripe!   Looks rather tawdry, perhaps unfinished, especially when dirty, and a bit "American"? 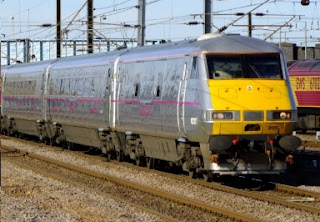 Don't worry, in May's "Modern Railways", contributor Tony Miles reports that ECR have dropped silver and will now repaint in grey.  Technically that makes it six!

It gets worse.  Once Mr Cleggeron decides what he is going to do with the railways, he has promised to let the East Coast franchise once again.   What's the betting this happens a year or so before the next election; the coalition then collapses and the fun (?) all starts again. Hey ho - we might even get liveries seven and eight!
Remember that we, the customers, are paying for the paint, the sticky-backed plastic, the countless hours of management time and, above all, the myriads of design gurus who invent the vital (?) corporate identity.   They charge mega-bucks!    But the canny wee fellas from Scotrail have come up with a better idea ... 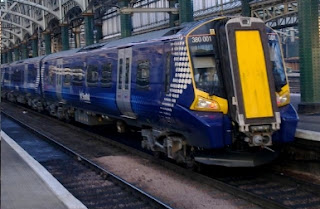 ... "we'll specify the livery", says Hamish & Co, "and whoever runs the franchise must use our design and call themselves Scotrail".   Thus, at one fell swoop [as first uttered, appropriately, by Macduff in "the scottish play"], we have a real, recognisable long-term brand.   At least, it will be when ALL the trains are painted!   fbb is not entirely sure about the Midlothian Measles style, but the concept is brilliant;
so how about ... 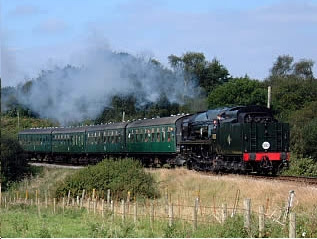 ... a nice malachite green for the three "Southern" franchises, 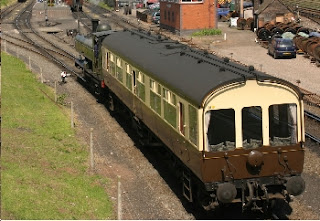 a rich chocolate and cream for any re-franchised Great Western company; and, fbb could go on,  [Please don't, says our reader, we get the point!]
Indeed the companies could start marketing rail travel nationally once more - perhaps the brand might be called "British Railways".   It's a wonder no-one has thought of that name before!

next blog : due on Sunday April 24th
Posted by fatbusbloke at 07:20