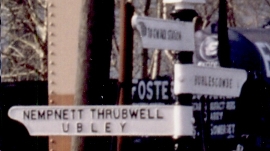 Yes it does exist!   It's a village approx 13 miles southwest of Bristol. St Mary's Church is a magnificent building dominating this hamlet of some 190 inhabitants. 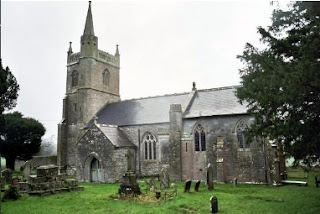 It was immortalised in at least two songs by the late (died 1974) great Adge Cutler of the Wurzels, who lived at nearby Nailsea. 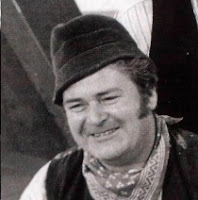 But, using all the resources of modern technology, can you get there by bus?   Transport Defunct doesn't seem to know what it is doing ...

... and offers several reasons - one of which is "because there isn't any"; and suggests that you "try again".  Maybe someone will have introduced a new route whilst the keys are tapped.
Whereas Traveline offers the following timetable search ...

...followed by a list of 11 services.   Having laboriously ploughed through them, it would appear that none of them actually serve that delightfully dottily named village.   Traveline invites its enquirer to look at maps of all these 11 services, yet another tedious and time consuming trudge through the tomes of technology - which fbb decided was a step too far.   And, anyway, there isn't a map button to click on! 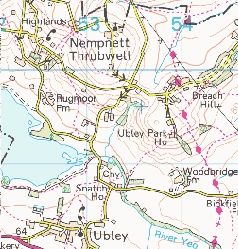 It is beginning to look as if the nearest fbb can get is Ubley.

Perhaps he should PHONE Traveline.   Does he  know no fear?  It costs money, and if fbb, with all his consummate skill in time tabulation is struggling, how will the highly trained staff of Traveline fare?   Oh, go on, be brave (and be apologetic - they might think it's a joke).
Three button-press menus later, a real person couldn't offer any reply unless fbb could say where he wanted to start from.   "Anywhere" doesn't work the computer.  Even the suggestion "Bristol" was unacceptable. Apparently, according to "the man", you have to know WHERE in Bristol - which fbb didn't!   How can you know where to depart from if you don't know which bus is taking you?
It's going well, so far.  The call cost about £1 and probably would have elicited "nul points" had fbb not been tenaciously persistent.  Helpful to the uninformed traveller - it wasn't.

Eventually, fbb was offered a a journey from Temple Meads (which definitely isn't central Bristol, shouldn't Traveline have at least known that?) with change onto a service 754 and a 36 minute (sic!) walk from Ubley. 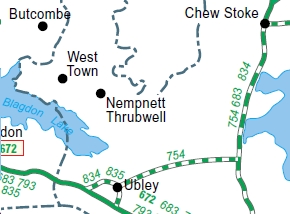 This useful map is from North East Somerset's web site. 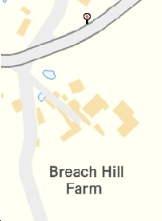 That would be better for fbb's arthritic limbs!   Sadly, despite admitting to a bus stop (the little red-and-black lollipop), Transport Defunct still can't find any buses that serve it.

O.K.   Confession time.   fbb didn't REALLY want to get to Nempnett Thrubwell by bus.   He has already been, by car, and, apart from the splendid St Mary's Church, there's not a lot to see.   A few cows, perhaps.   But, "and aye there's the rub" [Hamlet's "to be, or not to be" soliloquy from Bill the Bard of Avon], with all the latest expensive technology, no-one could give the simple answer, "there are NO buses to Nempnett Thrubwell and it's over half an hour's walk from the nearest bus stop.  Try a taxi."

A real man in a real enquiry office would have known that.

Unless, of course,  the ghost bus to Breach Hill Farm runs silently through the gloom at the stroke of midnight.  [sounds of "Scooby Doo" type wailing and cackling;  "we'd have got there by bus if it hadn't been for those pesky kids!"] 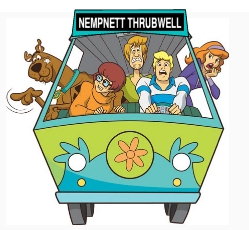 next blog : due on Thursday April 28th
Posted by fatbusbloke at 07:26