A Peerless Pier (at a Price!)

and the fourth longest in GB, too.


The first Ryde Pier was opened in 1814 as a promenade for pedestrians and a dock for shipping.   Prior to that, those crossing the Solent had to change to "tow boats" which were dragged on to the beach.   The 1814 pier was joined by a parallel horse tramway pier in 1864 which carried passengers from pier head to the newly-opened railway terminus located at St John's Road on the southern fringes of Ryde's built-up area..

To get there, the tramway passed through the ground floor of a house on "The Strand"; the railway really did "come through the middle of the house"!** 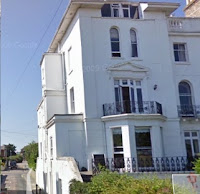 In 1880 the third of Ryde's adjacent piers was built to carry the "proper" railway to connect with the ferries. St John's Road (the road not the station) had to be raised to bridge the extended line.   This meant that the property on the corner of Monkton Street had to make new entrances at first floor level as the original doors and windows were buried.  The property does not look its best at the moment! 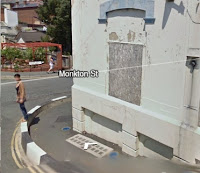 The tramway pier remained as a shuttle from Pier Head to the Esplanade until 1969.   This picture shows the tram in its final form:- 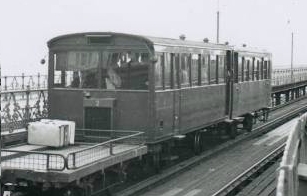 But recently a crisis developed.   The builders who were extending the car parking area at the Pier Head reported a "problem" with the main pier, now mainly used by cars delivering and collecting their precious human cargo for interchange with the catamarans.   The "problem" was that nothing much was holding it up!  An immediate closure applied from 4th August 2010.  More or less everything apart from the supporting poles has been replaced at vast expense and the newly refurbished deck opened on March 14th 2011.

But to pay for the work, Wightlink have re-introduced a pier toll for vehicles; now £1. Fair enough, perhaps, but a bit painful as cars have been able to pick up and drop off next to the ferries free of charge for a number of years.   But the jolly chaps at Wightlink announced a mitigation of the misery.
Pier Head parking charges would be reduced to compensate.  Hooray!   How nice of such a kind ferry company, renowned for its reasonable pricing policy all-round.    (Some readers might detect just an modicum of cynicism - surely not?)
So these WERE the parking charges with NO pier toll ... 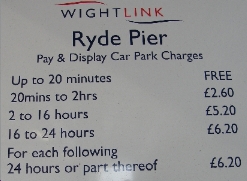 ... and these are the new charges, reduced to compensate for the ADDITIONAL £1 pier toll levied for all vehicles. 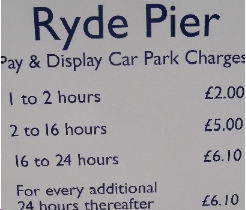 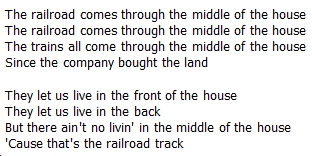 Acknowledgement : fbb thanks Alan for information and photos of Ryde Pier prices.

P.S. This sign, slightly mangled by Google Street View, dates from the days when St John's Road Station was the terminus of the Island line. It directs those just arrived from the train to the lavish sea front facilities.  It is at the top of Monkton Street on the fence of the currently-closed "Railway" pub,  opposite the building that was partially buried (above) and about a mile from the sea.   It reads "To Sea Front, Pavilion, Canoe Lake and Gardens"

Next blog : due Wednesday April 6th
Posted by fatbusbloke at 02:52