Power to the People?

This picture appeared in the local "rag" at Wellingborough, and NOT on April 1st. 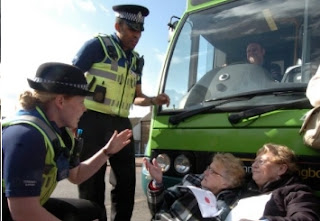 It shows two "senior citizens" holding a sit-down protest in front of a bus on a Wellingborough local route, one of a huge batch of "tendered" service likely to be withdrawn completely in the very near future.

Northamptonshire has announced that ALL its tendered service money with be "chopped" from April.

The local "plod" is seen trying to persuade the protesters to "come alonga me quietly" and get "banged to rights".   The driver is trying a look of abject horror but hasn't won any prizes at RADA!
It was a "set up", probably in a town car park if you look behind the bus, but Northamptonshire's reaction to the financial "crisis" is one of the most extreme.  Meanwhile, back at the county town...

... Meridian Bus announces that its is withdrawing from its service 86 and 87 circular services (also tendered by the County) from March 19th well before the funding axe falls. 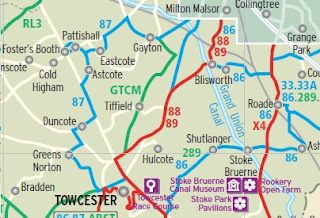 The Meridian web site claims that the service is not "secure", despite running it for two years!   The poor villagers of Pattishall, Stoke Bruerne ...

... Astcote and Gayton are beside themselves with fury.   Their two two-hourly circular (both ways round) services partly shown in this extract:-

are replaced, on a temporary contract, by a much poorer schedule, operated by Stagecoach.  A revised route and less journeys:- 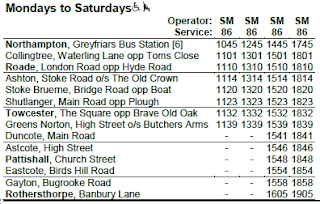 Pretty Pattishall gets a couple of 86s "the long way round" to Northampton (via Towcester) in the morning and a couple of circuitous 86s back, afternoon and early evening.   Not very conducive to "growing the market".

Historically, however, the new poorer service is similar to the frequencies that the villages used to get before the arrival of various rural bus grant funding packages.  In 1997 Goode's coaches could only manage this, to Pattishall;

whilst way back in 1979, United Counties provided only a sporadic three trips a day on route 333 via Gayton.

So the services have only reverted to their historic "normal", at least for the time being.   Even this could go soon - WILL go unless Stagecoach becomes super-philanthropic or manages to persuade the dozen remaining residents who don't have a car to travel more often.


But what of poor Meridian Bus, forced to give up this business due to a lack of a secure future?   Do not, dear reader, weep too soon or too long.  Meridian Bus already competes with First in Northampton with its busy service 31 to King's Heath Estate and its web site also announces a brand new service 42 from 18th April:-

Meridan is a little coy about  revealing the destination if its route 42 with the answer to life, the universe and everything.  Its website still advertised the 86 and 87 a fortnight after withdrawal!   But the secret is out in Northamptonshire's timetable library:- 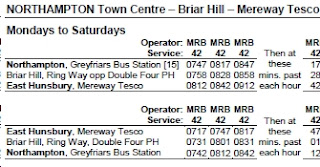 Meridian will compete with Stagecoach between Northampton and Mere Way Tesco.   fbb's guess is that the newcomer's bosses see more dosh on the Tesco road than they ever made pootling round Pattishall.

So the rural residents of South Northamptonshire lose their lifeline; whilst travellers toddling to Tesco get more buses than they need.  Is this REALLY the best way to ru(i)n Public Transport?   Nicholas Ridley, privatisation king 25 years ago, has a lot to answer for.

P.S. Maybe it's the latest craze.  This from the Plymouth Herald on 6th April.  See Plymothian Transport blog (here).

next blog : due on Monday April 11th
Posted by fatbusbloke at 07:07