How to make a complete mess ...
By Travel South Yorkshire [TSY]
We all remember Victor Meldrew, the irascible pensioner from "one Foot in the Grave", played with consummate skill by Richard Wilson. Many may also have spotted on-line or on Channel 4 his farcical attempts to get sense out of National Rail's voice recognition enquiry service.   (To watch and snigger, click here). 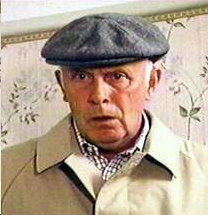 But, surely, fbb hears you cry "it's not really as bad as that, is it?"   OH, YES IT CAN BE!!!   fbb wonders how Victor Meldrew might react to the information on a bus stop at Ecclesall Church in Sheffield.   Details were logged by fbb in late March and re-created in a bloggable form upon his return to base.   For local residents, this IS the stop, at the end of Weetwood Road; used by fbb on various visits "up north":- 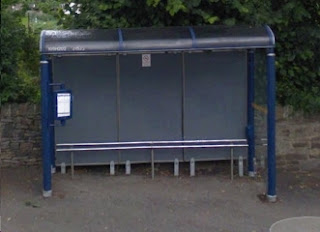 An exciting and stimulating picture, just an example of hundreds of similarly adorned stops!

The frame on the stop contains a heading which fbb has paraphrased as follows:-   "There are too many buses serving this stop to give full timetable information.   This is a helpful summary."   As an aside, please note that NO stops in ANYWHERE South Yorkshire give any timetable information; they only offer lists of departures from that stop. 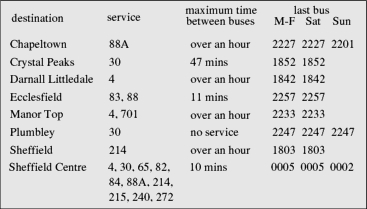 Overall, this piece of computer generated garbage is so ridiculous that it is hardly worth making any comment, but, as TSY maintains, in a lemming-like manner, its blind faith in technology (WRONG!) instead of people (usually BETTER), detailed analysis is important.  So here goes, line by line:-

The 30 runs every 30 minutes throughout the day Monday to Saturday and, at school times, there is, indeed one gap of 47 minutes.  But for 95% of passengers the service is evenly spread.  Computer, WRONG again. The last bus is at 1852.  Really? There IS an hourly evening and Sunday service to Crystal Peaks BUT because these particular buses continue to Plumbley the computer puts them on a different line, and doesn't admit to serving Crystal Peaks on the way. Computer, WRONG again.

Whilst it is true that the 83 and the 88 both serve Ecclesfield, they follow utterly different routes.   So the table completely misleads the passenger who may want intermediate destinations.  And (see above) the 88A's evening and Sunday route  is identical with the 88 to Ecclesfield but happens to continue to Chapeltown and, from 9th May, High Green. Computer, WRONG again.  Confused readers (and staff of Travel South Yorkshire) may like to examine fbb's map of heffield bus routes (here).   The routes are as from 24th July 2011.

This reaches the heights of daftness.   Service 4 to Manor Top only runs Evenings and Sundays; there are NO journeys Monday to Saturday daytimes.   The 701 is a schooldays only journey following a totally different route with no link whatsoever to the 4. Indeed, the 701 does not appear in TSY's on-line timetable library OR in any printed material.  Computer, WRONG again. 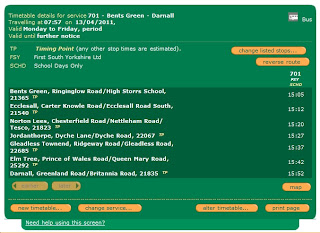 If you really, really want to catch the 701 in company with a crowd of howling school "students" [it's not "PC" to call the little brats young people "schoolchildren"] then click on the image above and enjoy your ride.

But back to the bus stop:-

The  daytime (Mon to Sat) service to Plumbley, a district of Mosborough to the southeast of the City,  is the 55 running locally from Crystal Peaks ONLY.  Evenings and Sundays, for operational convenience, service 30 is extended from its normal terminus to Plumbley.  Factually this line is correct, but totally misleading.

Of course, it is very obvious why service 214 runs less than hourly to Sheffield before proceeding to Sheffield Centre.   fbb knows they are the same place; our readers may well guess that they are the same place, but because someone has missed out the word "Centre", the thicko computer doesn't.   Computer, WRONG again.
IT people will tell us that the computer must be right as it draws its print-outs from a sustainable database. From a strict data management point of view, the computer IS right. It is, mindlessly, doing exactly as it is told. Sadly, the people who wrote the computer software and created the database would appear to have no common sense; and certainly no idea of what information the public might need or understand.
One last pointer to this appalling lack of intelligent thought somewhere in "the system".   Note the ten route numbers shown as serving Sheffield Centre. In fact EVERY BUS from that stop runs TO or VIA Sheffield Centre except the schooldays only 701!  So ...
Computer : utterly and completely WRONG in every possible way!
P.S.  For the real "hairies" amongst our loyal readership.  At vast personal risk and expense (?) fbb has lovingly compiled a full set of timetables, from 9th May,  for the complicated routes 83, 88 and 88A referred to above.   They may be viewed (here)   They are shown correctly, unlike TSY's and Stagecoach's versions which are also computer driven and thus WRONG.

next blog : due on Thursday April 21st
Posted by fatbusbloke at 03:45