All you Need to Know (do you care?) about
The History of Sheffield bus stops. 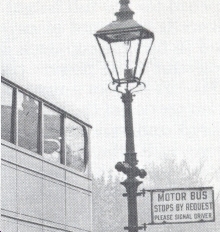 The immediately pre-war, and certainly post war, the standard stop in Sheffield was made from a heavy cast alloy.  This the basic bus stop; there were similar designs for trams. 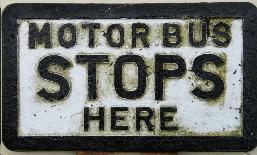 Also clearly displayed throughout the city were stops that were "Fare Stages", points at which the fare would leap to the next higher value by as much as 1 (old) penny. 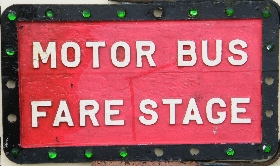 This particular design had green glass reflectors round the edge - presumably so platform staff could spot them in subdued lighting and charge the correct fares.  The bus route sign was also endowed with green reflectors... 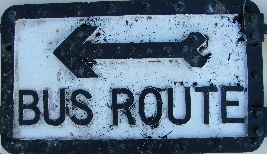 ...and the arrow was screwed on so that it could be rotated through 180° if necessary.   The fourth in the set was one of these delights.

Although not clear from the photograph, this was adorned by very pretty blue reflectors.  These signs were located mainly in country villages outside the main City area.  Meanwhile, in busy city locations (with multiple stops) and at Pond Street Bus Station, magnificent oak framed signs were installed.  fbb's was recovered from Vulcan Road, a main steelworks departure point.  It is in need of some refurbishment!! 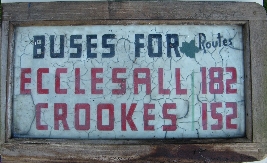 The lettering was painted IN REVERSE on the back of glass; a skill which seems to have been lost in recent years.   "What did you do for a living, grandpa?"   "Eee lass, I were a backwards painter at Queens Road Works."
When Pond Street bus station was "done up a bit" and renamed "Central Bus Station" new signs, also hand painted, but now on plastic, were installed.

Out "on the road" a variety of bits and pieces were used up to the late 50s - as here on Derbyshire Lane, newly served in 1959 as part of a tram replacement scheme. 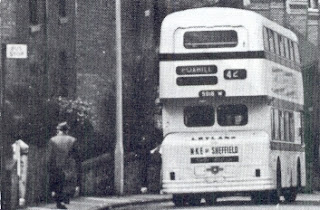 By the early 60s, a universal yellow "flag" with an entwined STD logo became standard and this was amended from 1973 by the simple expedient of sticking on a PTE logo label.  Again fbb's example is a bit "dilapidated",much like fbb himself,  but you get the idea.

fbb is currently searching his chaotic collection of old colour slides for a good picture - pro tem this will have to do.  For a brief period pre-1973 a whizzo new logo appeared on buses and stops supplanting the entwined and distinguished STD with a more prosaic "Sheffield Transport" as shown here, fuzzily. 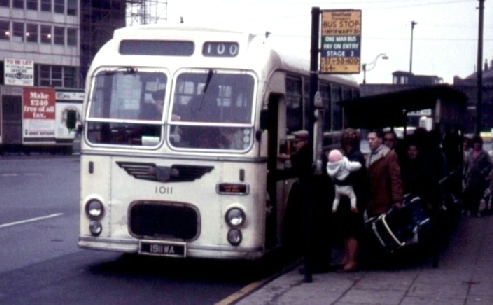 The lettering below the words "Bus Stop" says "via Infirmary Road" although the 100 doesn't go that way! Next comes white on green "one man bus, pay on entry", then very revolutionary; then the fare stage in white on blue and finally the routes that use the stop.   The photo was taken in about 1971, so the baby is now about 40.  Makes fbb feel very old indeed.   Only routes 57 and 58 run in 2011, via different routes but still serving Stocksbridge.

So, fbb, in contemplative mood as usual, wonders whether the assortment of modern bus stop adorned-with-vinyl designs will still be around in the another 60 years or so.   Unless longevity improves dramatically, fbb won't be around to check; but there might be the odd blog reader who will.   Maybe you have to be a really "odd" blog reader to bother?

Grateful thanks to neighbour and bus-chum Alan for taking photos of fbb's collection.

Lest you should dare to ask, ALL fbb's stop signs were gifted by Sheffield Transport Department.  fbb was NOT (most definitely NOT, even when just "bb") in the habit of shinning up bus stop poles with a screwdriver.