Or, has fbb finally flipped?


On a recent visit to Southampton (read again), fbb commented that he had obtained an excellent timetable book of all First's services serving the City. 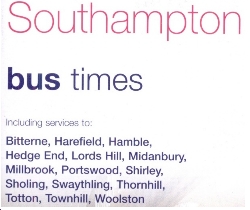 Not only is the book comprehensive for "First" routes AND comprehensible [out-of-town and University services operated by Bluestar come in two separate books.] but it also includes detailed route maps for most City services.   This for service 1 and 1A.   It is an excellent production and an example to all operators and local authorities.   Ace! 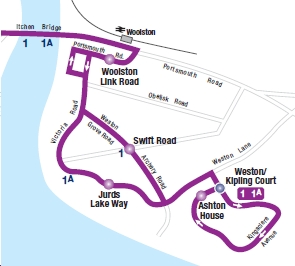 Similar style maps have appeared (still do appear) in leaflets for Glasgow services and main services in West Yorkshire.   Here for service 1 in Leeds:- 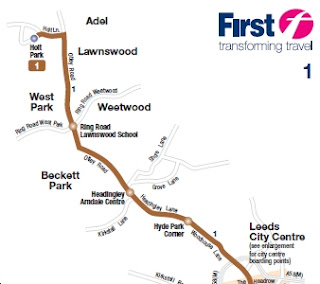 The use of colour combined with accurate naming and placing of selected key stops, ensures that even a rank outsider has some idea of where he might be and where he might be going.   The West Yorkshire leaflets with maps also include a detailed all-stops plan of the Leeds City centre.   Again, really useful. 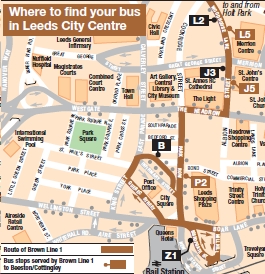 But, sadly, not all West Yorkshire services are so endowed. In Portsmouth, Southampton's immediate neighbour and under the same management (?), there is currently nothing; and in South Yorkshire, First leaves it all to the PTE - with grim consequences. This for busy service 40:- 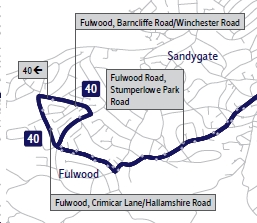 TSY cannot even get its own stop names right with "Crimicar Lane/Hallamshire Road" wrongly labelled!   fbb ought to know; it's the stop he used when living in that part of Sheffield for approx 15 years.
In daydream mode, fbb wonders what a more enlightened First management might be capable of?   Attractive, useful maps in Sheffield? 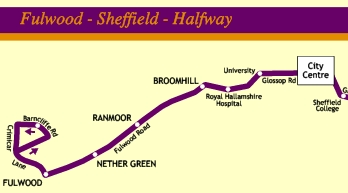 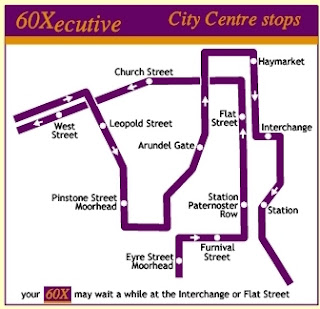 But, like Bobby Ewing stepping out of the shower and simply rewriting the previous season of  "Dallas" as "just a dream" [May 1996] ... 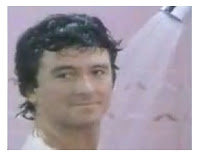 ... we can all dream ... Have a look (here) at a purely speculative map for a service that doesn't currently exist.
Perhaps the Fearnley regime might at least look at consistency of publicity with a view to making a "quality statement" nationally?   And the public might actually be able to work out where the buses go.   fbb suggests Southampton as a good example to follow.
Not so good news?  The Southampton timetable book already (in April) contains amendments.  These are explanatory notes without the appropriate timetables.   Poor.   A whole range of changes, mostly negative, come in to force on 12 June.   Will First have a new issue of their "excellent" book in good time for the change?

next blog : due on Friday April 22nd