How to Use the Internet


It was Elsie Miggins who started it.   She said that Florrie at No 24 had told her that Mrs Whats-er-name; you know, the one with the deaf cat next to the pub, had heard that the 50 bus was changing at the beginning of May.   Her husband, Jack, was going to look it up on  his new computer; because, according to Jack, "you can find anything on line, these days."

the one with the deaf cat
How might Jack research the changing No 50?   Maybe the best place is the usually excellent Derbyshire website,

as No 50 runs from Chesterfield to Sheffield via Eckington?   [once service 62, joint between Chesterfield Corporation, East Midland and Sheffield Transport] 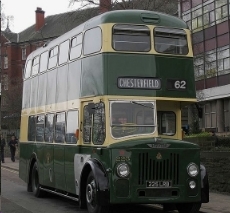 Sadly, and unknown to Jack, Derbyshire is having problems because the contractor who typesets its timetables has gone bust, so ...

... he only knows that it will change and thus the world now knows that Mrs Whats-er-name was right.  It's a start.   It only takes FIVE clicks to get to this information, by the way, assuming you click correctly each time.   So now the obvious place to look is Stagecoach's website,

which "one-clicks" to the timetables pages.  Perhaps that might help?   Only FOUR further clicks get you to a drop-down menu for Chesterfield.   Where's service 50?   After 49?   In numerical order?   No way!

It comes AFTER service 98, in a little block with 25 and 99.   Sadly, having navigated Brian Souter's strange concept of numerology, the only offer is "current timetable".

As an aside, Jack might like to look at a route map of the service.  So another click or two on "route map, view" and, hey presto ...

... no map and back to the welcome screen!   Another huge success for technology.   Jack should be pleased that he has a new computer because the Stagecoach web site refuses to work unless you have the very latest Microslop Windslow upgrade.
fbb guesses that Jack would now give up, wondering why he bothered to buy the ****** computer in the first place.  [readers fill in their own choice of brand name - or other descriptive epithet!] But a resolute IT enthusiast MIGHT just try the other end of the route. Yipee, it's Travel South Yorkshire and its new swirly web site!

Failure again.   Three clicks later, that's the old timetable.    So where next?   News and Updates?

Maybe there is some hope here.   In the "bus" panel it shows "Sheffield (1)"; but that's roadworks at Balby so Jack would have followed the wrong trail there.   What about "Future Changes"?

Don't bother with "new Services" because that only shows "71" which  isn't a new service, just a new number for bits of the former service 70.   Confused?   Keep going and try "future service changes".

99 is changing.   Alas, clicking on these headings produces a nul response.   The only timetables currently available are for those services shown in bold text; but the site fails to explain that.   And the 50A, 50 and 99 aren't in bold.
So, equipped with the unimaginable power of the internet, and an all-singing, all-dancing new computer, Jack is well and truly stuffed.   He can't tell his wife, Mrs Whats-er-name, who can't tell Florrie who fails to inform Elsie Miggins when the No 50 might come - in early May.
And don't even CONSIDER traveline; that offers nothing after 29th April!

Jack might even ring the usually well-informed fbb - but even the corpulent one cannot comply with Jack's request!  fbb DOES know, however, that from 8th May, service 99 is renumbered 50A and the times, they are a-changing.  AND the 50A is NOT a "new service", TSY, it's the 99 renumbered!  To begin to unravel all this, fbb did not use his crystal ball or visit Gypsy Rose Lee, he managed to trawl the depths of "service updates" c/o stagecoachbus.com:-

So fbb knows a bit more than Elsie Miggins.   But, as yet, the actual timetables are a closely guarded state secret.   You might, perhaps, think that nasty huge Stagecoach is keeping the timetable hidden because of "the cuts", fearing pitchforks at dawn in Eckington.   Not at all.   The service is being INCREASED between Sheffield and Eckington from hourly to half-hourly.   And details were formally registered, electronically, with the Traffic Commissioners in early March.
So a month later, with the astounding benefits of  21st century technology, we still know nothing, much!
Does the government; do the bus companies; do the web designers; do all these clever folk REALLY think this is the best way to publicise bus service changes?

P.S.  Nothing to do with service 50, but a good Travel South Yorkshire "bludner".  This extract is from the Supertram Link new timetable from 8th May:- 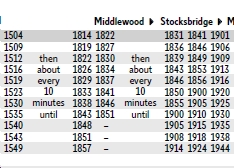