In 1861 two ferry companies operating jointly between Southampton and the Isle of Wight merged to fight off competition from an upstart third operator.   The "newcomer" was ultimately taken over in 1865. O, the joys of deregulation, even then!    The 1861 company was registered as "The Southampton Isle of Wight and South of England Royal Mail Steam Packet Company Limited", still the longest company name in UK.
In 1935 it adopted the trading name of ...

... something to do with the way the vessel was painted.  (!)  As its full name suggests, the company ran a variety of leisure services to several destinations along the south coast but by the early 1960s had settled down to providing a passenger and car ferry big-boat service to West and East Cowes on the Isle of Wight.   fbb remembers his first vehicle ferry trip back them.  The vessel was a bow loader ...

... and vehicles were spun round on a turntable in the blunt end (called "the stern", we believe) so that they could drive back off easily at the sharp end (which was also quite blunt!) upon arrival at East Cowes. Cars could also be unloaded through a side door at West Cowes.  Because of these West Cowes calls, the timetable was not as simple as "every hour".  Two of the original vessels, known as the "Castle" class, were subsequently "stretched" and provided with a stern ramp.   Netley Castle joined the fleet in 1974 and was the first purpose built RORO [roll on roll off] ferry for Red Funnel. 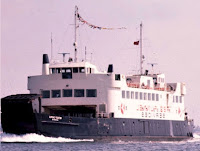 But in 1969 a minor revolution occurred with the start of a fast ferry service between Southampton and West Cowes.  This was the very first commercial Hydrofoil service in UK.   The picture clearly shows how such a vessel works.  As it gains speed its hull rises up on "foils" which work like an aircraft wing but in the water. The crossing time was just over 20 minutes as opposed to and hour or more on conventional ships. The "Shearwaters" were fast but noisy, bumpy and often smelt strongly of diesel fuel.  They also couldn't operate in fog, simply because they couldn't travel slowly enough.

In 1989, to howls of protest from the motoring fraternity of West Cowes, the big ferries stopped calling there and a more memorable hourly service was introduced to East Cowes only.   The first quieter (and bigger, smoother and less smelly) catamaran "Red Jet" arrived in 1991 for the passenger only route.

It is successors to this vessel that, today, maintain the half hourly service to West Cowes.   Meanwhile, back on the car ferry route, April 1994 saw thwe arrival of the first of three brand new "Raptor" class vessels, the "Red Falcon". 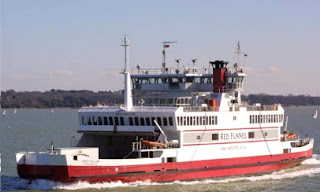 After only 10 years' service these boats were, literally, chopped into four large chunks and an extra bit addded in the middle to make them longer, plus an extra deck to make them taller.  Now they can carry 220 cars at a time. 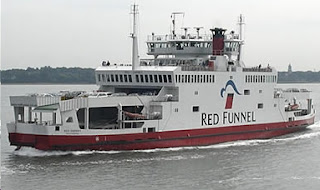 On the downside, however, the boats no longer have enough inside seating for a full load.   So bring your sou'westers and oilskins if you are travelling in bad weather!

Back in the 80s, whilst Wightlink introduced the dreaded "computers" for bookings, Red Funnel still used hardboard clipboards with lists of names written down with a "pen"; and a friendly gent in peaked cap, white shirt and smart uniform (with golden buttons) checking you off in the departure lanes at the East Cowes terminal. It all seemed efficient enough and, somehow, made the homeward journey feel a lot better.  Alas, no longer: that personal service has long gone and Red Funnel is computerised.

The obvious benefits are; for the passenger, much longer check-in times and longer queues to buy a ticket whilst, for the poor residents of East Cowes, huge tailbacks at busy times as cars attenpt to break in to the terminal area.   Progress indeed - NOT.

next blog : due on Wednesday April 27th
Posted by fatbusbloke at 04:30