Buried in the bowels of the official Red Funnel web site is a detailed history of all the vessels owned.  Many do not have pictures; which is odd.   You would have though the company might want to remember what boats it owned.

This is "Ruby", the first iron boat, taken over from a competitor in 1861 and used for excursions to Swanage.  It was one of the four boats that gave their names, more their colours, to the company flag.

The other three were "Pearl", "Emerald" and "Sapphire".   This next picture, again from Red Funnel's site, shows the first vessel to carry the "Balmoral" name docked at Sandown Pier. The boat was in service from 1900 to 1947.  Its more celebrated namesake successor is now owned by the "Waverley" company and returns to the Island with a nostalgic cruise programme every year.

One little-known development between 1933 and 1938 was the operation of a fast Solent crossing.  The motor launch was called "Sea Coach Island Enterprise", carried 11 passengers and made the crossing in 35 minutes.   The excellent book, "Red Funnel and Before" by R.B.Adams (published in 1986 and available second-hand on Amazon), gives details and this picture:-

So, get to the point fbb.  In theory, at least, the modern fast "Red Jet" passenger-only service ought to be a link in one of the best examples of multi-modal integrated transport in the country.   Here is a theoretical journey:- 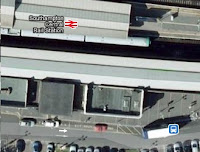 But how practicable is such a trip?   Seven minutes at West Cowes to buy your ticket; risky, so catch a bus 10 minutes earlier; doubly risky at peak times, the ferry doesn't take standing passengers.   The crossing and thus the connection with the free bus is generally very reliable with no traffic jams on the Solent Crossing.  But the advertised crossing time of 25 minutes, a bit like plane flight times, can be extended if parking the boat is tricky or alighting passengers are a bit on the slow side.

Six minutes at Southampton Central station to tramp across the footbridge and catch the fast train.   Easy-peasy if you have already bought a through ticket but not so do-able if you are less than certain and unwilling to buy your ticket at West Cowes, preferring to deal with a proper "railway" man.

So leave half an hour earlier to be certain and your journey now totals 3 hours and 14 minutes - far less attractive.

"Wouldn't it be luvverly" if you could book a through ticket from Newport?   But you can't.   Once upon a time you could buy rail tickets at Newport bus station, but no longer.   And even if you could, there would be two "add-ons" to your rail ticket, namely ferry and bus, and "the system" does not allow that.

So you have a choice.   Take a risk; suffer stress and anguish and HOPE you make it in 2.5 hours approx or dawdle for 45 minutes longer and be bored out of your mind on an unnecessarily tedious trip.   Or, maybe, battle with the interweb and book rail plus ferry in advance and thus enjoy the privilege of ploughing through the railways' neat, tidy and easily understood fares system for an hour or so. 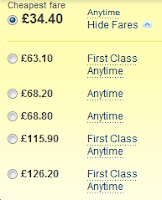 There is no technological barrier to selling integrated tickets for integrated journeys and accurately disributing the proceeds amongst the journey's constituent companies.   The barrier is "the bottom line". What's in it for us?   Will it increase our revenue stream?   Or, to put it another way, it's all too much hassle for the three separate companies involved.

next blog : due on Friday April 29th
Posted by fatbusbloke at 06:27