Shed a Tear for Tyne and Wear


Researching information for his brain stimulating blog about the Lambton Worm (read again), fbb was convinced that Lambton is now a district of Washington and is NOT served by the Lambton Worm bus.  But, muses fbb, which bus route(s) do serve that historically named suburb?

Transport Defunct seems unable to find the place, despite it being clearly marked on Google Maps ...

... and the Village Centre showing up splendidly on Google Street View. 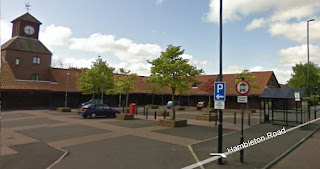 Nexus (Tyne and Wear Passenger Transport Authority as was and is) provides maps which clearly indicate that fbb is not going completely potty (yet!). 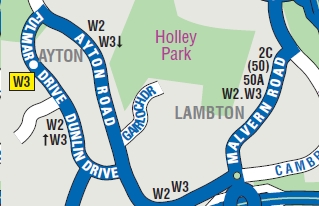 So,off to the Nexus timetables list (comprehensive, we are told) to look up the W3 ...

... a bus journey to Lambton.    Heeeeelp!   Now if you are still meandering through this mysterious and muddled maze, you might remember that fbb was unable to find anything that matched "Lambton" on the TD screens.    Well, take another funny pill, grin hysterically, and keep going.
It appears that the "current" [ha ha!] Washington area bus map was published in February 2010; there has been some reorganisation, and the W3 (that's the Washington W3, not the Whitley Bay W3, of course!) has been incorporated into the M2/M3, which, together with the 50 and the 2A, all serve the pulsating life-enhancing centre of Lambton Village.  Are you still awake at the back?

So we arrive at some conclusions at last.   Firstly it is incredibly difficult for the "innocent abroad" to prise reliable and understandable information out of the dreaded computer.  The algorithms for naming stops seem to have been designed by a slightly inebriated lobster, arranged, as ever, to make the technology work but not to help the user.  And secondly, why oh why, when amending "stuff" (like maps) on a computer is dead easy, do we have to be presented with out-of-date and misleading on-line cartography?
We spend £50 million of our taxes on Transport Defunct plus additional oodles via Nexus and the bus companies for Traveline; and still they produce garbage!  [At least one of the 11 Traveline regions, and by no means the biggest, costs the council-tax payer £6 million AND we have to pay through the nose for prising our information out of the system via the call centres.]

P.S. fbb cobbled this map extract together whilst waiting for his kettle to boil.  Even easier with the right kit!   fbb is always open to offers from Nexus. 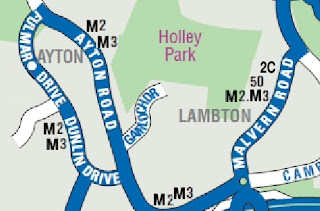 And then there's even more confusion when you start looking for New Lambton, which, as its name clearly suggests, is older than Lambton and in a completely different place.    Maybe an opportunity for further blogs about befuddlement?