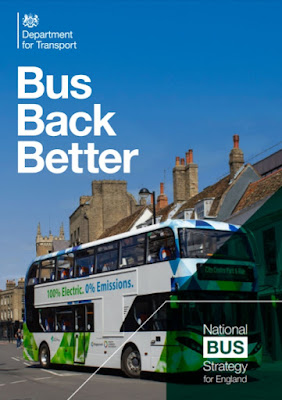 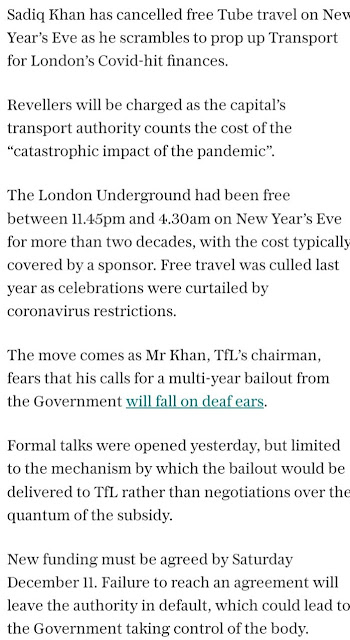 Nationalisation of London Transport? Probably not, but those politicians who are praising "The London System" and demanding it for their area may well want to do a rethink. London may be the answer if the pot of money is deeper, or even bottomless - which it isn't!
In The Shires 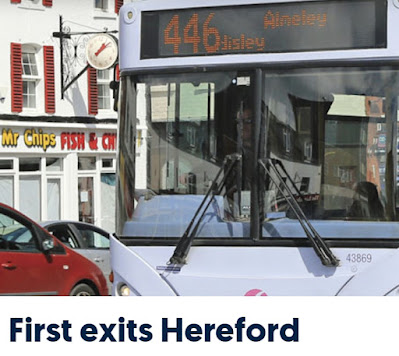 Above was the headline in 2015 when, shock horror, First Bus walked away from its Hereford network. First said the routes were not economically viable, other observers suggested that First had made a pigs ear of running them for many years.
fbb well remembers one reorganisation of the city's bus routes which First messed up. The consequence, until the incompetence was resolved, was that buses were ending their duty at a terminus, running light back to depot and passing their replacement running light from the depot on the way! The bus departing often left a few minutes after the arrival arrived. It was a total mess.
But local operator Yeomans stepped in to run the network commercially.
Hooray!
Until, now , that is. 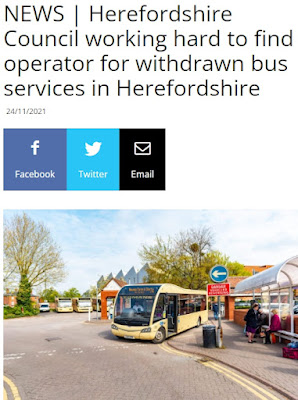 This from Hereford Council
Local bus operator Yeomans has provided notice that it intends to withdraw a large proportion of its commercial services in Hereford from 1 January 2022.
The council has held discussions with Yeomans to request that they delay their withdrawal of services until April 2022. This would provide time for the council and local operators to plan and put in place alternatives to ensure continuity of service for people currently reliant on Yeomans bus services. Yeomans have declined this request.
The council is holding discussions with other operators regarding replacing the withdrawn services, or putting in place alternatives on a commercial basis so that some continuity of service might be maintained. Due to the very limited timescales involved it is unclear if any operators will have sufficient time to put alternative services in place.
And this from Yeomans (expurgated by fbb_
Yeomans Travel have made the difficult decision to withdraw most of their commercial bus services in the City of Hereford, the last day being New Year’s Eve, Friday 31st December 2021.
Yeomans Travel has been family owned for over a century and currently provides bus and school services, contracts, private hire and holiday tours. In September 2015 we stepped in and kept the bus services running when First closed their Hereford depot citing that it was not viable to operate with such low passenger numbers.
Most of the Hereford city bus services are run on a commercial basis without any Council subsidy. The Government had given financial support to all bus companies during the Covid crisis to keep some services operating but this finished at the end of September. Since then we have continued to operate these services without support but this is not sustainable.
We are upset that the Council have not even mentioned the reason we are stopping these services in their press release. When we informed them, with the reasons behind it, they offered no assistance or asked what they could do to help other than to ask us to carry on until April. If it is not financially viable, why would we continue until then? There was not even a thank you for stepping in with six weeks’ notice and solving the problems 6 years ago when First did the same thing only on a bigger scale.
They've got a point!
Yeomans then list the services that will cease to operate from after December 31st. The company then continues:-
We had given Herefordshire Council the statutory notice required before withdrawing these bus services and they have already published a tender to operate emergency timetables on these routes, which they also failed to mention. These will now be financially supported, if we had been offered this we would have continued operating these services which would have meant no disruption to services at all and saved a lot of time and effort all round.
The Hereford network is, and always has been, a mess. The map displayed on the Council web site shows how complex bus provision is in the city, 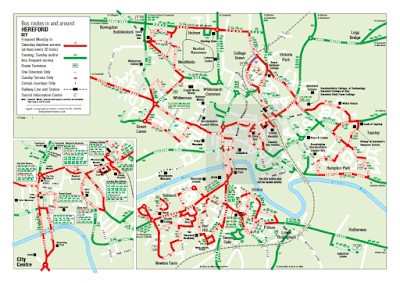 It is a PNG file, so does not enlarge very well, but please feel free to click on the graphic and enjoy! fbb suspects that the map is not up to date!

Roger French has written an extensive blog reporting on his recent visit to Hereford. Search under "Bus and Train User blog".

There is going to be much more of this as 2022 progresses. 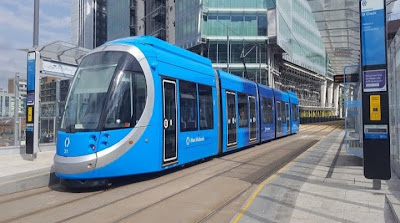 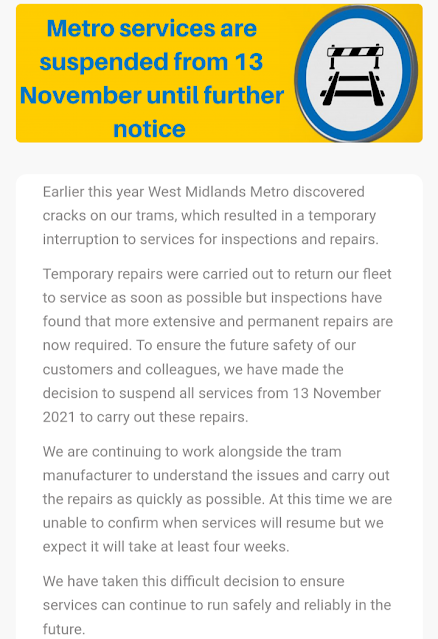 The problem with CAF trams is world-wide. Here is Newcastle Australia. 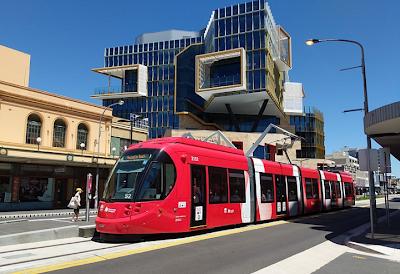 No timescale but a "temporary" closure.

But here is Sydney! 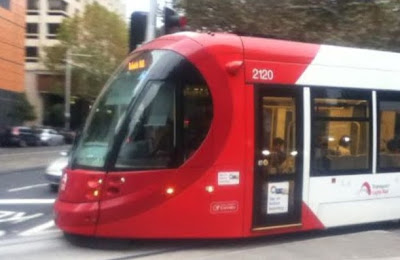 With a fairly vehement comment by the politician in charge! 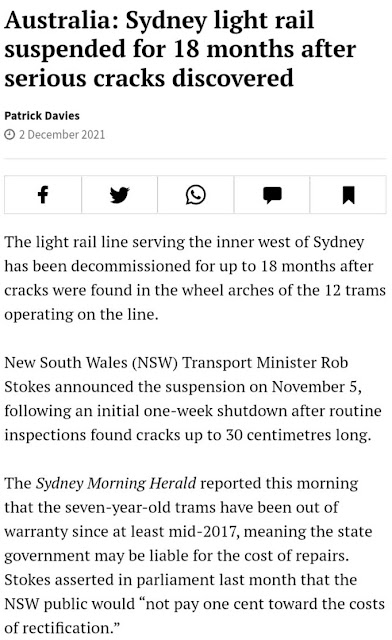 Too right, sport! If 18 months is true it doesn't look good for Brum.
But it actually looks a bit worse for those in charge in the West Midlands. 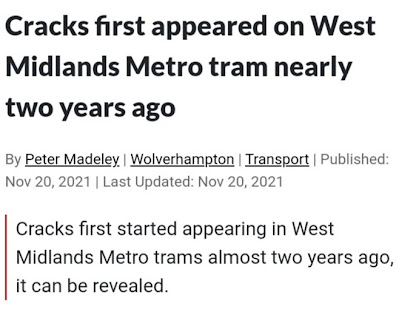 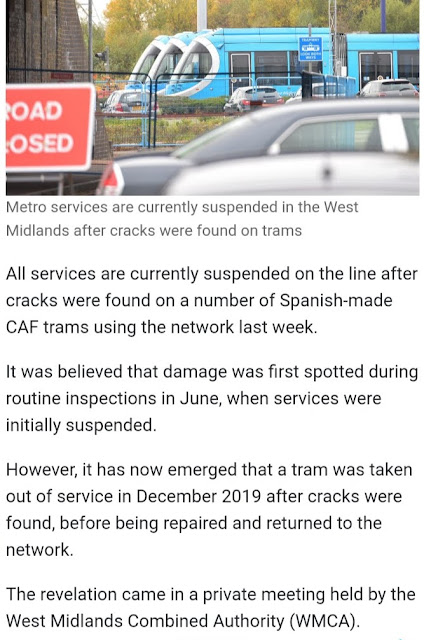 As Jasper said over a glass of sterlised milk** ... 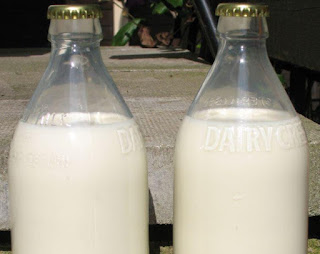 (please adopt brummy accent) "What do yo expect if yo buy from these foreign blokes? The old 'uns didn't crack, they only rattled!" 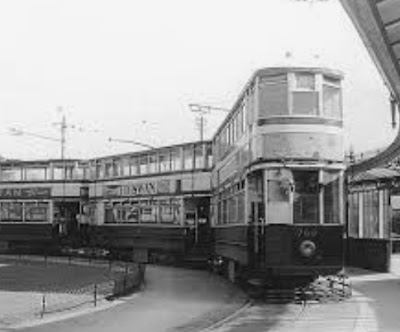 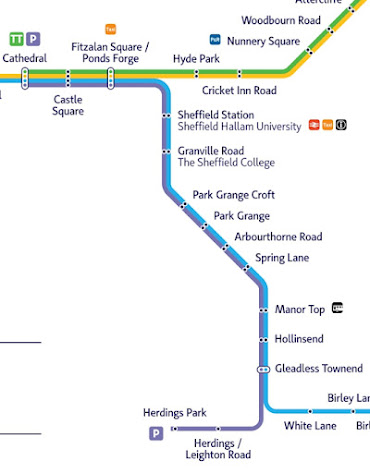 The Purple tram route was always an oddity. It travelled just two stops beyond Gleadless Townend, servIng the fringes of the Herdings Estate ... 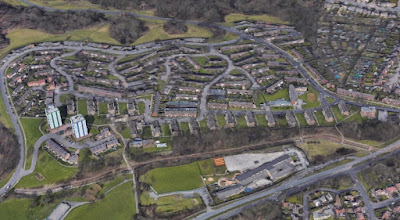 ... with the line running from Herdings Park (above bottom left) to Herdings Leighton Road (lower right). Originally trams reversed at the Cathedral and trundled off to Meadowhell. The concept of the services was to augment the frequency from Gleadless to City (Blue) and augment services to the ever-populat shopping paradise by duplicating the Yellow route. In so doing it provided trams from Blue stops to Meadowhell.
Over the years services to Meadowhall have been progressive reduced until the Purple service now only runs from Herdings to City.
In the latest re-jig (to cover staff shortages, we are told) the Purple route is now ... 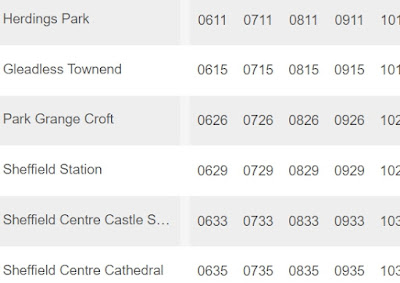 ... every hour Monday to Saturday! Oddly, on Sunday, it runs every half an hour.
You might think, OK, Why bother? There is a bus every 15 minutes passing both tram stops.
Next Economical bus blog : Monday 6th December

As a parent of three children, one deceased, two very much adult, your believing blogger is well aware of the risks of giving children their freedom. You are pretty much certain that sooner or later they will blow it and trouble will ensue.
But what makes us human is that gift of "Free Will". We can use that gift to compose gorgeous music, to write noble or challenging words, to paint richly moving art and to serve others through kindness and hard work.
Or we can mess it up. 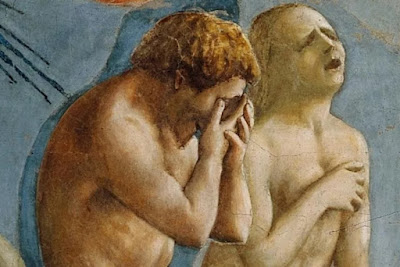 The Expulsion from the Garden of Eden is a fresco by the Italian Early Renaissance artist Masaccio. The fresco is a single scene from the cycle painted around 1425 on the walls of the Brancacci Chapel in the church of Santa Maria del Carmine in Florence.
Then the Lord God said to the snake, “I will make you and the woman hate each other; her offspring and yours will always be enemies.”
And he said to the woman, “I will increase your trouble in pregnancy and your pain in giving birth. In spite of this, you will still have desire for your husband, yet you will be subject to him.”
And he said to the man, “You will have to work hard all your life to make it produce enough food for you. It will produce weeds and thorns and you will have to work hard and sweat to and make the soil produce anything,"
So the Lord God sent them out of the Garden of Eden.

The perfection as provided in the Garden no longer applies. Life is now a struggle.