Some excellent printed publicity (remember when we used to have that!) accompanies the soon to be launched electric buses on Route 28 in Dundee. After launches in Greater Glasgow of a mega-fleet of electric single deckers by McGills, this shows that the new owners of Xplore Dundee (McGills) really do mean business.
And, talking of McGills ...

The Confederation of Passenger Transport (CPT) has announced that Ralph Roberts, CEO of McGill’s Buses, will become the new CPT President at the end of January 2022, taking over from Jane Cole. Ralph brings with him over 40 years of knowledge of the transport sector and has spent the past 12 years as Chief Executive Officer of McGill’s Buses, where he is responsible for running Scotland’s largest zero emission bus fleet and leading a workforce of 1,500 employees. 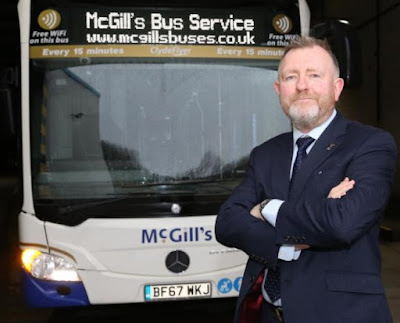 CPT Chief Executive Graham Vidler said: “I’m delighted to once again welcome Ralph to the CPT team having twice previously been Chair of CPT Scotland. His extensive experience in the transport industry will be a huge asset to CPT.”

Ralph commented: “I’m delighted to be stepping into the role of CPT President. Jane has done a fantastic job throughout 2021 and I’m sure she will continue to do so. I’m looking forward to getting to know CPT members across the country, especially those outside of Scotland, to help them to get the most out of their membership.” 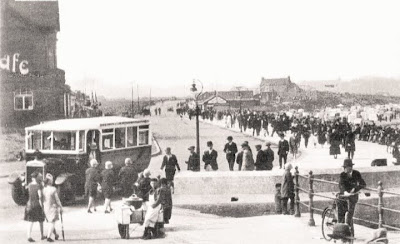 The "gentleman's agreement two-company operator began their service in 1925 from Whitburn Colliery to Seaburn in Sunderland, where it connected with the corporation trams. 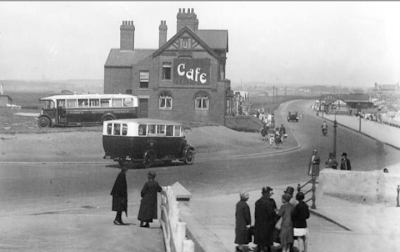 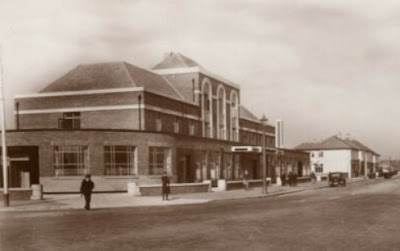 ... in turn replaced by a complete rebuild, now extended and named The Grand. 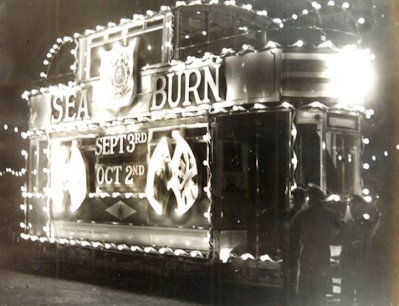 The caption to this picture does not explain what is being celebrated at Seaburn between September 3rd and October 2nd - or in which year. But fbb suggests that the sea front illuminations were operating at that time of year complete with decorated tram. 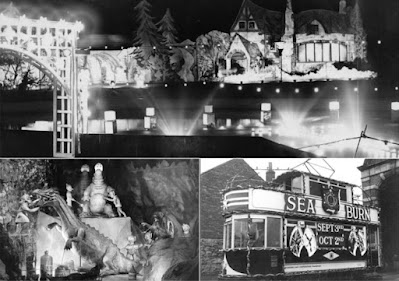 After a small start at Roker in the 1930s, the lights returned in 1949 for a 30-day season and this time the seafront at Seaburn complemented the display in Roker Park which boasted gondolas, Disney characters as well as wood nymphs and hobgoblins.

During the first weekend the lights attracted almost 250,000 visitors and, by the end of the four weeks, the number had risen to almost 4 million. 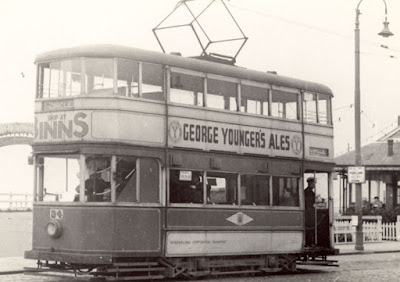 Unusually (and sensibly) Sunderland's trams had pantographs, not trolley poles like most other systems. So the conductor did not have to turn the pole around for the return trip by hanging on to a long rope! 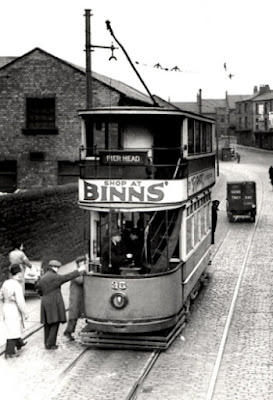 That's how it was done in South Shields, just up the road from Sunderland. But look at this picture of the Sunderland tram at the Seaburn terminus. 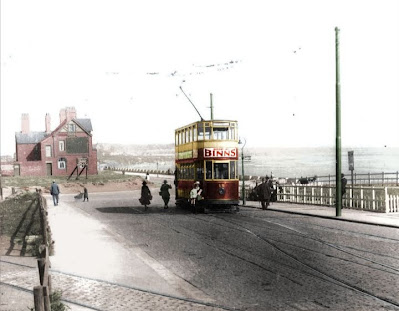 There is the old cafe, bottom left the track that forms the turning circle veers off, but the tram has a trolley pole. Not only that, but look in the air above the pole. Very faintly we have a trolley pole reverser. Here is a reverser reversing at Crich Tramway Village.Clever, innit?
But why have a reverser AND a turning circle? Maybe an expert in the history of Sunderland trams can supply the answer.
And Another!
Livery experiments are nothing new. Even before the Bearded Bus Beautifier from the Bush, operators were wont to experiment, usually unsuccessfully and with vehement antagonism from their citizens, voters and passengers. Such was the response to Sunderland's ... 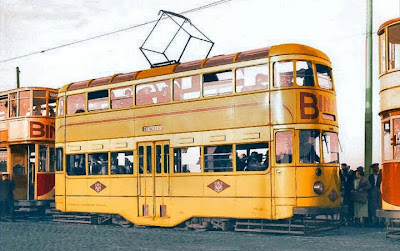 ... yellow and cream livery delivery, seen above at Seaburn awaiting the crowds. It quickly reverted to read and cream.
And Another! 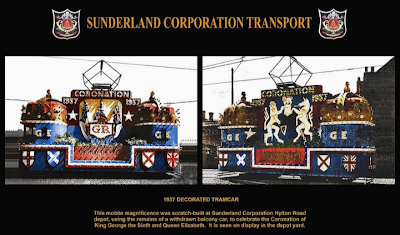 The celebration was for the Coronation of King George VI in 1937.
Reading Lights Up 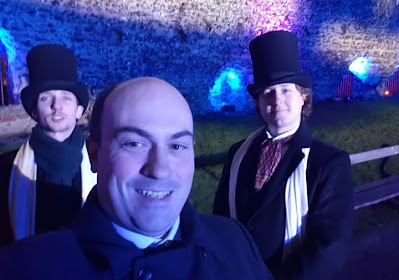 Robert Andrew, boss of Reading Buses, is seen here during a meeting with Mr Huntley and Mr Palmer, one time biscuit supremos on Reading.
Huntley & Palmers is a British company of biscuit makers originally based in Reading, Berkshire. Formed by Joseph Huntley in 1822, the company became one of the world's first global brands (chiefly led by George Palmer who joined in 1841) and ran what was once the world’s largest biscuit factory. The biscuits were sold in elaborately decorated biscuit tins. In 1900 the company's products were sold in 172 countries, and their global reach saw their advertising posters feature scenes from around the world.

Part of the town's seasonal decorations involves a celebration of the "Biscuit Town". 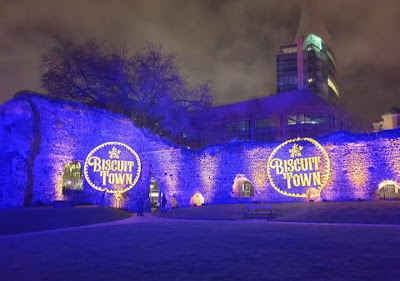 Much of the factory is gone, but memories remain. 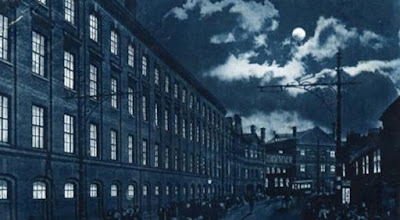 Many of the tins are VERY collectable! 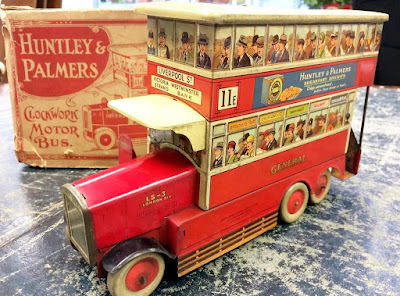 The Ballad Of Barley Road 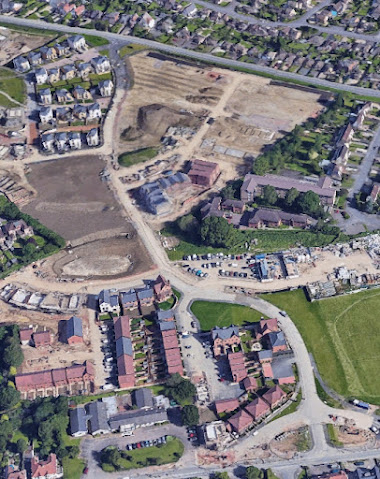 Barley Road is a new-build in Cheltenham. It links New Barn Lane (top) with Prestbury Road (bottom) to the west of Cheltenham Centre.
On New Barn Lane you will find service N, every 30 minutes ... 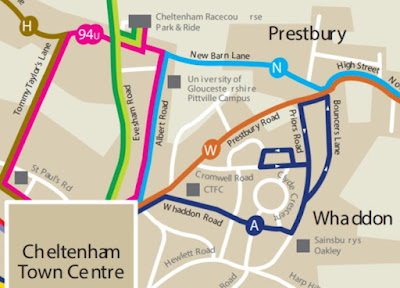 And in the middle of Barley Road ... 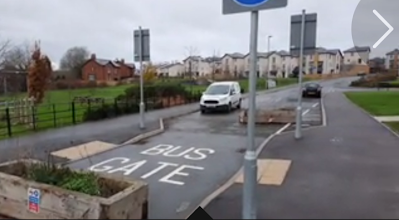 ... is a splendid "Bus Gate". This is to allow buses to pass but (in theory) to prevent private cars from using the link as some kind of "rat run". Very nice.
Except that Stagecoach, operators of the N and the W have no desire or plans to operate via Barley Road as such a diversion would impede the viability (time-wise) of either the N or the W or both. Gloucestershire Council (who installed the bus gate at significant expense) have not suggested any way of providing a bus service.
Happy memories of Rowan and Martin's Laugh-in!
Next Faded Ferry blog : Tuesday 14th December
-o-o-o-o-o-o-o-o-o-o-o-o-o-o-o-o-o-o- 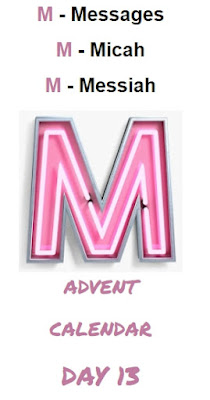 Even non Bible experts should be able to pick up THE MESSAGE of Scripture. It was repeated time and time again and proved to be the right message for God's people. Here it is, as stated in the earliest Bible accounts.

I have now given you a choice between a blessing and a curse. When all these things have happened to you, and you are living among the nations where the Lord your God has scattered you, you will remember the choice I gave you. If you and your descendants will turn back to the Lord and with all your heart obey his commands that I am giving you today, even if you are scattered to the farthest corners of the earth, the Lord your God will gather you together and bring you back,

But bring back how? Politically, with military might, with economic prowess, led by a new prophet, or a new priest or a new king? Or by all three?
The word used to explain this possible leader was MESSIAH.
Well then, the Lord himself will give you a sign: a virgin who is pregnant will have a son and will name him ‘Immanuel.
A child is born to us!
A son is given to us!
And he will be our ruler.
He will be called, “Wonderful Counselor,”
“Mighty God,” “Eternal Father,”
“Prince of Peace.”
His royal power will continue to grow;
his kingdom will always be at peace.
He will rule as King David's successor.
The Lord says, “Bethlehem Ephrathah, you are one of the smallest towns in Judah, but out of you I will bring a ruler for Israel, whose family line goes back to ancient times.”

The top two prophecies are from Isaiah, the third extract is from MICAH.

Over several hundred years these Godly "prophets" kept adding little pieces to the Jigsaw, slowly building up the picture of how God would offer to bring people back to Him. 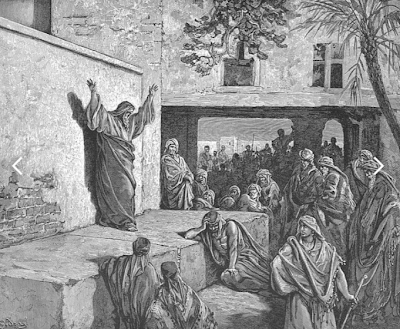 Each individual prophecy would not be convincing on its own, but, put together, the picture emerged of God's Saviour, the MESSIAH.