The Best Rail Map Ever? 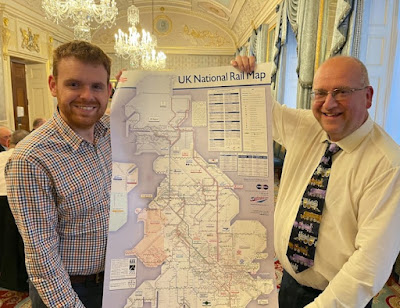 Roger French blogs enthusiastically about this product which is in the hands of Alex Nelson of Chester-le-Street booking office (privately run) and www.nationalrail.com ticket sales site.

It was designed by a keen 15 year old, Luke Gardner, who used what was then his fairly primitive home computer using the basic ‘Windows Paint’ software to put the first map together. It’s had a number of tweaks since then and is now produced by graphic designers working for Alex but the original design devised by Luke (who now works as a timetable planner for TransPennine Express) is still followed, not least the 45 degree and 90 degree layout depiction for the railway lines which would surely have impressed Harry Beck, the all time master of diagrammatic map designers. 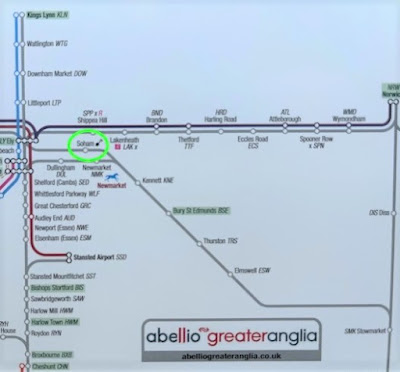 The detail is impressive, including even the new stop at Soham, due to open soon (next week?).

The big problem with this big map is that it is a business-led product and will cost you £11 - not too bad - but with a whopping £8 post and packing.

Whereas the other best rail map ever, that from Barry Doe, is available as a free download. 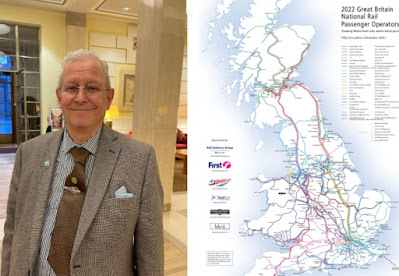 Barry's doesn't have the completeness of station detail; but it serves a different purpose, being a map of rail operators first and foremost.

Thankfully, Rog does acknowledge Bazza's excellence in the same blog! Both have their benefits but the Doe product is geographical (which helps) as well as being free. Printed copies are available, see Barry's web site for details.

The Worst Bus Map Ever! 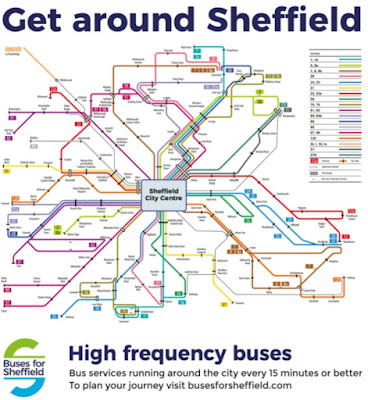 Readers may remember fbb's review of the above farcically bad map produced by SYPTE to encourage bus travel in Sheffield. Needless to say, as is the way with badly managed web sites, it still sits on the PTE web site under the headline of "Buses for Sheffield".

Not only is it misleading and wrong in many places, but it is now at least two sets of changes out of date. 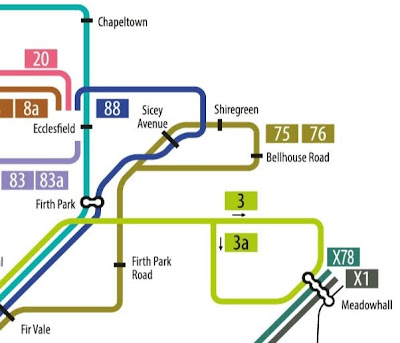 The 3/3a is now the 95/95a; the X1 has been joined by an X10. Outstanding bludners include the 88 and the 1 (MID BLUE), neither of which serves Ecclesfield and the 75/76 which is one of the major services to First Park which it aciduously avoids on the map. 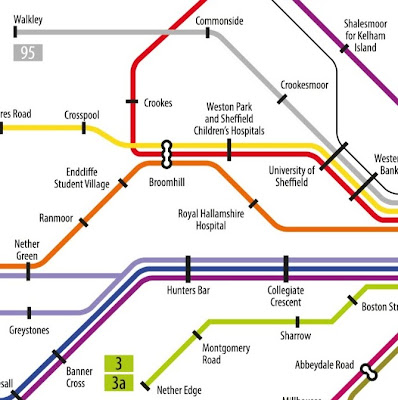 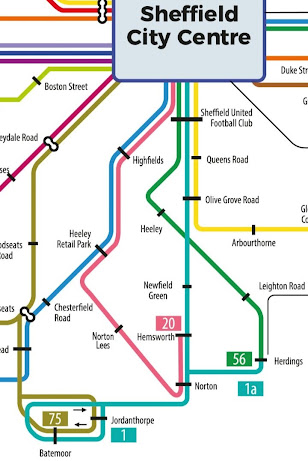 The 56 (DARK GREEN) is now the new 1a, having been, most recently, the 11a; and the 1a shown above no longer exists. There is no such place in Sheffield as Highfields - it is singular and always has been.

fbb did offer to GIVE his correct and accurate version of the above map to the PTE for absolutely no pennies. The offer was declined as the boys and girls in the ivory tower were "very pleased" with their truly awful map. 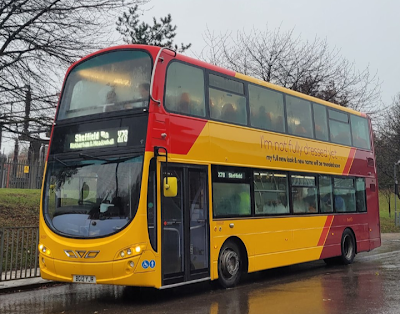 It isn't BLUE for Sheffield or RED for Doncaster but gives no clues at all as to it's real purpose. 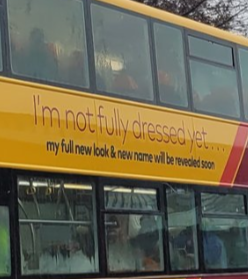 The inside is up-fettled as well ... 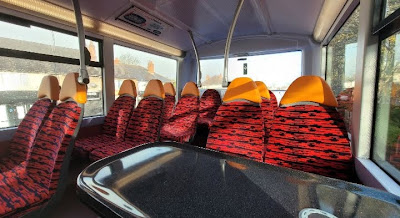 ... and top deck tables come to Sheffield for the first time ever!

Another From Sunderl And District 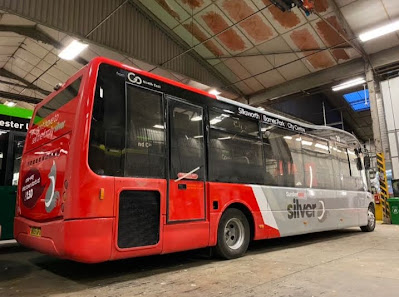 This one is branded "Silver" for service 33 to Silksworth. 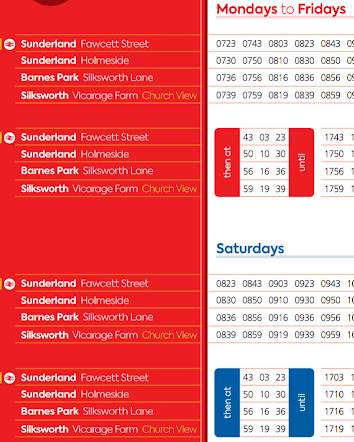 A simplified route diagram is displayed on the cove panels ... 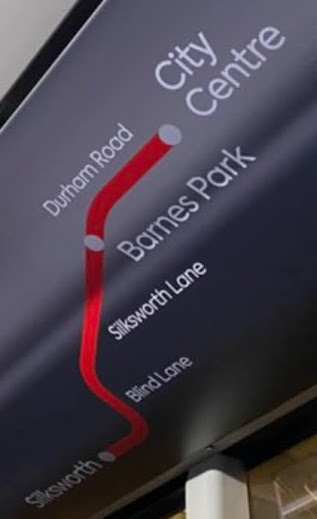 ... although by the time you are on the bus and haver paid your fare, one would hope that you know where you are going! But is it just "Silver" ... 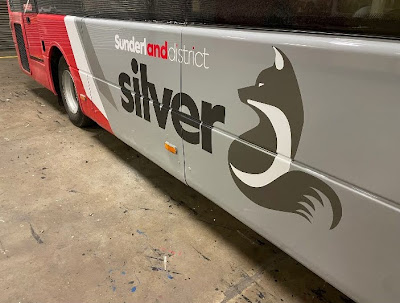 ... and the pub in Stocksbridge, Sheffield is so named after the town's former Steel Magnate. 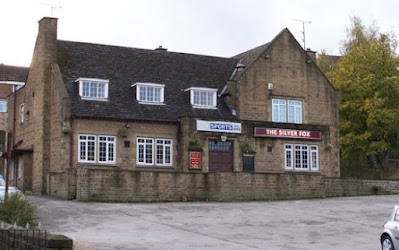 Alas, the pub has recently been put up for sale and the Steelworks is almost completely gone. This advert is from 1966. 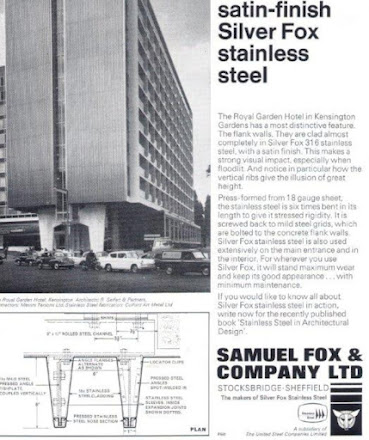 A Delivery to fbb Mansions 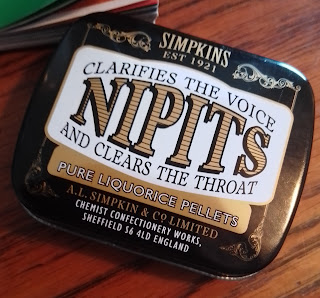 fbb did not buy the wagon from Rails of Sheffield - too pricey. The wagon ... 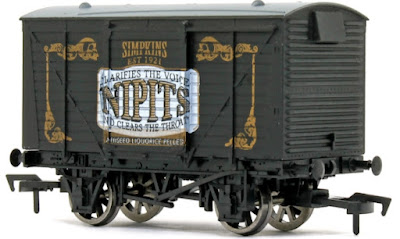 ... has disappeared from the Rails web site, so presumably sold out already.
And, talking of Rails of Sheffield ...
fbb gets very puce and blotchy with programmes like that from Hornby, now nearing iys 10 week run on the Yesterday channel. Yet again last week the script and the presenters kept using the word "train" when they meant "locomotive"! It is true that a light engine movement on the real railway becomes a "train" but one standing on a display shelf is NOT a train.
... but Rails have gone one better (or worse!). 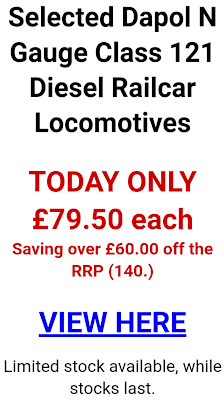 Maybe Denise, who ackles the web site, doesn't understand either! 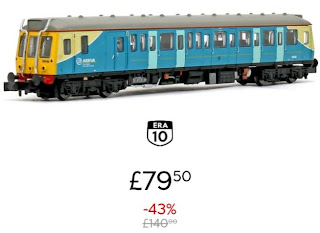 But, this time, it isn't a locomotive.
Leeds £2 Flat Fare 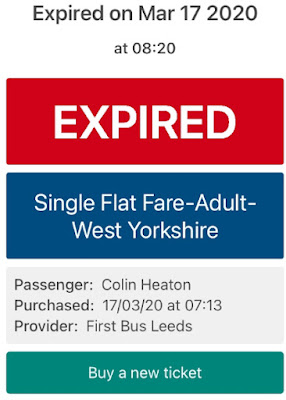 It might be flatter than fbb thought! Apparently the above screen on the user's phone tells that the ticket has expired because it has not been validated on the bus - yet.
It doesn't mean that the journey cannot be more than 15 minutes long. Bearing in mind Colin (fbb's original correspondent on the matter) lives in Leeds and uses the First Bus fare, flat or otherwise, you might think it would be a bit clearer.
Colin writes apologetically:- 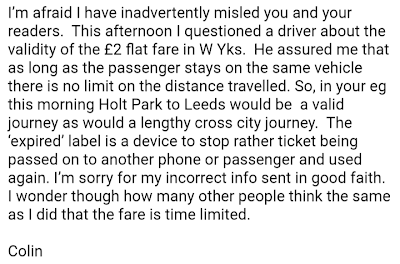 Thanks Colin for clearing that up. It doesn't alter the fact that all this clutter is not conducive to the easy use of the bus. If you have a car, you get in and go. Apparently, to traverl by bus, you need to spend several hours working out the best deal.
Flat fare of £2 Huddersfield to Manchester? You do stay on the same bus!
The next question. If your ticket expired because you have failed to poke your device (very nasty, missus) at the ticket machine in time, have you lost the £2? 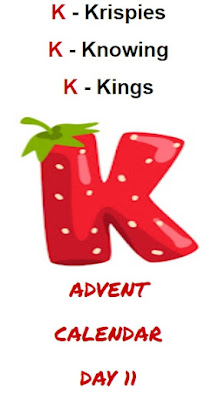 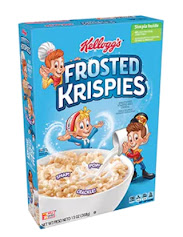 A collection of briefly blogged snippets is hardly the place to give even an expurgated overview of the history of the Israelites once thay had occupied the Promised Lane. After Joshua shuffled off to meet his maker and inspirer, the country was ruled by "Judges", tribal heroes who were raised up (by God, of course!) to get the people back on track.
They did, but the people soon wandered off piste and another "judge" was needed. The last of the "judges" was Samuel - not to be confused with Samson of Delilah and hair-cut fame! 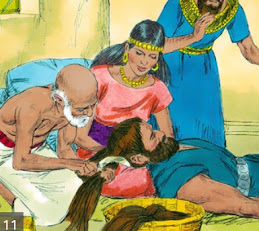 There was a demo - a march - a protest. The people shouted "WE WANNA KING". They argued  that all the other nations round about had kings so they wanted to be the same.
Sam warned them, "A king will take your women and wives, your men as soldiers and you property for himself; GOD IS YOUR KING and he is utterly reliable". Like many before and many after, Samuel reminded the people of God's goodness in the past.
"You KNOW that God is best!"
"Remember how he cared for you in the desert, supplying food in the form of Manna" ...
The Lord said to Moses, “Now I am going to cause food to rain down from the sky for all of you. The people must go out every day and gather enough for that day." The people of Israel called the food manna. It was like a small white seed, and tasted like thin cakes made with honey. 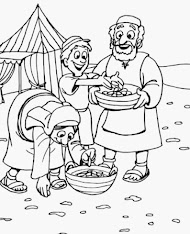 ... Divine Honey Krispies!!!
Following the age-old pattern, the King thing did not work out and after a few generations of mostly effective Royal Reign everything went belly-up again. The Kingdom split in two and the constituent parts became too weak to resist enemy attack.
Things were going from bad to worse! All because the people turned away from God.
Maybe there is a lesson for 2021 and 2022?
-o-o-o-o-o-o-o-o-o-o-o-o-o-o-o-o-o-
Posted by fatbusbloke at 02:00