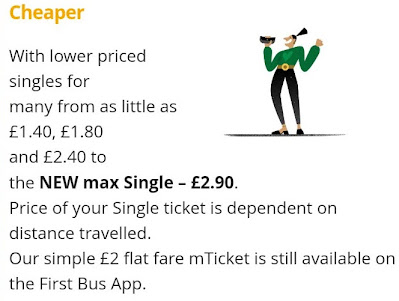 Ah, yes, the simpler flat fare of £2. Only it isn't simple and it isn't flat. fbb is indebted to West Yorks resident Colin for clearing things up a bit.

First the £2 IS zonal - the fare is available in all four area, Leeds, Bradford, Halifax and Huddersfield ... 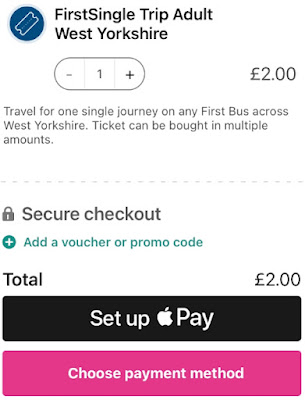 ... although your phone implies universal validity!

But with a big, big snag! Colin explains.

I’m a user of First’s £2 flat fare ticket (First Single trip ticket. It’s useful for journeys before 0830 Monday to Friday as it’s cheaper than the standard fare to Leeds. What it doesn’t say in the publicity is that after validation it is only valid for a 15 minute journey but it says that on your phone before you scan on boarding. The ticket then has an expiry time counting down. My journey takes about 15 minutes but I imagine some passengers might just use it for a longer journey. It’s many years since I saw anyone on a bus, except the driver, checking tickets.

So the £2 Flat Fare would not be valid for a journey from Holt Park into Leeds ...

... so not very flat at all! Of course, if it is not policed by the Blakeys of this world, who cares?

ToTo Tells the Truth (Or Does It?) 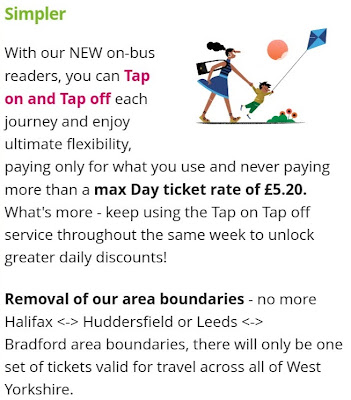 After several screens of ticketing diahorrea we come to the nub of the matter.  ToTo means "Tap On : Tap Off" and it is valid for certain classes of tickets only.
You tap your bit of electronic wonder on the ticket machine reader as you get on; then you tap on a different bit if electronic wizardry as you get off. And if both fail to work properly you hold up all those passengers who have stupidly opted to pay using money while the driver attempts to sort it out.
It's a good system!
But we are told that fares on ToTo are "capped" - i.e. you will never pay more than the day ticket or weekly ticket, however much you travel. 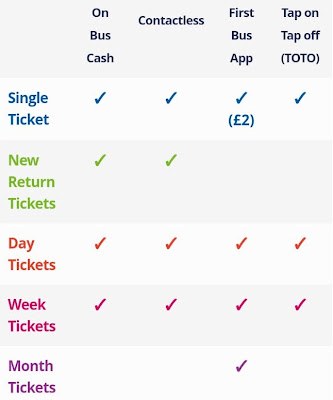 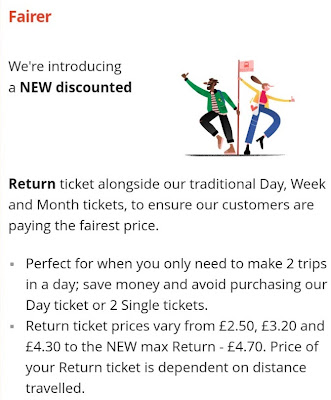 But we are told a bit more about other fares - most of which are NOT available on ToTo! 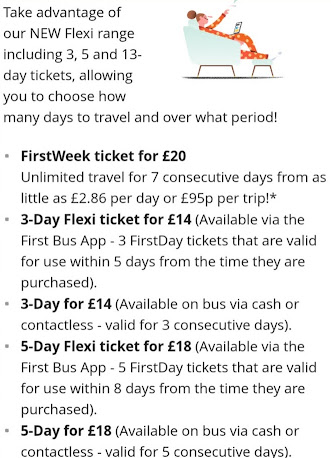 Of course, if your daily return ticket is priced at £2.50 a £20 weekly is poor value unless you travel more than a return trip on each of the seven days.
The 3 day ticket is pretty much useless as it offers three return trips at £4.66 each! The 5 day works out at £3.60.
The moral is DONT BUY ONE OF THESE "DEALS" UNLESS YOU ARE SURE YOU WILL GAIN BY IT!

Whilst there is the hope of cheap fares for "many" passengers, suspicious users will think that this scheme has been designed to INCREASE FARES; and without much subtlety either. Even the "official" First Bus "FAQs" seem to recognise the hidden increases. 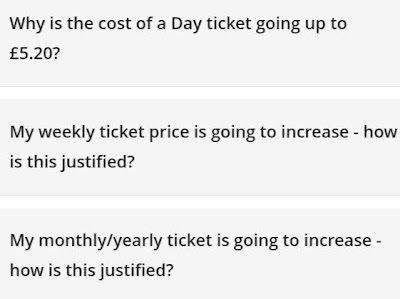 Some comments that accompany these details on other web sites are pertinent.

First's pathetic answer to FAQs such as this is to remind the agrieved passenger that they can now travel much further, across area boundaries, with these new fares. It's a bit like telling a customer in the chippy that the price of cod has increased from £7 to £10 but you do get a slightly bigger portion!

This is why I detest people who have a job in marketing, the slimy way they dress up price increases is disgusting. Can't they just admit the company aren't making enough money so that's why fares are going up rather than dressing it up as something fair to all passengers? This will only lead to people travelling less! In effect, they are saying fares must increase for many to subsidise others! Hell fire, how can they say it's fair that a dayrider price must go up for Leeds residents just to make it fair for those who travel longer distances such as Cottingley to Halifax for example? They may say cheaper returns are available, but many residents catch 4 buses per day, we don't all work in the city centre!

Another on-line writer suggests that First should introducer a simpler, fairer pricing regime!
What's simple about these changes?
Far too many ticket options. Far too complicated. Something like this would be easier.
2 single prices - £1.50 or £2 (flat fare)
1 day ticket price - £4.50
3 day £12
5 day £15.50
7 day £19
No preference to how you pay, app, card or cash.
Sounds fine if First Bus don't want to make a profit. Bummer! It's the commercial system again and under that system the passenger has to pay to keep the business viable.
But one thing is clear. The new West Yorkshire fares system IS A MESS!
The Wicked Witch of the West Yorkshire is very much at work. 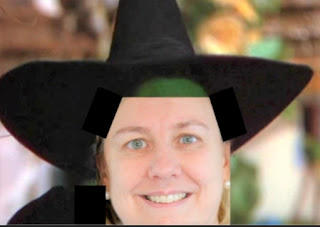 Maybe First West Yorkshire's ToTo needs one visit to the the great terminus in the sky that can be supplied by the vet?
Next Variety blog : Saturday 11th December 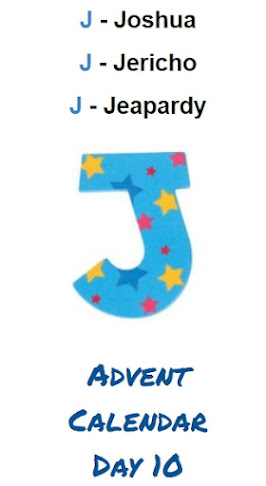 It Was All Going Jolly Well
Biblical History carries on with its ups and downs. After 40 years of wanderings, the Israelites are about to occupy the land that God has promised them. This rag bag of tribes is to become a nation. Joshua took over from Moses and had the dubious job of "entering" the promised land. But the people living there were, understandably, less than keen to be occupied.
And the Canaanites had Jericho! 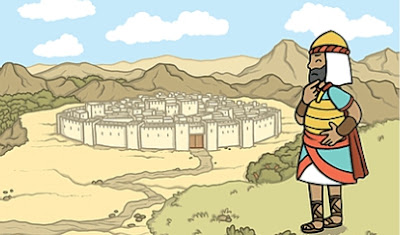 Modern thinking struggles with some of this harsh history, but whatever modern man may think, the Bible writers were utterly convinced that this was God's will for his chosen people. And, anyway, that was the way things were done back then.
God said, “My servant Moses is dead. Get ready now, you and all the people of Israel, and cross the Jordan River into the land that I am giving them
Be sure that the book of the Law is always read in your worship. Study it day and night, and make sure that you obey everything written in it. Then you will be prosperous and successful. Remember that I have commanded you to be determined and confident! Do not be afraid or discouraged, for I, the Lord your God, am with you wherever you go.”
It was the same pattern as ever; do it God's Way and it will work out. Ignore God and things will mess up!
So, (on the seventh day after marching round the walls seven times) the priests blew the trumpets. As soon as the people heard it, they gave a loud shout, and the walls collapsed. Then all the army went straight up the hill into the city and captured it.
Easy peasy! And they all lived happily ever after.
Only they didn't always obey and they didn't always live happily - they were always in Jeapardy.
-o-o-o-o-o-o-o-o-o-o-o-o-o-o-o-
Tailpiece
A few week back fbb was bemoaning the escalating price of model locomotives.
This one is OO scale
Fitted with DCC electronic control
And a sound chip 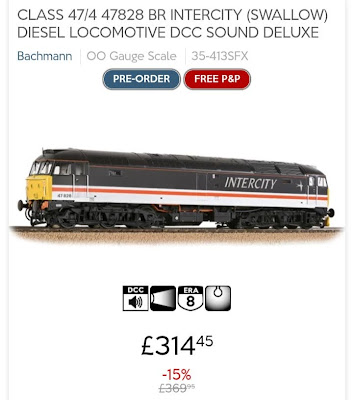 It has a retail price ot £370. Rails of Sheffield is offering it at a discount of ONLY (ONLY? yes, ONLY!?) £314.45 AND with free postage and packing.
It is still OUCH!!
fbb is thinking of taking up pressing country flowers. 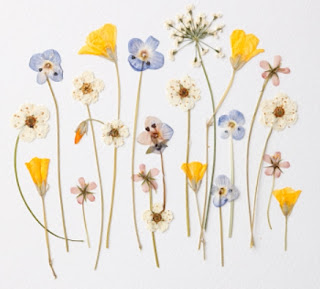 At least the raw materials are free!!
Posted by fatbusbloke at 02:00