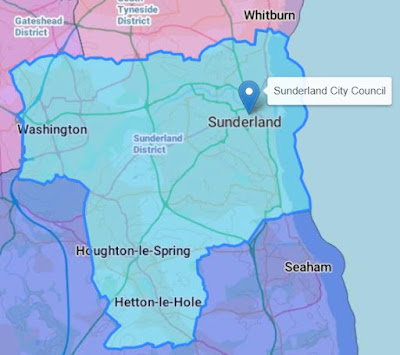 The modern city of Sunderland is big and includes quite a lot of bits that were in County Durham, But way back when, Sunderland was tiny! 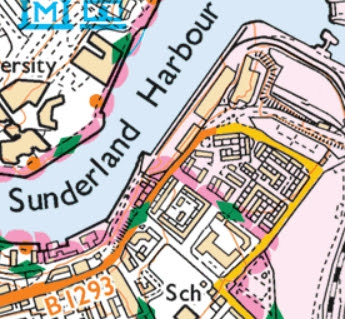 It was a small settlement on the mouth of the Wear supporting some early docks and ship building sites.
Further inland was Bishopwearmouth. 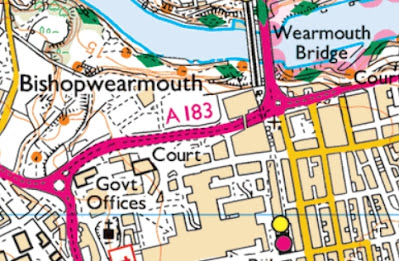 This community, originally owned/controlled by the Prince Bishops of Durham, (there's a clue in the name) was centred round the church shown lower left on the above map extract; more correctly round the site of an ancient church much rebuilt in the 1930s. 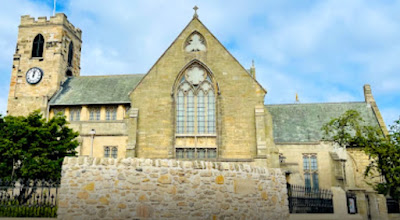 A church dedicated to St Michael & All Angels has stood on this site for over a thousand years. For most of that time, it has been known as ‘Bishopwearmouth Parish Church’. The parish of Bishopwearmouth, south of the River Wear was founded in around 940AD, with an original stone church being built shortly afterwards.
In 1998, following the grant of City status, the church was redesignated as ‘Sunderland Minster’.
North of the River Wear was Monkwearmouth, under the control of the monks (there we go again!) of Jarrow Abbey. 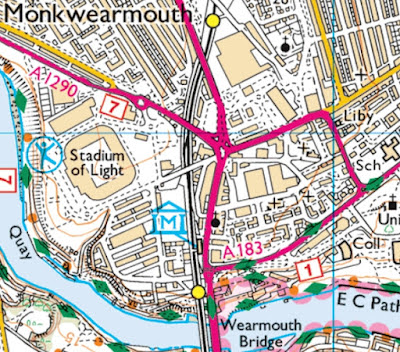 In this case, the key ecclesiastical edifice (above map, centre on the right edge) is St Peters Church. 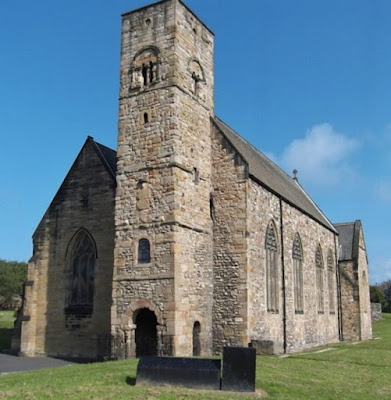 St Peter's Chuch is the parish church of Monkwearmouth in Sunderland, Tyne and Wear, England. It is one of three churches in the original Parish. The others are All Saints' Church, Monkwearmouth and St Andrew's Church, Roker.
St Peter's was founded in AD 674–5 as one of the two churches of the Benedictine double monastery of Monkwearmouth–Jarrow Abbey. The other church is St Paul's Church, Jarrow. St Peter's is a Grade I listed building and part of a scheduled monument.
Back on the south bank of the Wear, a main road ran from the church at Bishopwearmouth parallel to the river along to the smaller settlement of Sunderland. It is imaginatively called High Street West ... 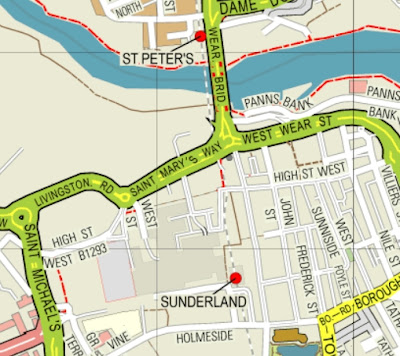 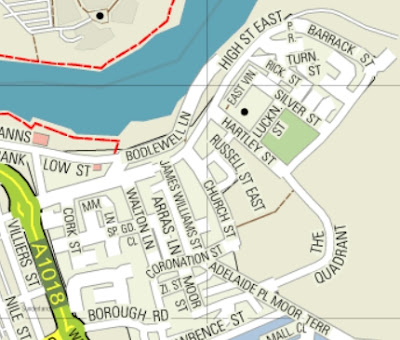 Much of the original commercial High Street East was demolished ... 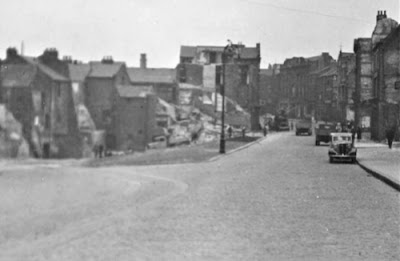 ... whilst Low Street and Boddlewell Lane were full of quayside warehouses. 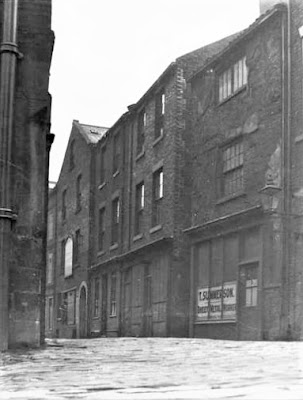 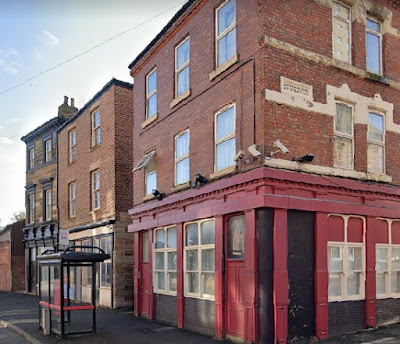 ... but is now mostly new residential. 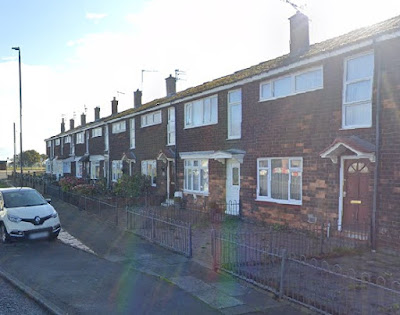 Boddlewell Lane, which led down to the Sunderland Ferry, is now named Low Road all the way and, apart from a few old warehouse buildings is purely residential. 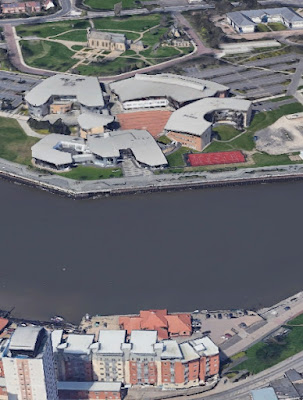 So the Sunderland (or High) Ferry ran from Boddiewell Lane (near today's tower blocks) across to where the University of Sunderland is built now. St Peters Church sits prettily in a green space (picture above, top).
The ferry is very ancient, and shown on this old 1700s map as a rowing boat. 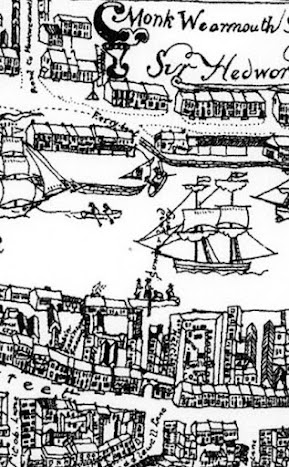 High Street East is the road crossing at the bottom of the picture. The fare was one halfpenny ...

... with access down some steep steps via what can best be described as a low grade alley.
Access wasn't much more luxurious when the steam ferries arrived ... 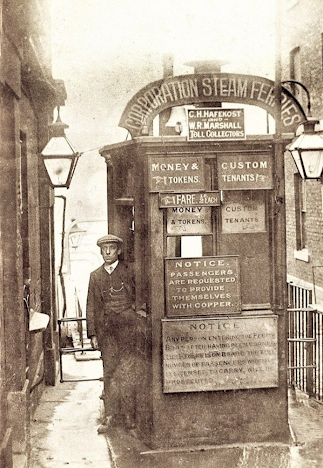 It was still a long way round, a long haul up and and long trek down via the Wearmouth Bridge! So the ferry kept running. But still one half penny.
In latter years you did get a concrete bus shelter. 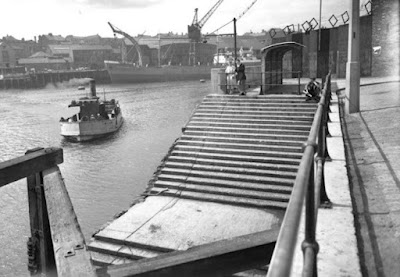 H noere they all are, as familiar as anything. 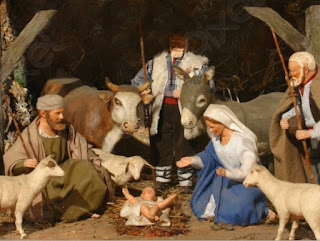 The shepherds with their sheep are dutifully arrayed outside a stable/cattle shed with donkey and a cow about to low!  Here's what Luke's gospel says.
When the angels went away from them back into heaven, the shepherds said to one another, “Let's go to Bethlehem and see this thing that has happened, which the Lord has told us.”
So they hurried off and found Mary and Joseph and saw the baby lying in the manger. When the shepherds saw him, they told them what the angel had said about the child. All who heard it were amazed at what the shepherds said.
It is assumed that they left their OVINE charges safely tucked up on the Shepherds Field. Sheep are not easy to control, especially if they have been woken from a nap!
So delete the OFFERING of a gift of a lamb, the cow (lowing) and donkey (donking?)!
But modern readers can be bothered about angels - and there were a lot of them about here, an OUTBURST of angelic hosting!.
An angel of the Lord appeared to them, and the glory of the Lord shone over them. They were terribly afraid, 10 but the angel said to them, “Don't be afraid! Suddenly a great army of heaven's angels appeared with the angel, singing praises to God:
We cannot ever know what exactly happened. Was it like this ... 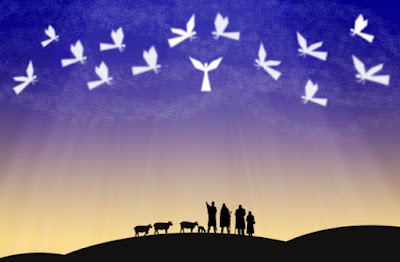 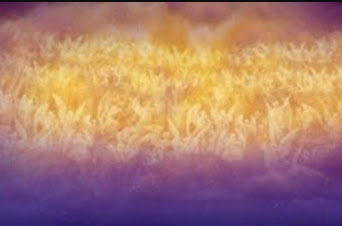 First century shepherds were the zero hours contract employees of their day - and this was the night shift. These hard-nosed blokes were very afraid! What's more, the tough guys were willing to face ridicule when they told others about their experience.
What we can say is that Luke (and others around at the time) were very satisfied that the eternal and almighty God made himself evident up on the field ... 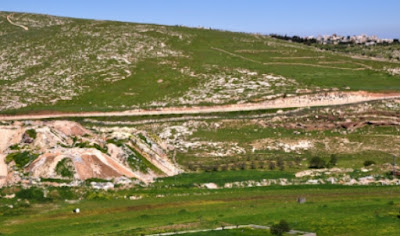