To Consett By Train 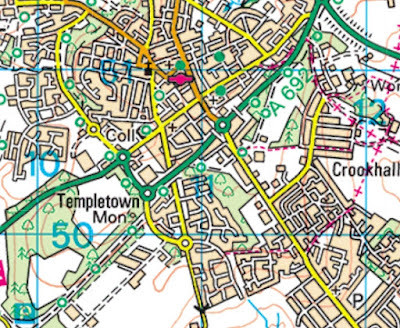 Consett closed to passengers in 1955, so you would be right in thinking there won't be much left! Can you sport the station and trackbed from the above. It is probably impossible unless you know. That straight green road is a clue; it follows the trackbed as an inner bypass (GREEN) for the A692 taking traffic away from the main drag (YELLOW) through the town centre. 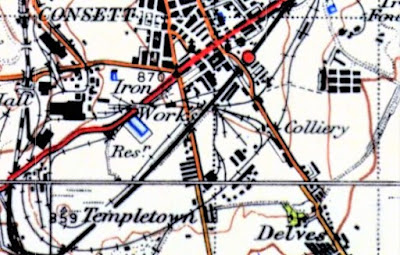 We need to zoom in a tad to enlarge the area round the little red dot. 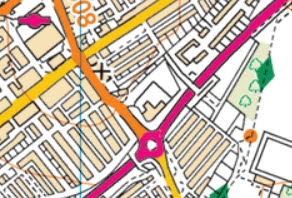 Where once the ORANGE road crossed the railway, there is a roundabout. But travel back in a north easterly direction along the RED road and you will see a white footbridge. This links Wear Street ... 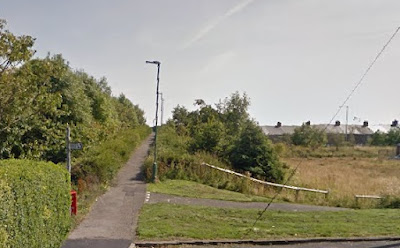 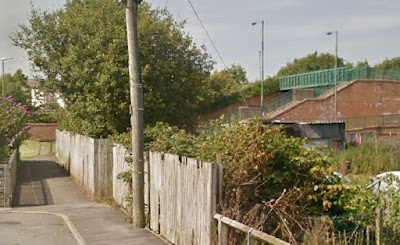 This route was the main access to the station's one island platform. Most pictures of the station have been taken from that footbridge ... 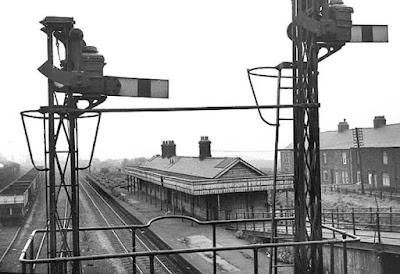 ... so pictures OF the footbridge are rare. Below is a shot taken after closure when all was ruinous. A ramp led down from footway to the platform. 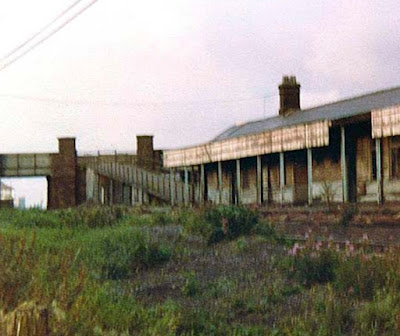 So this view of the A692 is taken from where the platform once stood ... 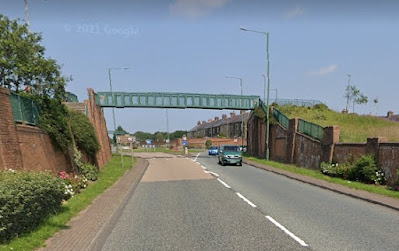 ... with the modern footbridge in view. This terrace ... 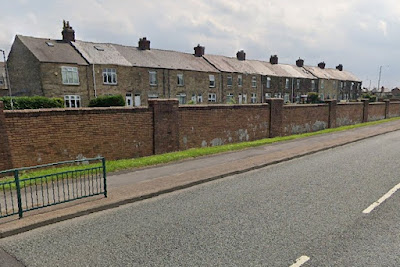 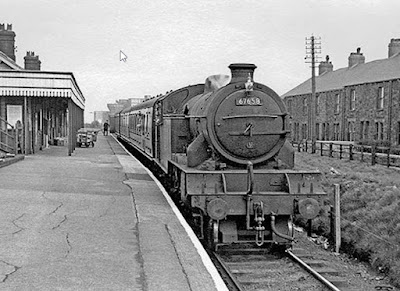 ,
Trains never seemed very successful at Consett with this sparse service existing in the years just before closure. 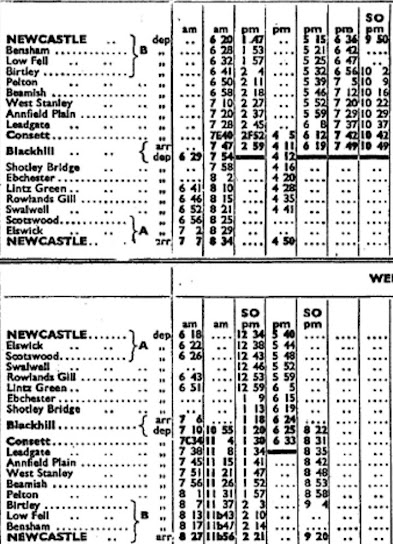 It may be possible for our loyal readers to follow the two routes from Newcastle with some trains running as "circulars". 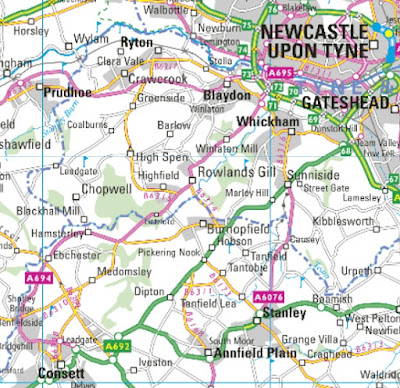 The route in the Consett area is easier to understand ... 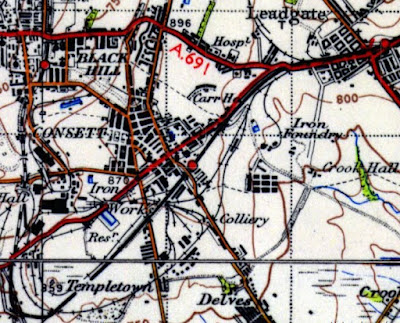 ... via Leadgate or Blackhill (Black Hill).
Articles on-line suggest that the railways suffered because of the plentiful bus service. Ironically, the Northern General bus route map is the best source of the rail map showing the circular route via Consett. (click on the map for an enlargement). 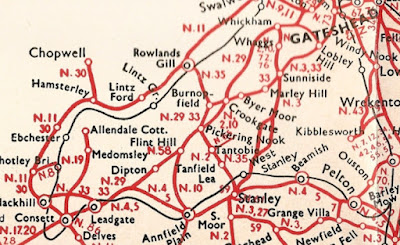 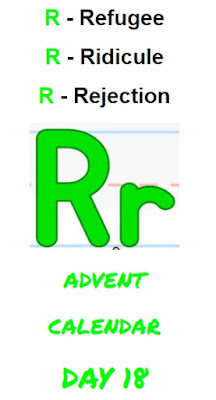 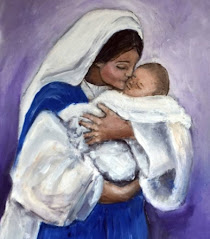 Of course, he was only a baby at Christmas! But we should have known. The prophet Isaiah told us.
We despised him and rejected him;
he endured suffering and pain.
No one would even look at him—
we ignored him as if he were nothing.
But he endured the suffering that should have been ours,
the pain that we should have borne.
All the while we thought that his suffering
was punishment sent by God.
At the end of time, billions of people were standing on a great plain before God's throne. Most shrank back from the brilliant light before them. But some groups near the front talked heatedly, not cringing with cringing shame - but with belligerence.

"Can God judge us? How can He know about suffering?", snapped a pert young brunette. She ripped open a sleeve to reveal a tattooed number from a Nazi concentration camp. "We endured terror ... beatings ... torture ... death!"
In another group a young black man lowered his collar. "What about this?" he demanded, showing an ugly rope burn. "Lynched, for no crime but being black !"
In another crowd there was a pregnant schoolgirl with sullen eyes: "Why should I suffer?" she murmured. "It wasn't my fault." Many groups had a complaint against God for the evil and suffering He had permitted in His world.
So each of these groups sent forth their leader, chosen because he had suffered the most. A Jew, a black man, a person from Hiroshima, and others like them. At last they were ready to present their case. It was rather clever.
Before God could be qualified to be their judge, He must endure what they had endured. Their decision was that God should be sentenced to live on earth as a man.
Let him be born a Jew. Let the legitimacy of his birth be doubted. Give him a work so difficult that even his family will think him out of his mind.
Let him be betrayed by his closest friends. Let him face false charges, be tried by a prejudiced jury and convicted by a cowardly judge. Let him be tortured.
At the last, let him see what it means to be terribly alone. Then let him die so there can be no doubt he died.
When the last had finished pronouncing sentence, there was a long silence. No one uttered a word. No one moved.
For suddenly, all knew that God had already served His sentence.
But nothing of this was known yet. He was just a lovely little baby. 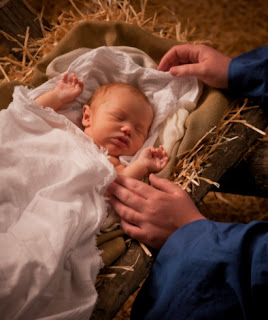 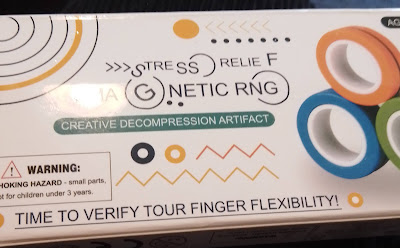 For tour Christmas pleasure - up to fbb's standard!
And the Christmas Lunch at Steyning Grammar School. 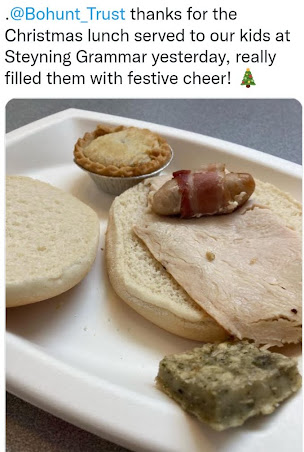 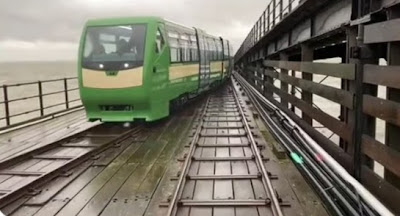 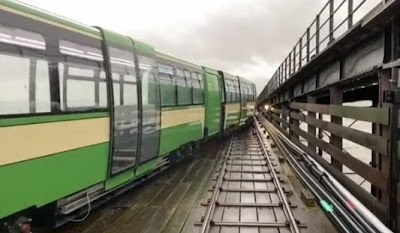