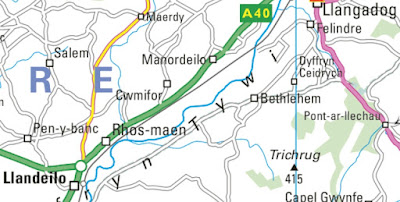 Between Llandeilo and Llangadog runs the Towy Valley a k a Dyffryn Tywi, the A40 (GREEN), an unclassified road via Bethlehem (YELLOW on larger scale maps), the Heart of Wales railway (thin BLACK line) and, of course, the River (BLUE).
fbb wondered whether there were any roads or tracks which linked Manordeilo with Bethlehem. But none seemed obvious. But turn up the scale and a possibility emerges, but at 1 inch to the mile (or whatever that is in the new money) there was nothing obvious. 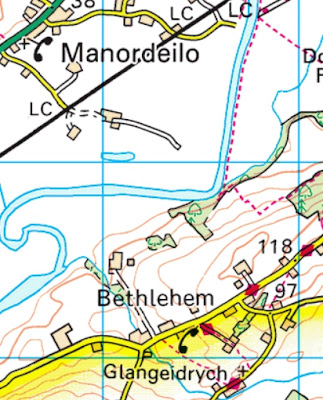 The river always gets in the way!
Maybe turn it up one more notch - and wowsers!

So those green dashes appear to run across the railway? There used to be a ford by the looks of the tracks which end on the riverside, opposite each other. 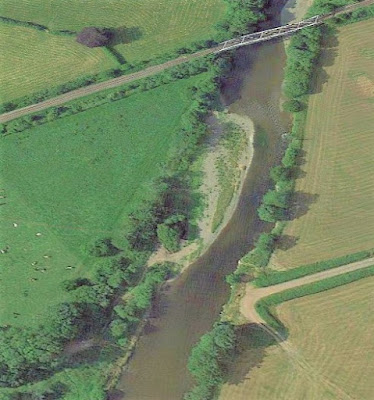 So Mary and Joe could get off the bus in Manordeilo but it would not be recommended in winter, late in the day when it is becoming dark! 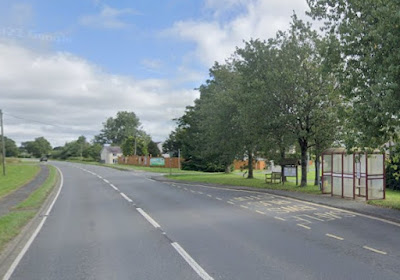 Then we could  take a wander down the road to the right, unsuitable for heavy vehicles. 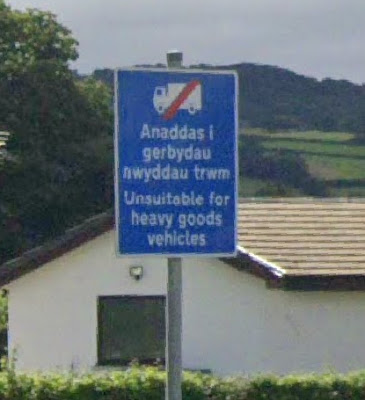 There are a few properties along the way ... 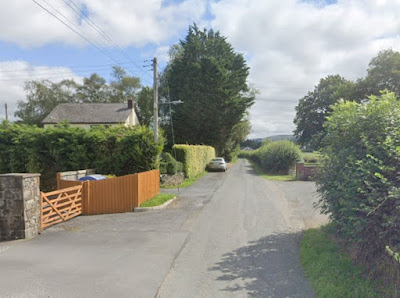 ... but, in typical Welsh fashion, the way becomes narrow! 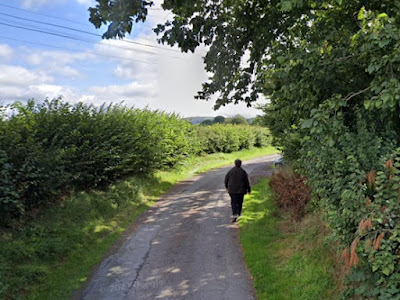 Then comes the railway ... 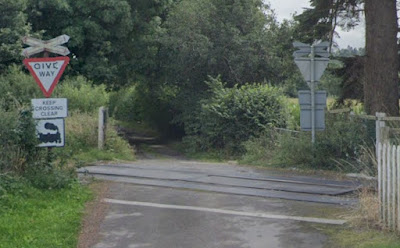 ... and, astoundingly, a station as was. 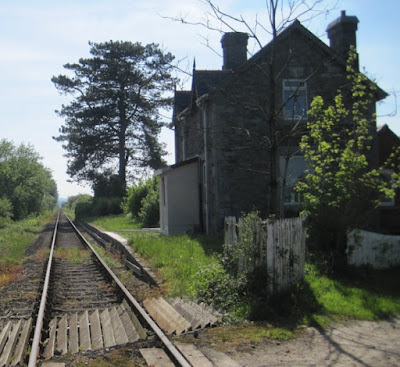 It even has a tiny platform.
Opened in 1858 on the Vale of Towy Railway's line from Llandeilo to Llandovery, later part of the Central Wales Line, this station closed in 1955. It was known as Glan Rhyd in the handbook of stations. It closed on 20 July 1931 but reopened as Glanrhyd Halt on 19 December 1938. It always remained open for milk traffic! In some timetables it was shown as "Glan Rhyd".
And there, on an old map, is the station, the level crossing and, at the river, the ford as guessed by fbb.

Certainly Mary and Joe would not be advised to wade across a ford to get to Bethlehem. But IF the path does cross the railway bridge ... ?
On 19 October 1987, a train on the Heart of Wales line derailed and fell into the River Towy due to the partial collapse of the Glanrhyd Bridge near Llandeilo, Carmarthenshire. Four people died as a result of the tragedy; the driver and three of the passengers drowned. 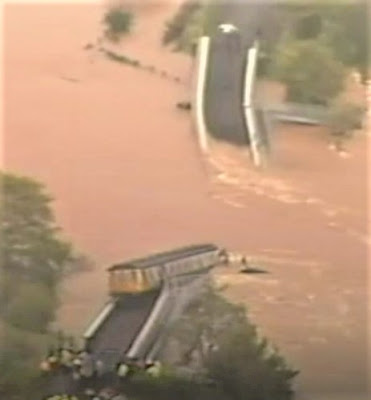 fbb does no usually refer to accidents, especially if they involve tragic loss of life; but in this case it gives us some pictures of the bridge. And those pictures do show the remains of the footpath that was provided as a replacement for the ford. 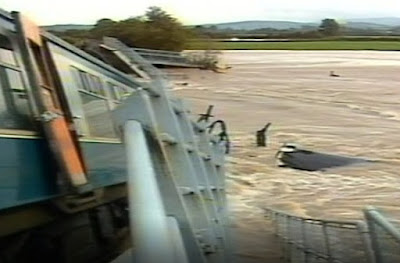 But the bridge was rebuilt after the diaster, giving the railway and local authorities every opportunity to dispense with the walkway. 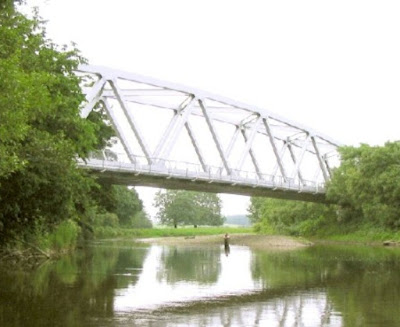 But the signs are still there ... 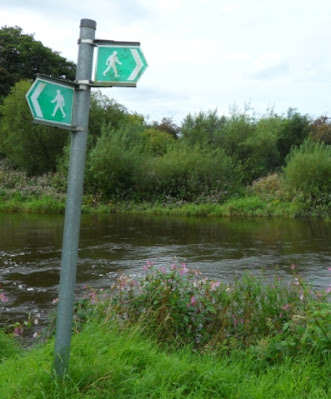 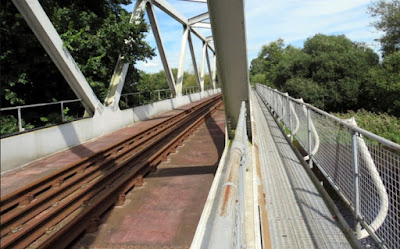 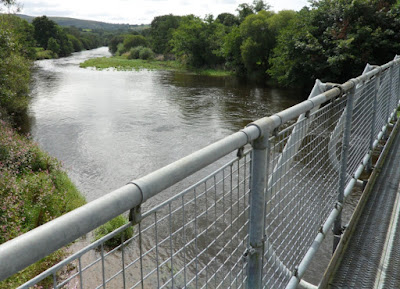 ... fine views of the river.
From the far side, there are two walking routes. 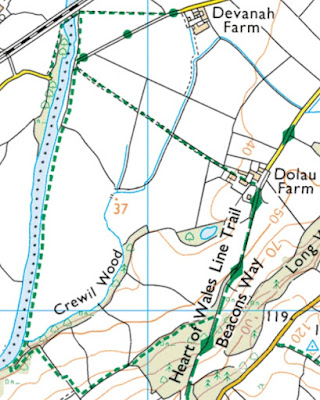 One follows a farm track and part of the Heart of Wales Line trail (a k a Beacons Way) whilst the other runs mostly along the river bank then wiggles back to join the main route. You would appear on the Bethlehem Road here ... 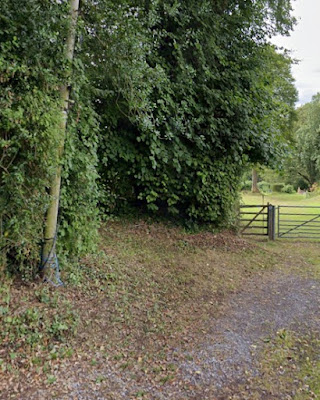 ... turn right, take a short toddle along the road and you are in the village. 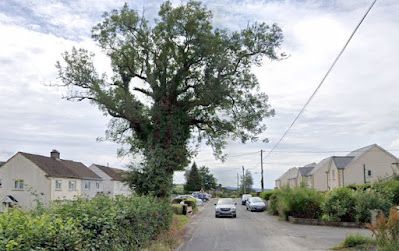 Maybe Mary, Joe and young Joshua will return for a summer break and to reminisce on that night of wonder many years previously?
Meanwhile, once again thanks to Roy, a few pictures of festive destinations on show in Sheffield.
From First Bus:- 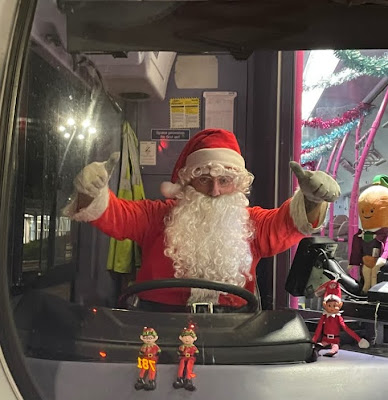 And from T M Travel:-

But the merriment is actually subdued in reality.

"Some changes" is a euphemism for reducing many eveningh services to HOURLY! Who is going to use an evening bus when they are so infrequent.  Here is a sample from the prestigious X78.

The "excuse" is staff shortages but fbb suspects a cost saving ploy. Whatever thr reson, passenhger numbers in thre evening will plummet and services will be even less viable financially.
When will they ever learn?
Next X57 blog - plus : Wednesday 29th December
Posted by fatbusbloke at 02:00