A Book Of Bounteous Beauty

It is such a delight to see a bus company working hard to promote itself, its services and its fares, despite the difficulties that the industry has suffered (and will continue to suffer well into 2022!) for the last 18 months. Because fbb is convinced that "Building Back Better" will be substantially enhanced with good printed publicity, he will review the consett book in some detail.
Before continuing - apologies for poor quality of some of these pictures. With family in residence for the weekend, it was hard to find an opportunity and space to prepare these pictures. But you will get the idea!
We begin with a two page spread; an index and a page telling us how wonderful buses are in the Consett area. If the timetable book is a true reflection of how things are on the ground, the compasy is right to indulge in a little self-adulation. 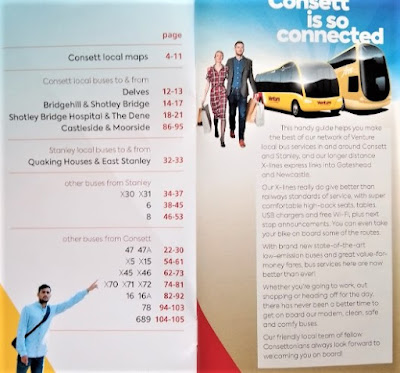 The index is important as it does help in navigating round the complex route numbers used. Oddly, despite Go Ahead's enthusiasm for brands, they are not shown in this index. You might wonder why.
Next ... 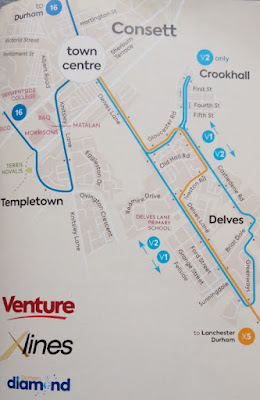 ... come maps; the above being of local "Venture" branded routes V1 and V2, both ways round a loop with a jiggle to Crockhall on some journeys. Although not too clear from fbb's poor picture taking, all stops are shown and a good selection of road names. Combine this with a helpful driver and you will not miss your stop, surely?
Rather than try to squeeze everything on one Consett map, the above is one of FOUR showing routes in different quadrants of the town. Below is the area to the north including the important Shotley Bridge Hospital. 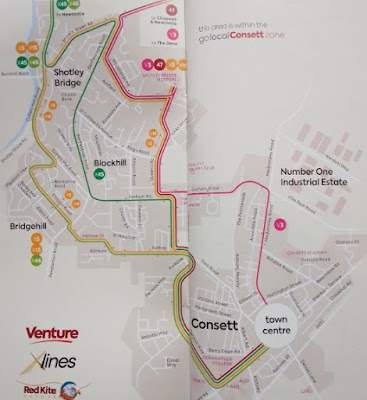 You need a map because the Hospital is served by four routes ... 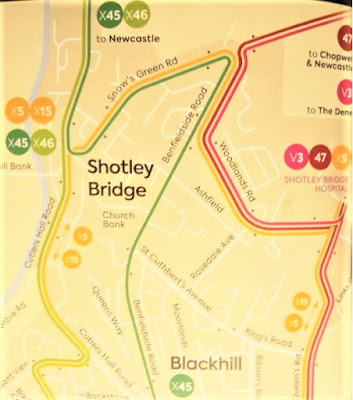 ... but fear not, fretful potential passenger, Go Ahead have provided you with several summary timetables to offer coordinated services where local and longer distance routes combine to provide a good well-spaced frequency. Below is that for the hospital area.

Each timetable, by the way, has a thumbnail map of the route and, more importantly, a page number reference to where the big map can be found. 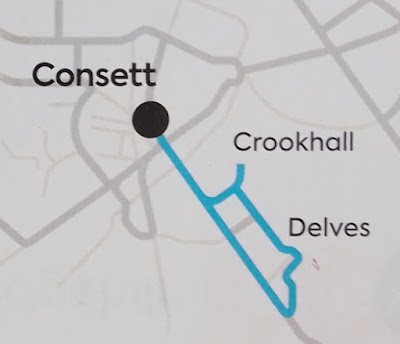 It is all wonderfully helpful and easy to use, so much so that fbb would feel utterly confident that he could find his way, omnibologically speaking round Consett and its environs with consummate ease.
And, of course, full versions of the summarised timetables are all available. 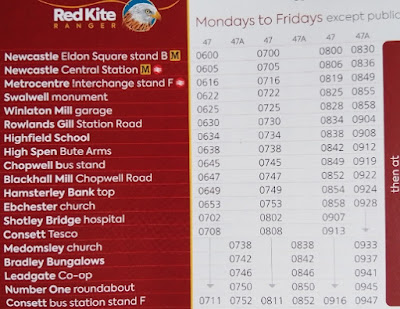 There is even a reminder of what a red kite might be! 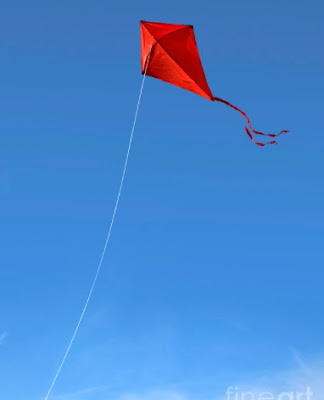 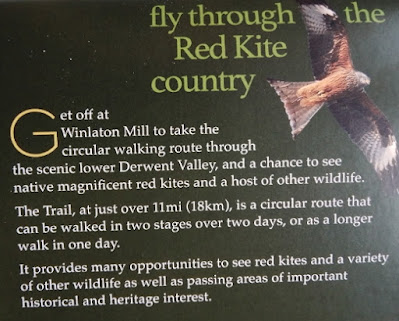 And maybe you fancy a chat to Earl Grey after enjoying his eponymous bergamot flavoured beverage? Well you will find him, not particularly communicative, atop a column in Newcastle. 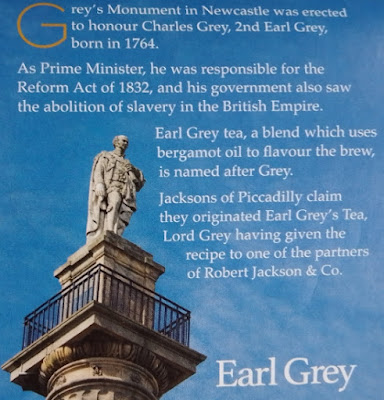 The Monument was erected to acclaim Earl Grey for the passing of the Great Reform Act of 1832 and stands at the head of Grey Street. It consists of a statue of Lord Grey standing atop a Roman Doric column on a pedestal of local sandstone, 135-foot-high in total. The column was designed by local architects John and Benjamin Green, and the statue was created by the sculptor Edward Hodges Baily, creator of Nelson's statue in Trafalgar Square.
The monument lends its name to Monument Metro station, located directly underneath, and to the Monument Mall Shopping Centre. The surrounding area is simply known as Monument.
A spiral staircase leads to a viewing platform at the top of the monument, which is occasionally opened to the public
Back to Consett!
Broad brush guidance is given for fares, both throughout the Go Ahead operating area ... 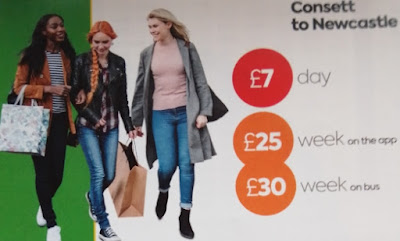 ... and locally in Consett. The Consett area is clearly defined on and by the maps. 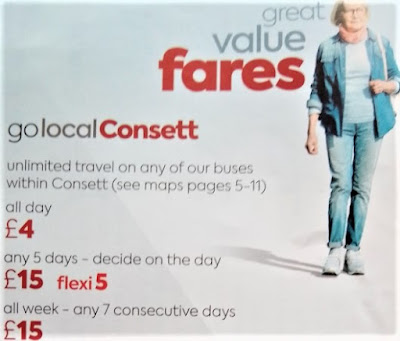 The mathematically inclined will not need telling, but the less adept at mental arithmetic might, that the £15 weekly deal works out at just £2.50 a day for six of the seven days travel. BARGAIN even if you chill at home on the Sabbath.
Tomorrow, something completely different - but see "Snippets" below!
-o-o-o-o-o-o-o-o-o-o-o-o-o-o-o-o-o-o-

It is worth dwelling on the meeting with Simeon and Anna at Jesus' Dedication. The location, the TEMPLE had been the centre of worship since the time of King Solomon; and before that its forerunner was the Tabernacle (posh word for "tent"), the portable temple used in the desert wanderings; and in modified form during the kingships of Saul and David.
Simeon had hinted openly that Jesus life would be one of TRAGEDY, at least in human terms ...
Simeon blessed them and said to Mary, his mother, “This child is chosen by God for the destruction and the salvation of many in Israel. He will be a sign from God which many people will speak against and so reveal their secret thoughts. And sorrow, like a sharp sword, will break your own heart.” 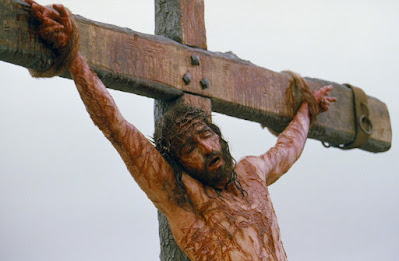 There is no "nice" way to end the story.
But then Anna spoke up.
There was a very old prophet, a widow named Anna, daughter of Phanuel of the tribe of Asher. She had been married for only seven years and was now eighty-four years old. She never left the Temple; day and night she worshipped God, fasting and praying. That very same hour she arrived and gave thanks to God and spoke about the child to all who were waiting for God to set Jerusalem free. 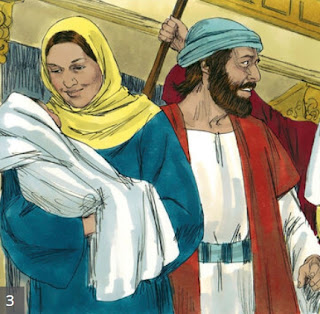 She looks a bit sprightly for 84!
But if Anna were offering an important TRUTH, the challenge is to bring together a death on a cross with the idea of setting people free. It is quite a big leap, a Leap Of Faith, you might say!
The letter "U" might be a problem?
-o-o-o-o-o-o-o-o-o-o-o-o-o-o-o-o-o-o-
Sheffield Snippet
How to help people get the best out of Sheffield's tram system. 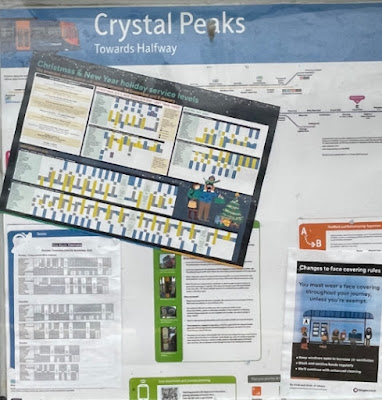 This is the display at the important stop near the Crystal Peaks shopping centre.
Why can't the PTE do better?
Why does Stagecoach Supertram tolerate this?
Would GoAhead North East condone such a display at Consett bus station?
Who Moved The Village?
The people of Cookridge might well be asking! Here is an extract from the National Rail data spotted by correspondent Rob. 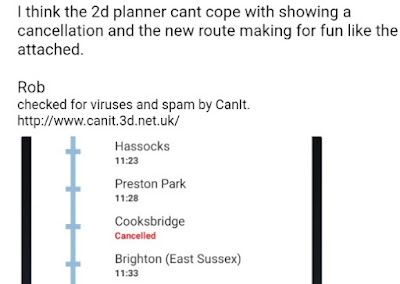 As far as fbb remembers, Preston Park is the last station, a suburban stop, just before arriving at Brighton. Cookridge is on the line from Haywards Heath to Lewes and on to Eastbourne. 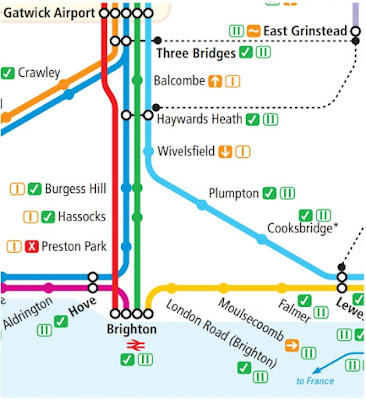 The route of the train is, of course, impossible.