Off To The Seaside 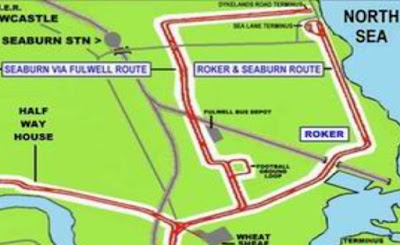 Until 1954, when the system closed, there were three tram routes travelling across the Wear Bridge from the centre of Sunderland. 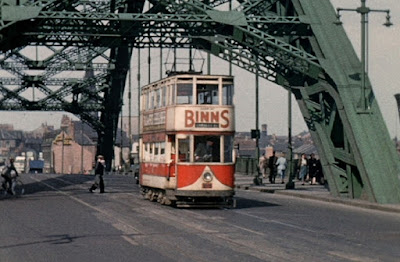 Off to the west is the line to Southwick (shown incomplete in the above map extract). The tram standing at the terminus ... 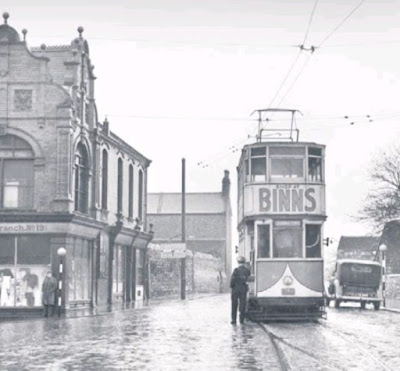 ...will run to Grangetown, to the south of the town. The building on the left in the above shot ... 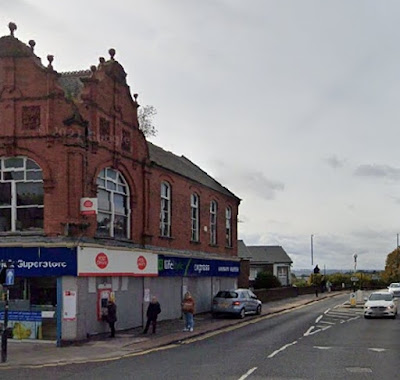 ... is still there, but much else at Southwick has changed. 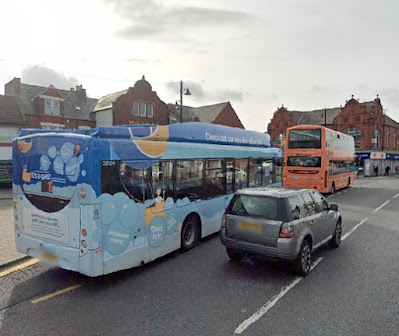 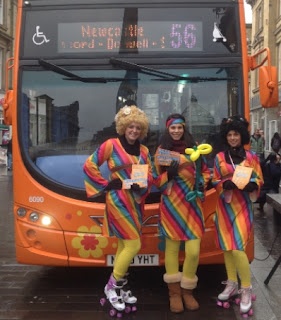 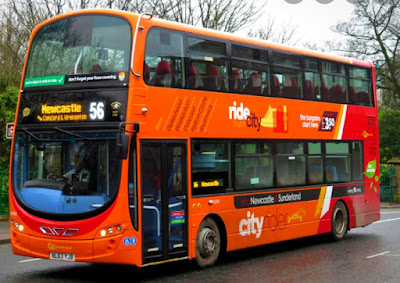 It runs every 15 minutes. Behind the Fab orange is a Stagecoach vehicle which, despite his gargantuan knowledge of buses in the North East (NOT!) fbb has failed to identify.
But see P.S. at the foot of this posting.
But, as will reveal itself, fbb's interest is with the two routes to Seaburn (tram map top right).
We are used to thinking of Sunderland in terms of its docks (1948 aerial view) ... 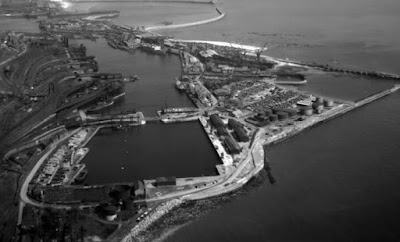 ... and ship building along the banks of the Wear. 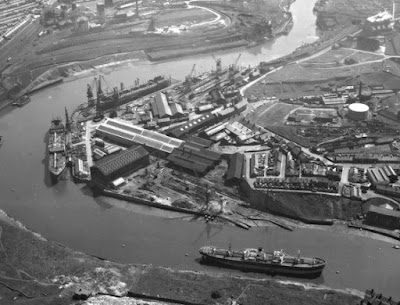 But we don't always think of Sunderland as a seaside resort. Yet the coast between Roker, Seaburn and northbound offers sandy beaches to accompany the chilly North Sea. The poster says it all. 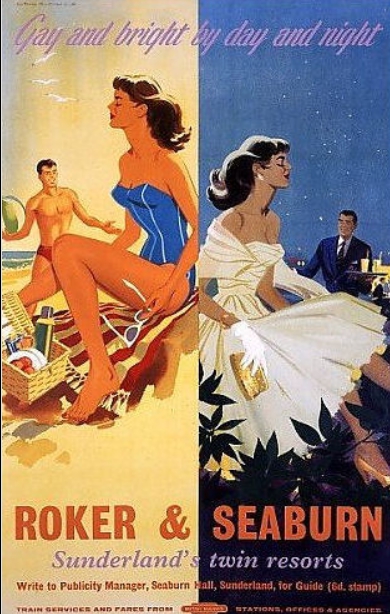 Below, in the early part of the 20th century, we see the beach well filled with bathing tents and refreshment stalls. 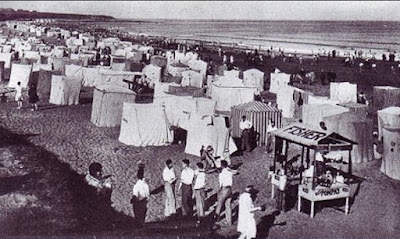 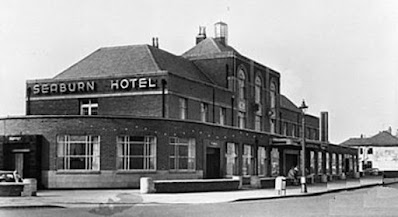 ... and the beaches remained very popular into the early 1960s. 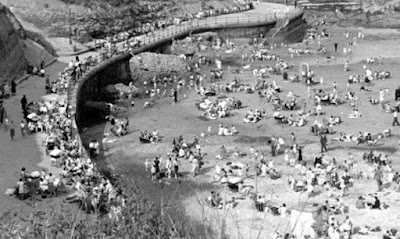 The tram via Fulwell to Seaburn met with the coastal route via Roker but the tracks were never joined. 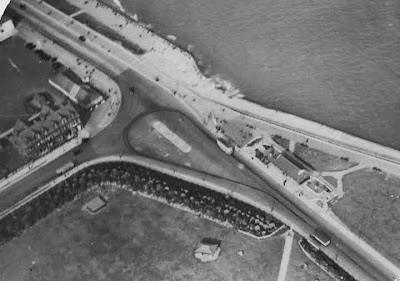 The Fulwell service finished in a simple stub end outside the hotel (above left) but the route via the coast was provided with a large turning circle. An "O" gauge model recreates the busy scene of the 40s and 50s. (but reduced in scale size). 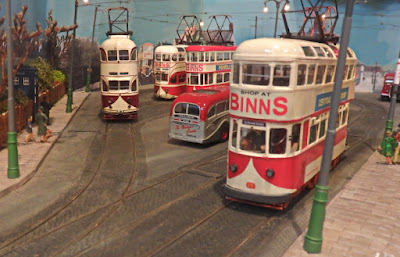 Trams would unload in the loop, waiting their turn to pick up at a shelter on the seaside side. 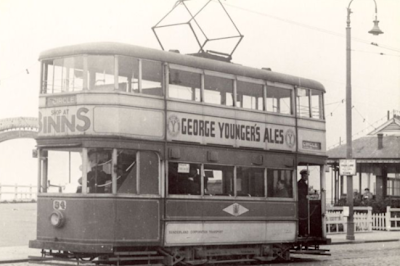 Don't forget that shelter!
Again, in the early days there would be sea front illuminations and, Blackpool-style, the joys of an illuminated tram. 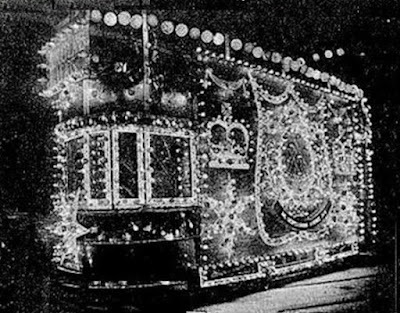 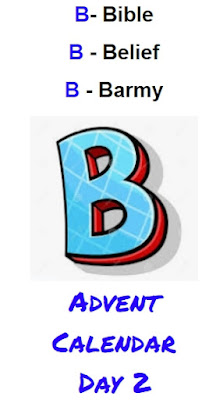 "You must be barmy to believe in the Bible when it tells of a Virgin Birth," say the knockers, "Virgin just meant a 'young gitl', not necessarily with an unbroken hymen, never having had sexual intercourse."

Mary was deeply troubled by the angel's message, and she wondered what his words meant

"You will become pregnant and give birth to a son, and you will name him Jesus. He will be great and will be called the Son of the Most High God. The Lord God will make him a king, as his ancestor David was, and he will be the king of the descendants of Jacob forever; his kingdom will never end!” 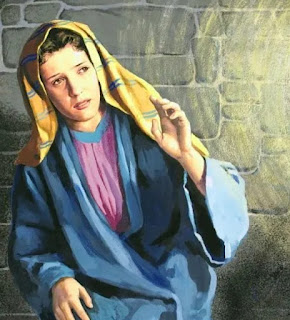 The angel answered, “The Holy Spirit will come on you, and God's power will rest upon you. For this reason the holy child will be called the Son of God."
The writer was Luke, a doctor, and he would know. The Greek language in which the New Testament was written is perfectly clear.
It was to be a miracle baby!
And, obviously, a God who is outside and beyond our universe and not bounded by its laws of physics or biology, can do whatever he wants. Dropping his seed into the womb of a teenage bride-to-be is a doddle for an omnipotent God!
But Christmas began long before any Mary or Angel!
-o-o-o-o-o-o-o-o-o-o-o-o-o-o-o-o-o-o-
Southwick - a P.S.
Stagecoach introduced gas powered buses to their Sunderland fleet from 2014/ 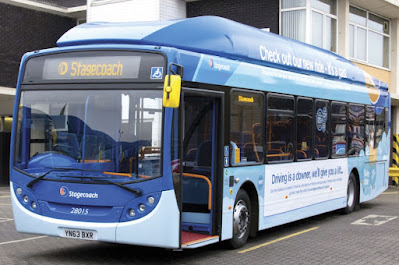 Routes 3 and 12/13 call at Southwick as per the Stagecoach route map. 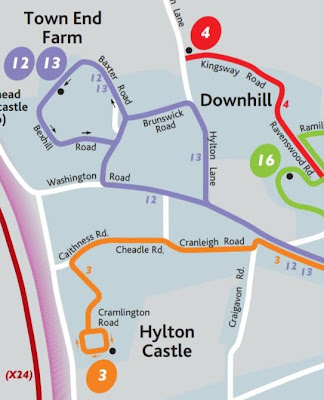 A close examination of the originally blogged picture suggests that the bus is on route 13 to Town End Farm. 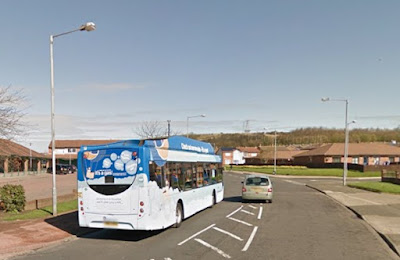 Bad house point for fbb for poor initial research - but later corrected!
Posted by fatbusbloke at 02:00