Or Have We : Bully For Boris?

At 2300 on Thursday 31st December 2020, the almost U K finally escaped from the clutches of Bruxelles beurocrats to regain its sovereignty and trade freely with the whole world ...

At 2300 on Thursday 31st December 2020, the almost U K confirmed the most crackpot political decision of modern history condemning this once-proud nation to becoming a third world economic disaster area.

Whatever our loyal reader's view, fbb has already experienced the delights of the UK's free trade deal with the EU.

So, instead of the third Berlin blog (which will follow later) fbb tells this exciting tale.

It begins with a tank wagon. 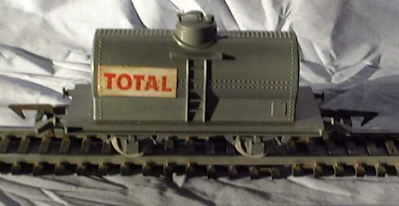 It was produced by the former French company Jouef (now part of Hornby) and was in the "junior" or "beginners" range. The French called it a "jouet"; a toy as apposed to a model! These toys were usually part of cheap train sets (often with clockwork locos) aimed at the youngest users. The models were even more crude than the standard fare, but also sold in the UK under the Playcraft brand up to the early 1970s.

Apart from the above picture and a short paragraph on the Playcraft Trains enthusiast (yes, there are some) web site, the wagon in question simply did not appear on UK sales or auction pages.

So fbb logged on to Google.fr, switched on his ex French teacher's brain cells (weak, rusty but adequate - he taught 7 and 8 year-olds, so standards were not high!) and began a search for "Jouef wagons citernes images." 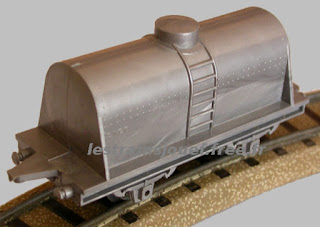 ... dating from 1954/1955 - but that was not the right one. It was never sold in the UK in that form with those couplings and therefore excluded itself from the fbb collection. But here was a more likely candidate ... 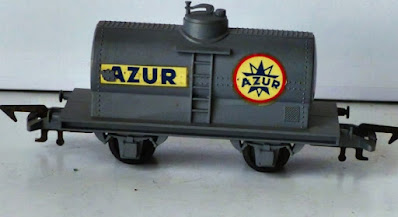 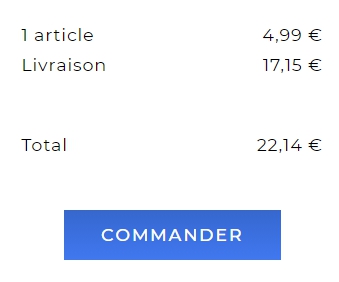 But the "Livraison" was over £15 - so no chance. Another site looked more hopeful and offered the very early model also but LaNaL couplings for UK sale .. 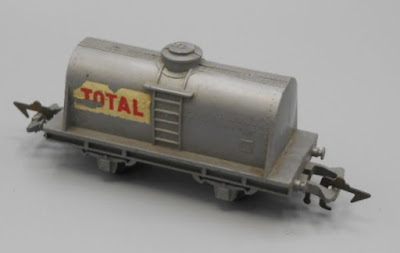 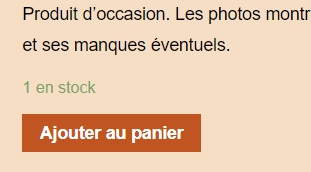 Having "ajoute au panier", fbb filled in all the usual details, having been warned that "livraison" would be added at the end of the order. Plenty of time to abort, then.
But the site didn't want fbb's money and kept telling him (in French) to check that his address was correct. Even in his dotage, the old bloke can, just about, remember his own address,
Fortunately there was a "Contact" button ("Contact" in French!) so fbb sent off an email in his best unchecked Franglais!
Objet : wagon citerne jouet Jouef - plastique, gris
Je considere acheter ce wagon (2.00 Euro) mais, apparement celui n'est possible "en ligne". Pouvez vous m'aider
Merci Beaucoup.
It was Saturday, not renowned for being a working day in La Belle France, so fbb was not expecting a reply until Monday. But less than an hour later, Chritophe responded ...
Bonjour,
Cela fonctionne sauf pour le Royaume-Uni suite au Brexit.
J'attends d'avoir toutes les autorisations douanières pour le réactiver.
Cordialement,
For those whose French is even worse remembered than fbb's, it says that the site works fine for anywhere except the UK because of Brexit. ("Brexit" in French")!
Christophe is waiting to obtain all the necessary customs authorisations and will then re-activate the site for UK buyers.
All for a £1.50 cheap toy tank wagon!
Beurocracy still rules despite Boris' big beautiful brexit blockage busting bulldozer.
And for fbb, the search will continue.
Vois For The Boys (And Girls)?

There are numerous electric scooter sharing services around but Alan has non-participatory experience of those operating in Northampton. You need to download the App to understand the system fully but the service operates in several "cities" (According to the Vois boys Kettering is a city!) in the UK ... 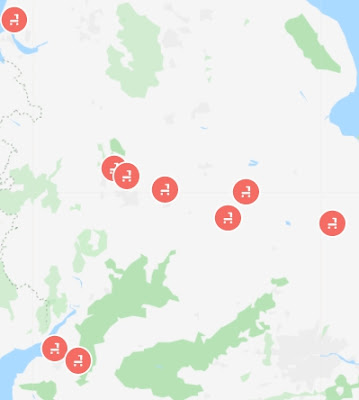 Because it is zappy new technology, you aren't allowed anything as helpful as names printed on the map, which would be very "old school". You have to hover over with your pointer and the names appear. fbb will save you the trouble. Vois toys are available in Liverpool, Sandwell (recently promoted by Vois to city status), Brum, Coventry, Northampton, Kettering, Cambridge, Brizzle and Bath.
The system is simple. First find your scooter ... 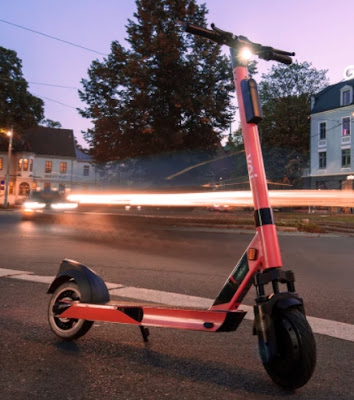 ... activate it with its QR code dowloaded to your App and away you go. 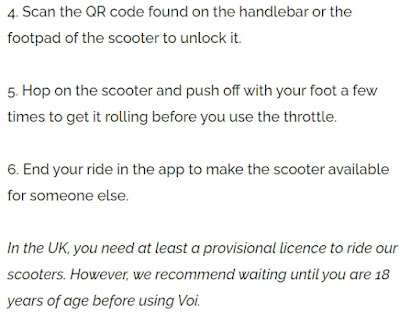 Because the Vois make no noise, there have been concerns about the safety of other pedestrians; also, as you are supposed to scoot on the road and not on pavements, about the safety of the scooterer. But Vois enjoys a good safety record (well, they would say that, wouldn't they) ... 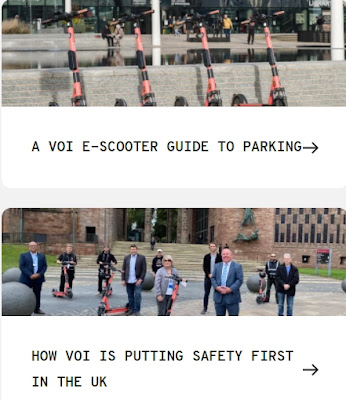 ... in the UK and possibly in all the other "Cities" where they scoot. 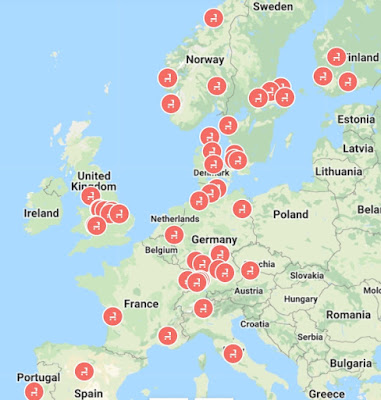 According to Alan, the system is that you book your scoot, ride home and "park" the pink personnel propulsion provider on any convenient grass verge, Here are two near Alan's home way out in Duston. 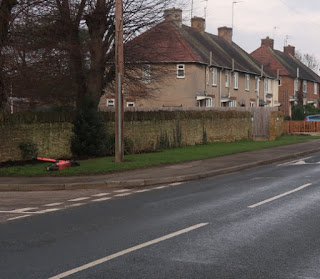 Yes, there's one on the left, carefully abandoned ... 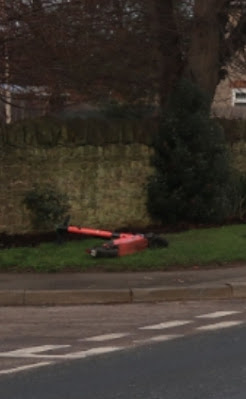 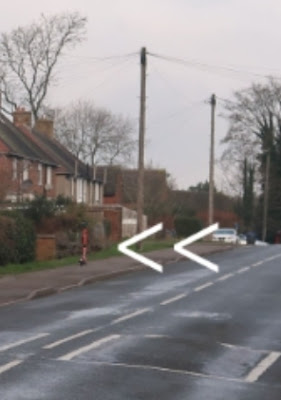 They are both "parked" and, like a fairly harmless dalek, "deactivated". Later, Davros will turn up in a van and rescue them..
Somewhere in this process, money changes hands; but from a financial point of view App-lessness is haplessness, so fbb cannot educate his readers as to the cost.
Apparently a tech-age crime involves "hacking" a scooter, unlocking the electronic locks and thus equipping yourself with a free ride - anywhere. The boys from Vois are anxious to stress that their scooters are heavily protected against such heinous crimes!
Tomorrow we return to Berlin and "some other stuff".
This Was Worrying - Briefly 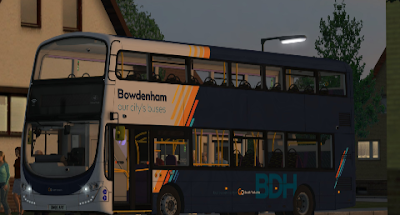 But, don't panic, Captain Mainwaring!
It's a simulation innit?
Next Monday Variety blog : Monday 4th January
Posted by fatbusbloke at 02:00