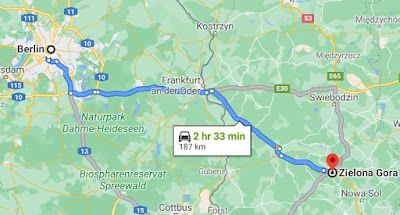 fbb has visited Berlin but once en route to nephews wedding in Zielona Gora across the border in Poland. There was a little time for sightseeing and, of course, fbb insisted on riding Die Hunderter.
Die öffentliche Buslinie 100 startet am Bahnhof Zoologischer Garten und endet am Alexanderplatz. Sehenswürdigkeiten werden während der Fahrt nicht kommentiert, dafür ist die Tour eine kostengünstige Gelegenheit eine Stadtrundfahrt im Doppeldeckerbus zu unternehmen.
This runs from Zoo via the Brandenburg Gate (Tor in German) and is, as mentioned above, a double decker. 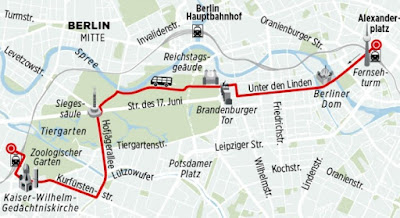 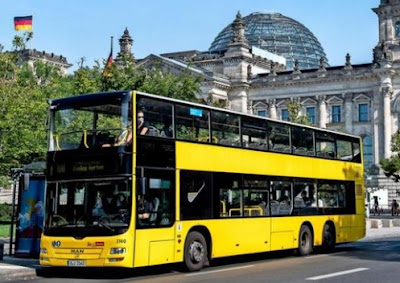 Since those far-off days (17 years ago) the transport infrastructure has changed significantly. Notably Berlin Hauptbahnhof has appeared, 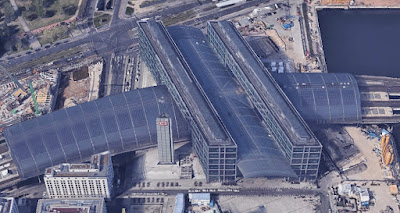 The station was fully operational from 2006, built on the site of an old terminal building, the Lehrter Bahnhof. 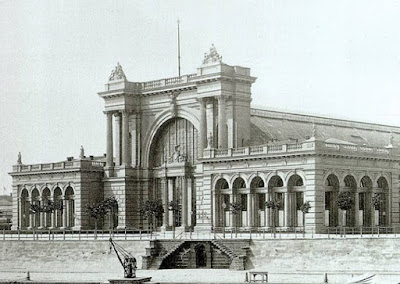 The new station sits on a crossroads of  railway lines running east west and north south. The latter is in tunnel ... 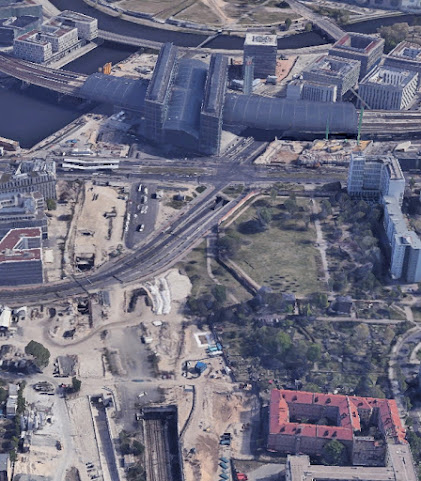 ... whereas the historic east west tracks are in a viaduct. Both routes carry regional trains and S-Bahn (outer suburban) services all under one massive roof! Nearby is a posh new tram stop ... 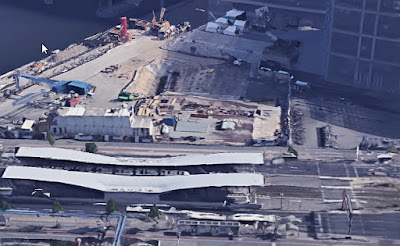 ...which looks a lot smarter from ground level. 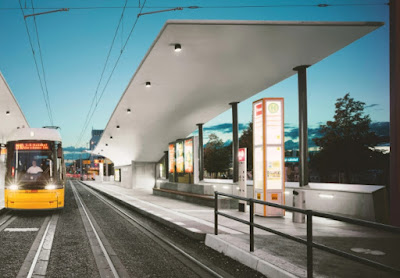 The Hauptbahnhof also gained an Undeground station and line which opened in 2009 ... 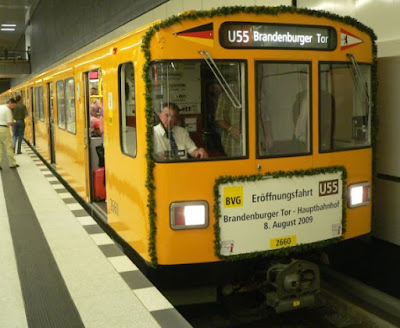 ... numbered U55. Those with a passing knowledge of public transport in Berlin maybe surprised that the city had at least 55 underground lines. But all was not what it seemed. 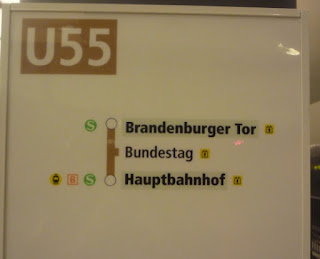 It only served three stops, terminating at the Brandenburg Gate which is almost within walking distance, even for a creaky fbb. The running time, end to end, is three minutes.
The U55 had no connection with other lines and, like London's "Drain" (Waterloo and City), trains had to be lowered by crane ... 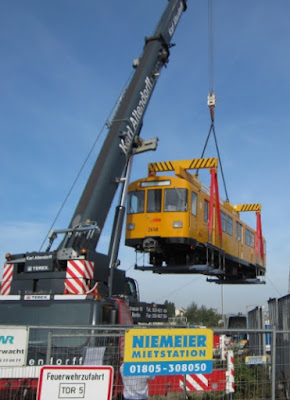 ... into a concrete pit and thus on to the rails. 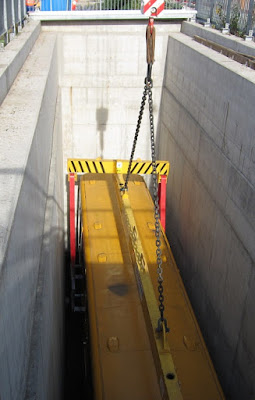 Because the line went nowhere much and many might well decide to walk, a two car train was more than adequate for the crowds.

At Brandenburg Gate, the U55 connected with two more S-Bahn lines, but passengers could always change at Friedrichstrasse.
But a later map gives the game away. 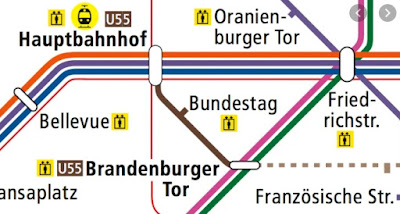 The plan was always to go further east. We will pick up that narrative in tomorrow's blog.
In the meantime just a reminder of how things were at the Brandenburg Gate. 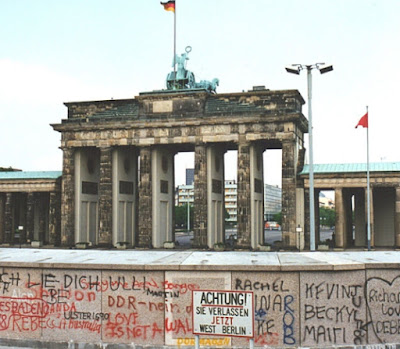 So much control freakery exuded from the Kremlin that, at one time, maps of "Russian" Berlin ... 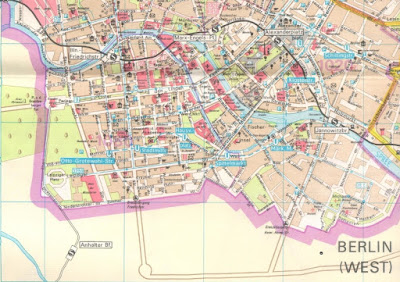 ... ignored the West completely - the light purple wall being an impenetrable barrier. The West wasn't much better, relegating Underground services in East Berlin to inadequately labelled thin lines and emphasising the barrier.. 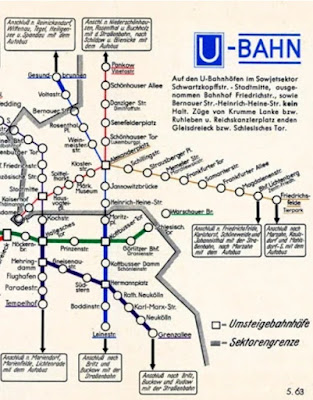 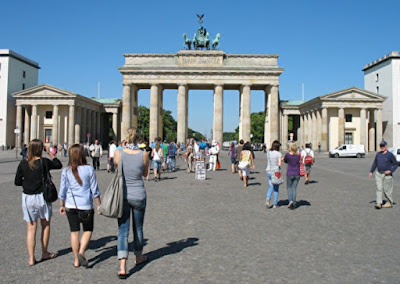 ... and even after the wall came down, buses were sent "round the back" meaning that the famous route 100 allowed for just a passing view of the edifice, unlike in the olden days. 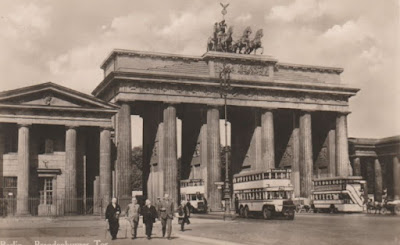 You can still be reminded of those dark days for a Great City, now with a simple line of stone setts to mark the route of the wall. 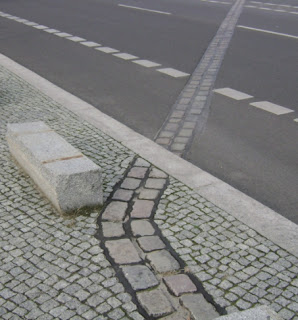 The Brandenburg Gate is an 18th-century neoclassical monument in Berlin, built on the orders of Prussian king Frederick William II after the temporary restoration of order during the Batavian Revolution. One of the best-known landmarks of Germany, it was built on the site of a former city gate that marked the start of the road from Berlin to the town of Brandenburg an der Havel, which used to be capital of the Margraviate of Brandenburg.
Tomorrow, we see what happened to the U55 earlier last year.
Sigh. Another year gone ..... !
And, apologies for getting muxed ip with dates in a few recent blogs; one of the dubious privileges of old age. Today IS 1st January,