What IS an "Underground" Train Service? 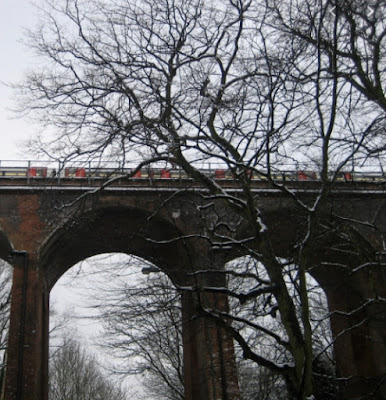 Under the ground? Urban? Busy? Multiple track? Complex Stations ans Interchanges? Above all, frequent "turn up and go" services?
The above picture shows a Northern Line train on Dollis Hill Viaduct on the single track branch from Finchley Central to Mill Hill East ... 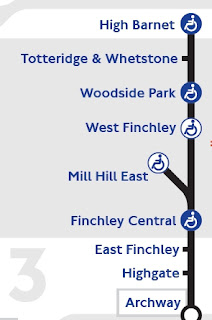 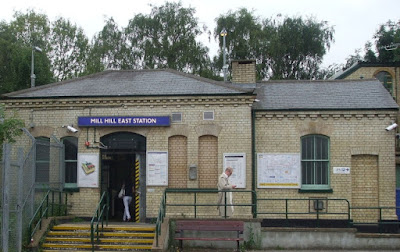 There are good, historic reasons why it is like it is, but it really does not fit with the London Underground station (or line?) stereotype.
Even the great Metropolitan line service gets a bit thin and weedy at the edges.
Chesham every 30 minutes. 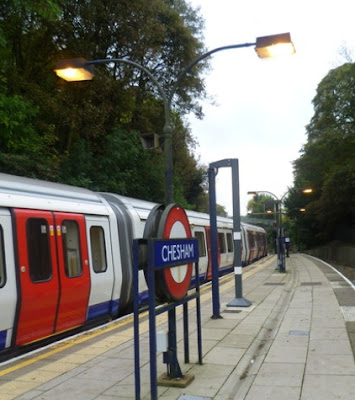 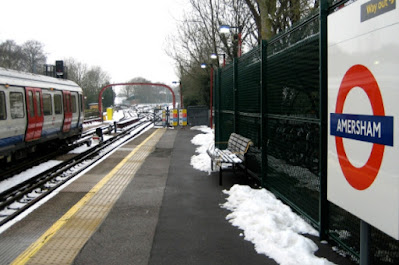 ... enhanced by a "fast" Chiltern train also every 30; with the added complication whereby some peak hour Metropolitan trains miss out some of the stops. 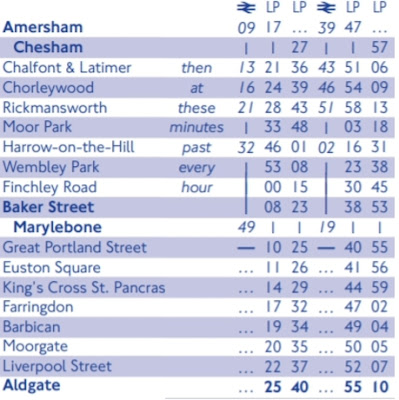 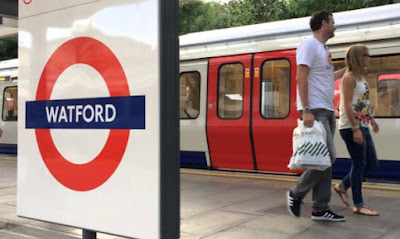 But it is true that for most customers, the Underground network is perceived as a "turn-up-and-go" all stops service running frequently seven days a week. South of Harrow, the Metropolitan fulfills these criteria ... 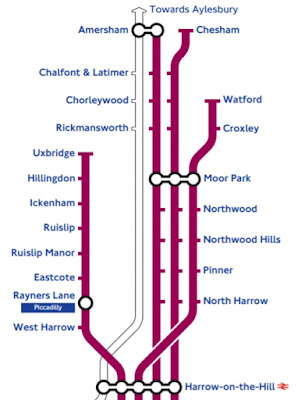 ... even if some of the fringes definitely need a "proper" timetable.
So, does it matter that bits of the Thameslink network now included on the Underground map are no more frequent than every 30 minutes?
Here is the Sutton loop, part of the original Thameslink service pattern. 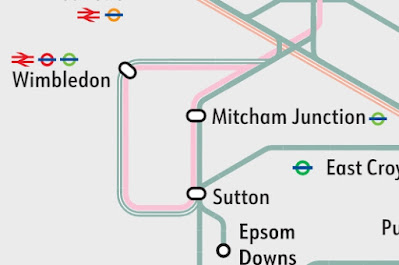 The Thameslink service (every 30 minutes each way round) is shown in a rather weedy pink. The new Underground map shows the service in full. (click on ANY of the maps for a larger view) 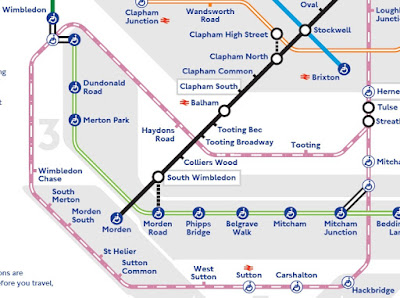 It does call at all stops.
But would you want to use Thameslink to get to Sutton from Central London? You might, if your were starting at St Pancras ... 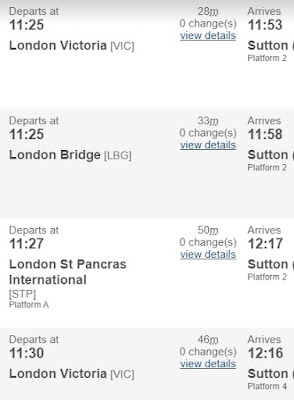 ... but, if your departure point were flexible, you would probably prefer Victoria or London Bridge with a saving of 20 minutes; and you would avoid the 1130 from Victoria. But, of course, only the route from St P appears on the new "Underground" map.
The "problem" is as old as the Underground itself. How would an unaware visitor think of getting from Waterloo to Wimbledon, for example? 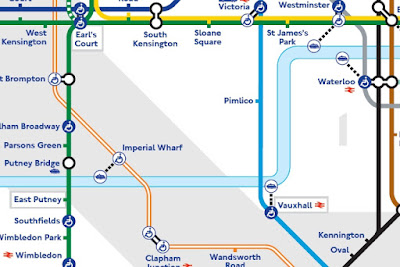 It is easy with an Underground map in hand! Catch anything from Waterloo (upper right) to Charing Cross or Westminster (the congnoscenti would avoid the Jubilee Line because of long access tunnels at Waterloo) and then District to Wimbledon (bottom left). TfL has other ideas! 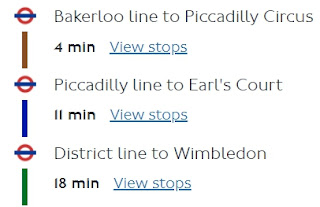 Whatever, 'tis a complex and tedious journey with much interchange stress and potential for ghastly errors. Much simpler is to catch a South Western Railway train from the main line platforms at Waterloo and it will take you approx 15 minutes.
But the frequent local service South West from Waterloo does not appear on the Underground map although it is far more frequent than any of the Thameslink lines.
Sadly, First don't offer a summary table any more but there are at least 8 trains an hour ...

... if you know where to look.
So, is the answer to make more use of the all-systems London map - all National Rail lines colour coded according to London terminus?

It makes a better job than the second version of the new Underground attempt at Hampstead ...

...and much better job coming out of Kings Cross. 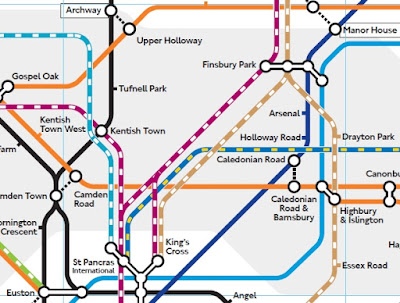 It shows alternative services to Sutton ... 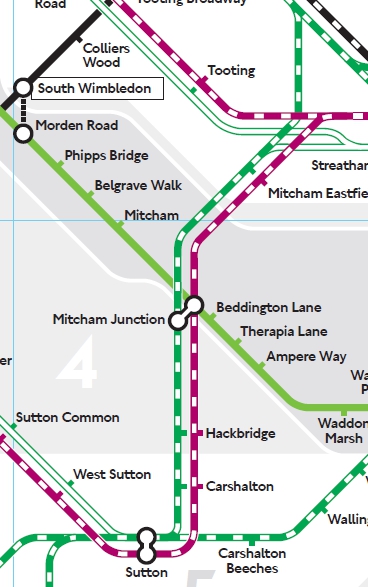 ... and the sensible way to get from Waterloo (top right) to Wimbledon (bottom left). 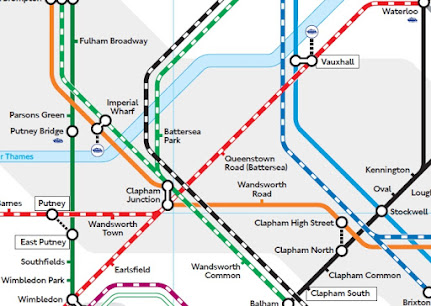 Sadly it fails on one of the key mantras of public transport information.
You can either be comprehensive or comprehensible but never both!
There is just too much information. As a record of what is available, it is a triumph of the cartographer's skill - maybe not at Watford ... 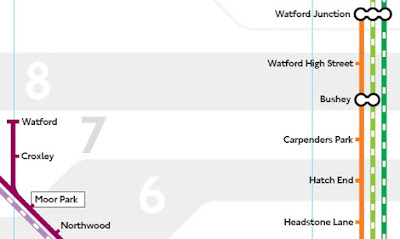 ... but the whole shebang is just too cluttered for the average user.
Harry Beck's masterpiece Underground diagram has now been compromised by clutter; and the combined map suffers from the same problem in spades. Is there any way of making things simple for the non-expert user?
Maybe ...
Next Undergrpound map blog : Friday 8th January
Posted by fatbusbloke at 02:00