A Plan For Buses - A Map Would Be a Start 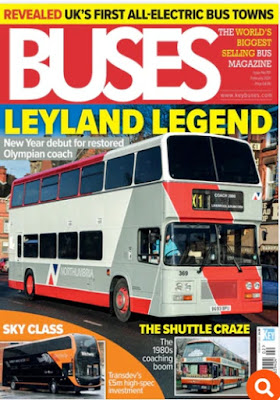 In the "Inside Track" column of the February edition of "Buses", Roger French comments on the expected Bus Strategy publication.

He accurately predicts the content of this "far reaching" (?) government policy document; in summary, a load of ineffective guff! But you should buy the magazine and read his article to enjoy his prophetic prognostications. It is well worth the cover price.
Even better, Rog gives us his own bus strategy. 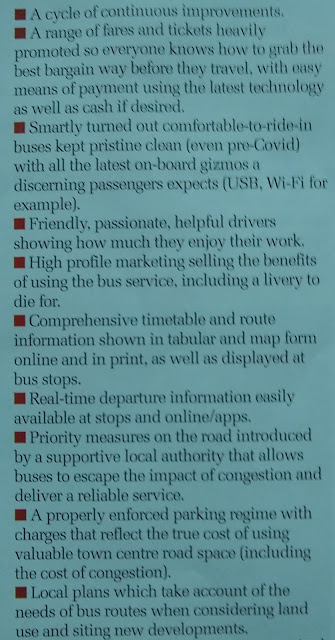 Those who take an interest in the industry will agree wholeheartedly with this, especially the phrase "and in print". Also in this edition is a little note about Transport for London. 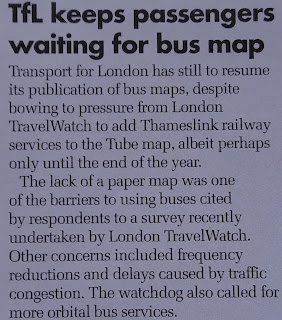 Roger's headline says it all!

fbb ia not familiar with which of the Paris maps is provided in print, but, when he last visited a few years ago both the diagram and the geographical Metro maps were readily available. fbb wore both of his to shreds during his four day visit!
Back then the larger area was available online including bus, so fbb down loaded a tiled version which accompanied him but remained in the hotel for daily research and planning purposes; too bulky to carry around!
These blogs have been looking at the cartographic quality of the information provided and even fbb has to accept that a fully detailed printed map of the whole Paris and RER area would be unwieldy to use "en route" - and decided unpopular with the locals on busy trains, trams and buses.
But there is an excellent map that covers the whole of the RER area. In its centre is a miniaturised version of the city area map ... 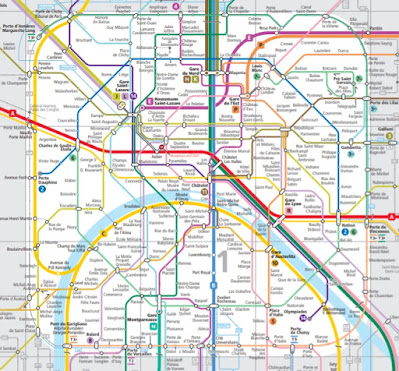 Again, all Metro and tram services are there (no bus) but in a more curvaceous diagram than the Metro-only version. But, you will remember (of course you will) that an awful lot now happens at the edges of the formerly compact city area. In the north ...

... three tram routes and two RER services disappear over the edge. In the north east ... 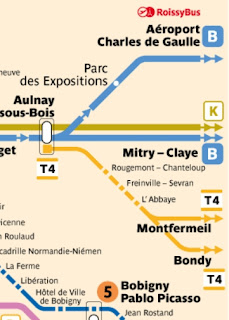 ... is Tram 4.
Beyond La Defense in the west we have lots of RER A and Tram 2, soon to be joined by the extension of RER E. 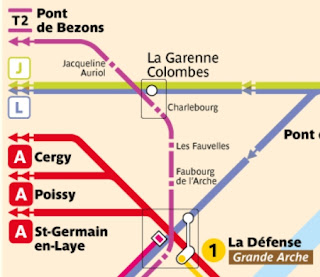 The RER diagram completes this incomplete picture. (most graphics below can be enlarged; just click on them)
In the north, by way of an example, we have trams in full detail ... 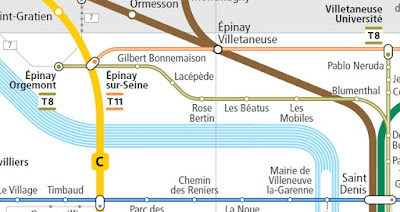 ... showing us that Tram 8 has two outer termini. We have suburban bus routes ... 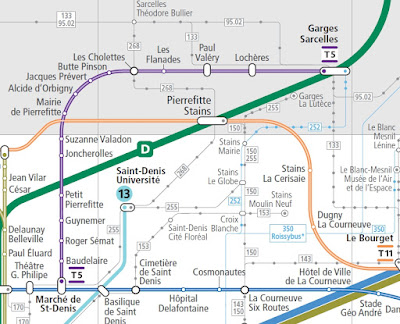 ... and full details of the lettered non-RER suburban services as well as the RER itself. 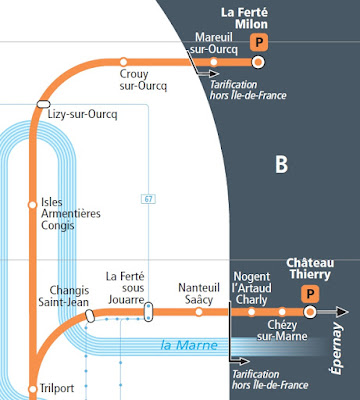 There are always anomalies in any network and users may, initially be surprised to see that Tram 4 (another mini-network) ... 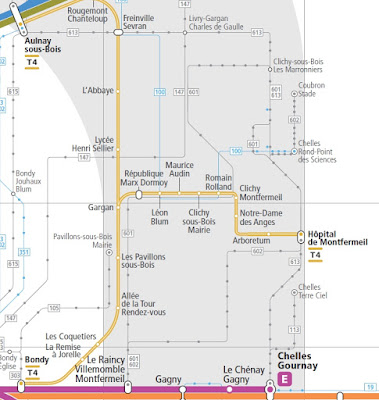 That is because they are NOT RATP services. Tram 4 is a Tram Train, somewhat more useful than the feeble effort in Sheffield, providing links with RER B and E. 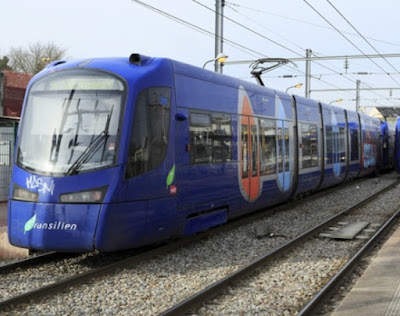 It is thus an S N C F service under the Ile de France brand of Transilien - but, of course, the operator is irrelevant as it is clearly part of the "Paris" network.
Tram 11 is also S N C F ... 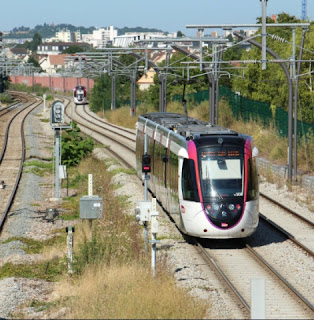 ... but branded differently from the other trams.

The "Express" means that it is more like a train than a tram with stops spaced more widely. Needless to say, there are plans for extension!

The knowledgeable (or observant) amongst our readers might wonder about Trams 10 and 12. Fear not, keen people, Tram 10 is a-building ... 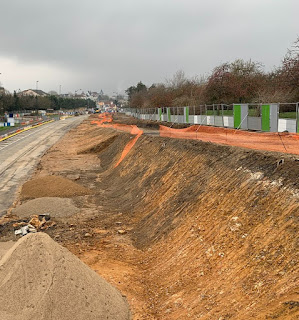 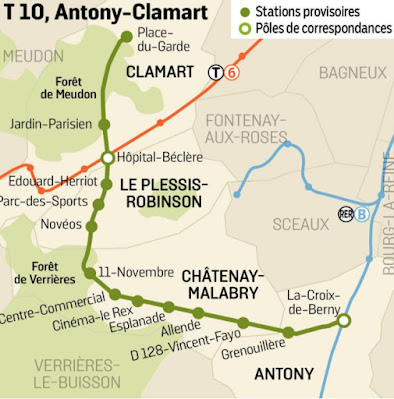 It will serve Le Croix de Berny (RER B) and Hopital Beclere (T6) in the south west of the city. 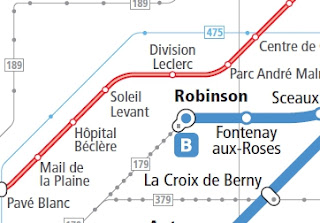 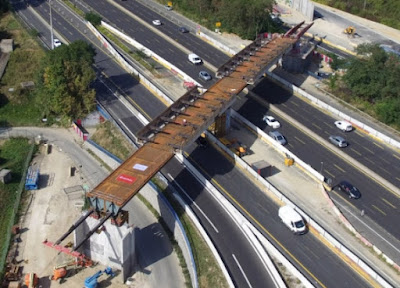 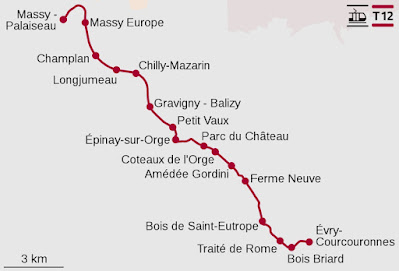 Looking at the RER map, we see that T12 will supplant part of RER C from Massey Palaiseau (top left on diagram below) to Epinay Sur Orge (upper right) ... 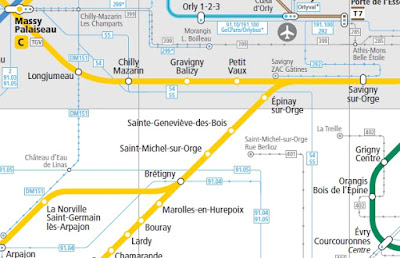 ... then terminating at Evry Courcouronnes on RER D (bottom right).
And then there are new Metros planned or under construction. Outer circle line 15 connects with 16 and 17 plus an extension of existing line 11 ... 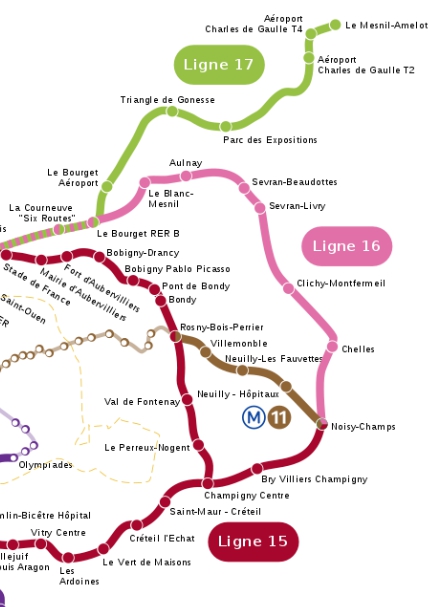 ... all in the east/north east. Line 15 also connects with 18 via the southern extension to existing line 14 in the south and west. 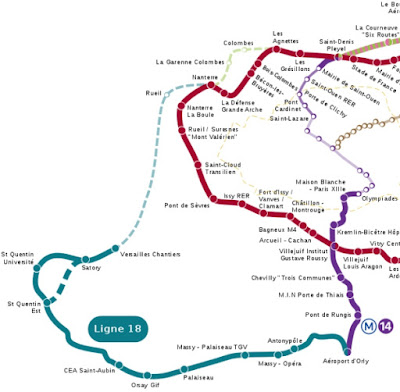 These orbital Metro lines will be notably different from the existing Metro, much more like real trains with stops spaced further apart that those un the city area.
They will be difficult to fit in with the existing Metro-only maps, both geographic and diagrammatic. Paris will then have the same problems as London. Will the Metro map exclude lines 15 to 18? And how will the fares work?  All the above developments are well outside the area included in "Le Ticket".
All this was, originally, due to be completed by 2030. That was BV - before the Virus.
Maybe some of it will be postponed.
But whatever and whenever it happens, we can be sure that the maps will be excellent and useable.
Paris' Metro was demanded by the people in response to the huge (apparent?) success of London's Underground; so how many new tramways and Metro lines are under construction in our Capital?
Erm ....
We seem to have lost our (head)way!
Box For Sale?

One of fbb's latest tank wagon acquisitions arrived very well packed in the above box. The old man had never heard of "Roundhouse Products". It certainly wasn't anything from here ... 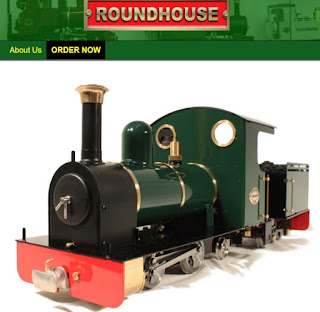 ... they make live steam locos which wouldn't fit in a small cardboard box!
This Roundhouse is a defunct American company making HO models and kits. In this box once was an ore car ... 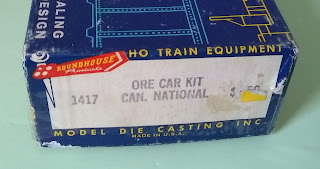 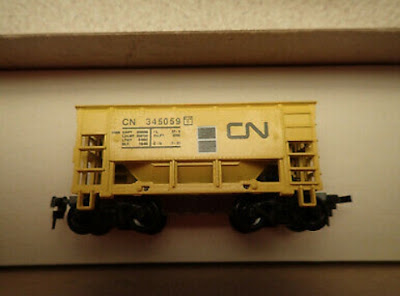 ... but fortunately NOT for sale in the UK - so excluded from fbb's collection parameters.
Next Variety blog : Sunday 24th January
Posted by fatbusbloke at 02:00