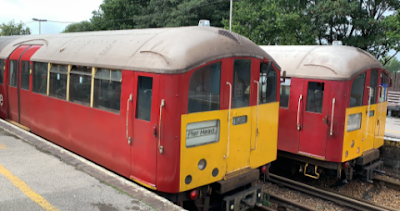 In theory Island Line offered a service of two trains an hour not half-hourly but spaced at 20 and 40 minutes. In recent times, the best the lads at St Johns Road depot could manage was one train an hour and that was frequently replaced by buses. As well as swish new old refurbished underground trains and, as part of a massive track upgrade, a passing loop is to be re-instated at Brading, meaning that a proper clock-face service every 30 minutes can be operated.
As an added bonus this means that connections to the Portsmouth to Ryde Pier Head ferry will make sense when the boats are also running every 30 minutes.
Until the line re-opens at the beginning of April an hourly bus service is being provided. 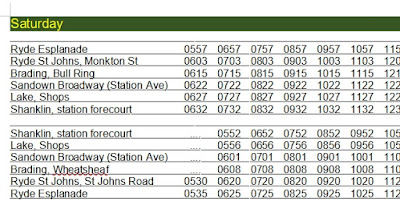 Extra journeys are scheduled for the kiddies at Sandown Bay Academy ... 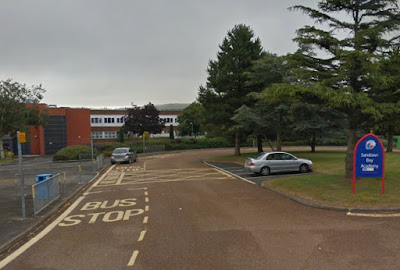 ... which is sufficiently close to Sandown station ...

... to allow some of the "students" thirsting for knowledge to journey to and fro by train (station lower right).

It used to be called Sandown High School when fbb worked there "on supply" and, back then, they hadn't invented different finish times on different days of the week.
So a batch First Bus vehicles, all from Brizzle (?), duly traversed the Solent by ferry. 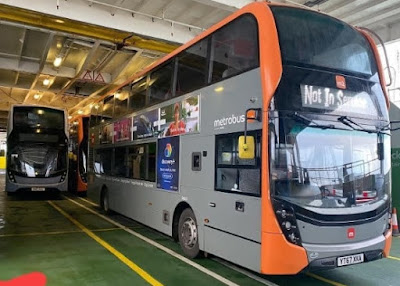 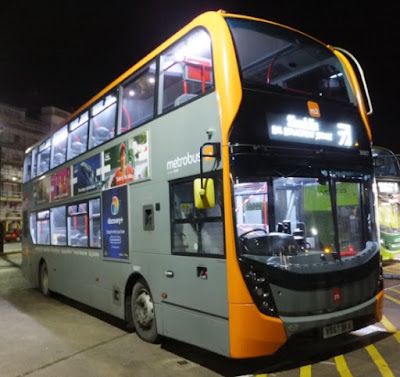 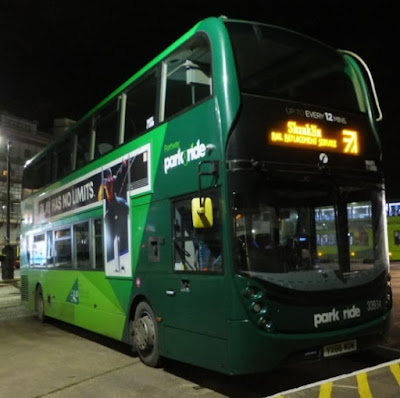 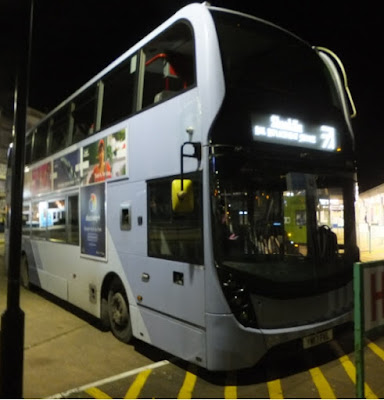 All these arrangements are, of course, DV - dependent on the virus!
Lovely Logo Languishes, Lost? 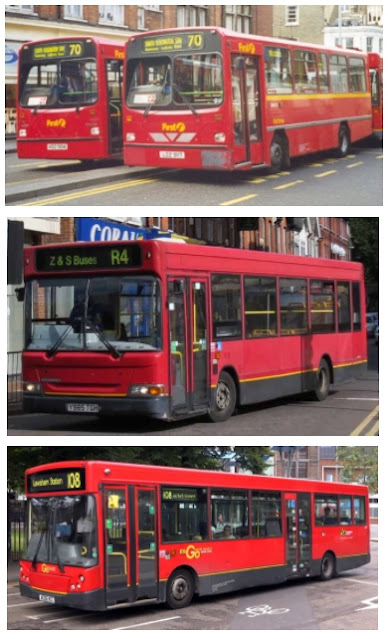 We are all familiar with the ubiquitous Dennis Dart, appearing in all sorts of shapes and sizes. It bridged the gap between minibuses (too small) and full sized single deckers (too long). London had lots and lots of them, again in all shapes and sizes.
Arguably the oddest shape was the Carlyle (later Duple) bodied example. 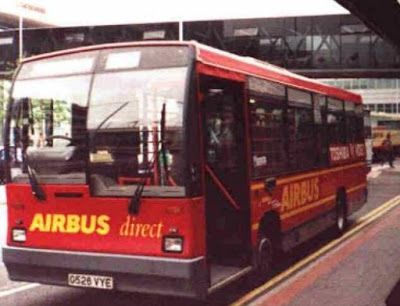 Ultimately large numbers found themselves all over the country - even the world. 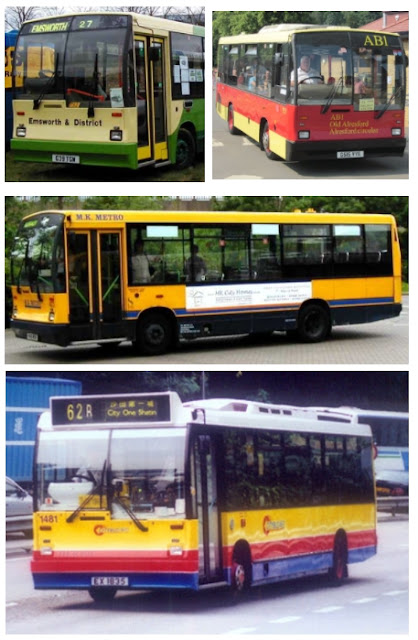 As a fine exemplar of their tendency to roam, a couple of ex-London Darts escaped across the big wide ocean to .... 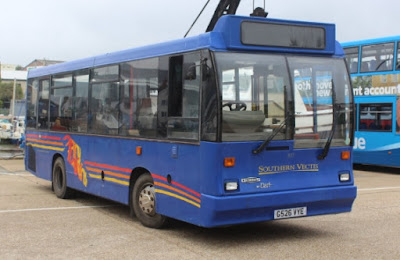 ...the Isle of Wight; where they tended to run to Cowes Pontoon through the very thin entrance. 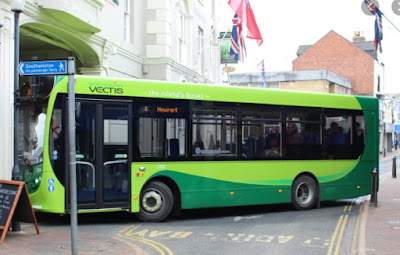 But it was decided that one of these creatures would be used as an advertising bus for the popular Vectis Rover tickets and it was painted in a ghastly garish green and yellow.
So it was that, when the blue dart with squiggles came in to the care of the Isle of Wight Bus Museum, the powers that be decided to repaint it in the Rover livery.
The lettering was complicated ... 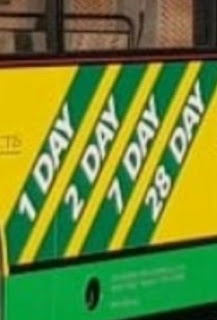 ... but well within the capabilities of Fuhrmann signs ... 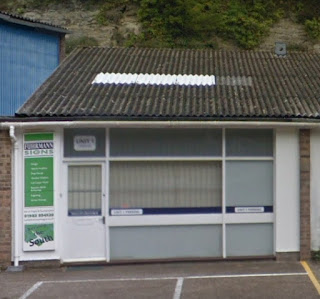 ... based in the old station yard at Ventnor. But what about the Rover logo?

Particularly challenging would be the graded faded dotty bits in the rotatimg rover arrows. as nobody had a copy of the file (the original was created on a clockwork driven Apple Mac computer) fbb was asked if he could make a copy.
Defensively, the old man said he would try his best, but could make no promises. Without going into too much detail about the old man's intellectual agony, he was able to come up with a near miss in PDF format as below.

fbb duly sent off a JPEG proof copy of the above PDF for consideration, comment and correction - again with the warning the anything better might be beyond the old codger's artistic proclivities.

There then followed a deafening silence.
Oh, well, thought your elderly graphics bodger, they obviously didn't like it and have gone to the professionals. But then came back a report that, yes, they did like it and, yes, they would be using it and it had already gone off to Ventnor station yard!
fbb was surprised. You would normally use the PDF for turning into a proper graphic, as a PDF is fully scaleable and can be edited if tweaks are required.
fbb was just a little disappointed to see the bus resplendent it its garish livery but with a simplified rover logo. 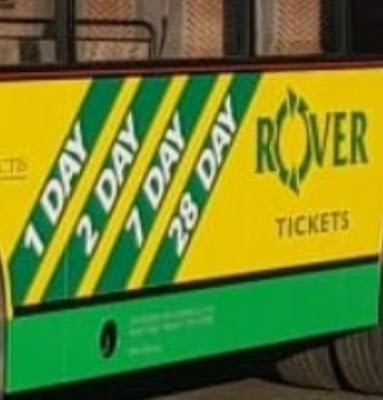 No dotty bits!
Apart from the logo, the bus looks great - if you like that sort of thing. It will certainly brighten up the rather gloomy first impression of the museum's main gallery.
In case you wondered, the Museum did not open in 2020 and when (if) it will start up in 2021 is another DV matter.
But it is well worth a visit and FREE! (Donations accepted, naturally.) 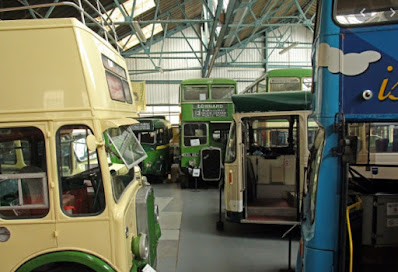 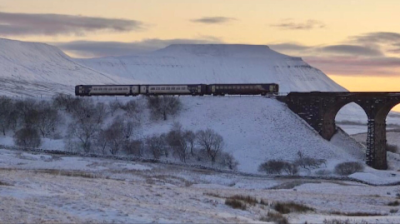 A twitterer has posted three pictures from his official exercide in the environs of Ribblehead Viaduct. Above is a train trundling past, next, the northern bit ... 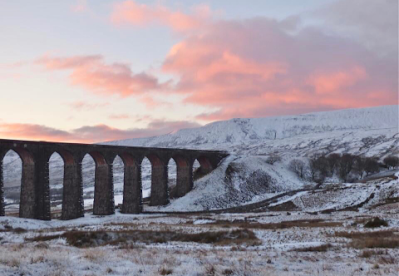 ... c/w with picturesque sky. From further back we experience the complete magnificence.

Under a looming leaden sky, a giant cat terrorises the driver (and presumably the passengers) as their train approaches Blea Moor Tunnel.
Maybe not!!
And Why We Liked Steam! 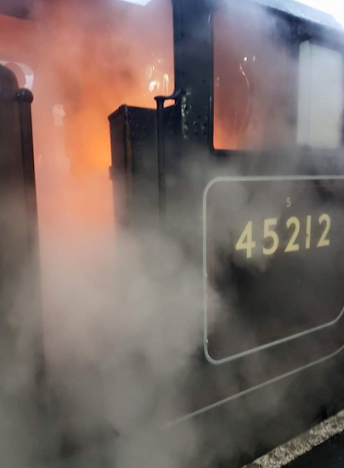 fbb knows fully well that kettles were dirty, smelly, slow and inefficient; BUT ...
... there was something VERY special about seeing them in action.
Tomorrow we go to Paris and Berlin.
How They Do It In The EU blog : Monday 11th January
Posted by fatbusbloke at 02:00