Maps In Profusion; Buses As Well! 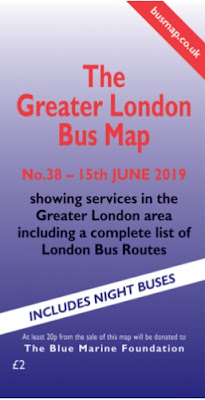 Currently, the only London bus map available is that produced by Mike Harris. It is in the style of the former London Transport version that we all know and loved. Things are slightly different in Paris. The central part of the city offers both a diagram (good) and a geographical (a bit cluttered in the middle - needa careful usage by beginners!). The geographical map also doubles as a street map.

There is also a central area bus diagram. 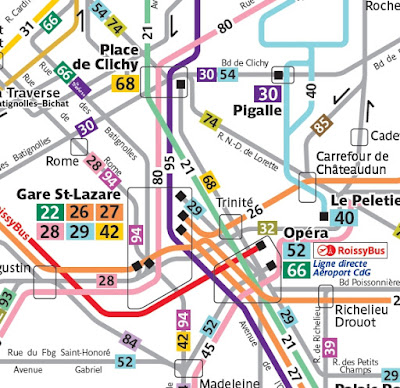 This is poor and probably undecipherable by the average visitor! It does, oddly, include the trams, but only those that operate within the city area. 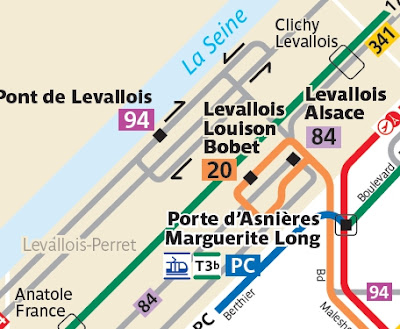 Identification of some of the branded services can be a challenge to the eyeballs. 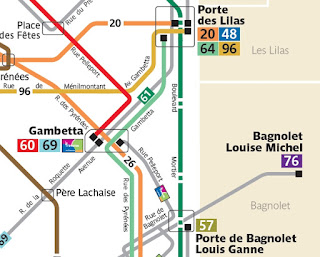 The multicoloured splodge is actually this ... 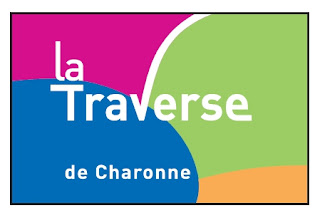 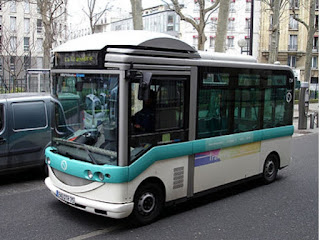 ... of which one is operated by a very un-French sounding company ... 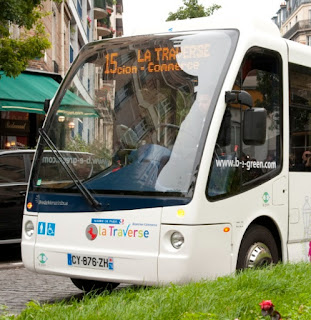 ... B E Green!
But there is another bs map, cunningly well hidden in part of the web site headed ...

... Sector Maps. Included in the list is one for  "Bus Paris avec rues" and what a joy it is. 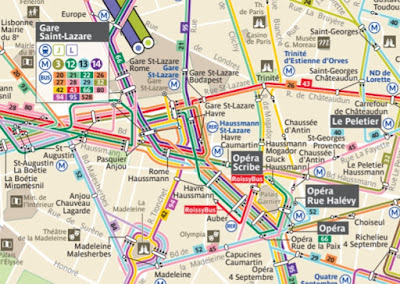 Still a bit scary in some places, it shows every bus route colour coded (click on the map to enlarge), PLUS ... 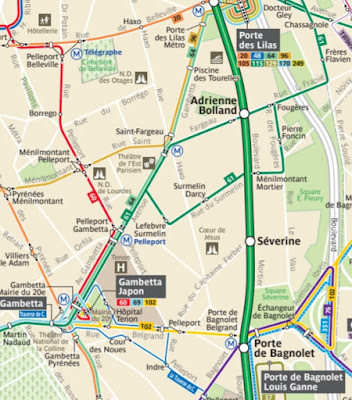 ... trams within the central area - effectively the 3a and 3b (broad GREEN above) that used to be "Petit Ceinture" bus services. All bus stops are shown and named as are all Metro stations, although lines are not shown.
It is this sort of quality that we should expect from London. When fbb last visited Paris, he successfully negotiated bus route 87 from Bercy along the banks of the Seine to Gare St Lazare and back along the other bank for a bit of sightseeing, and route 42 from Gare du Nord back to his Hotel near Dupleix Metro station. It was all delightfully easy, although some skill was needed to match stops to streets in reality, a confusion caused only by fbb's inability to remember that buses drive on the right!!!
In April 2019, Paris had a big-bang re-organisation of its city bus services, and both the routes used by fbb changed, so those through journeys would not be quite so straightforward - but plenty of others look interesting.
fbb's 87 now runs only along one bank of the river and terminates at Invalides ... 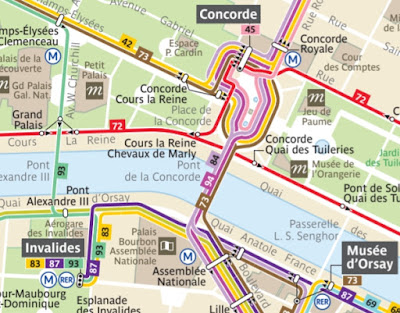 ... but, if he nipped across the Pont de la Concorde, he could catch a 73 back the other way. Seemples with this excellent map! Likewise the 42 would still get him to his hotel on Rue Fondary ... 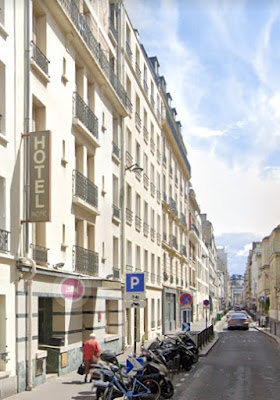 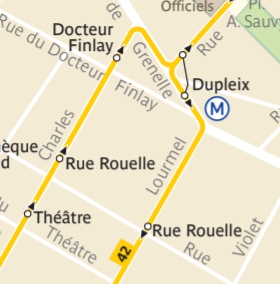 ... but the ride would be shorter, running only from Gare St Lazare. But the gaff is close to Metro Dupleix, which is on one the overhead sections and thus equally splendid. 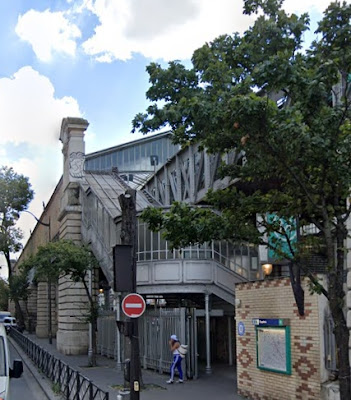 But the other secor maps go one step further. 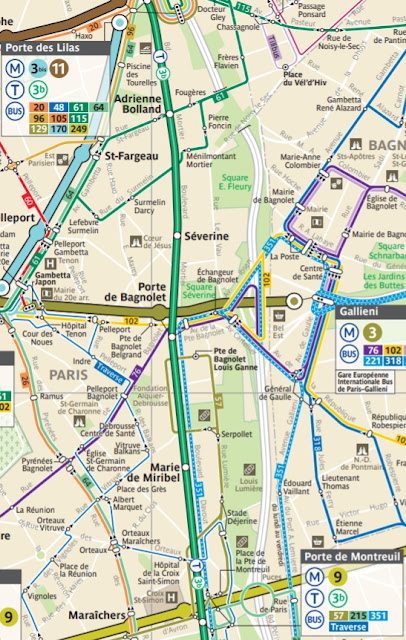 Readers with a photographic memory may spot Porte de Monreuil (bottom centre) from yesterday's blog. You also get RER (E PURPLE and A RED) and suburban rail (lettered routes - P GOLD) as well. 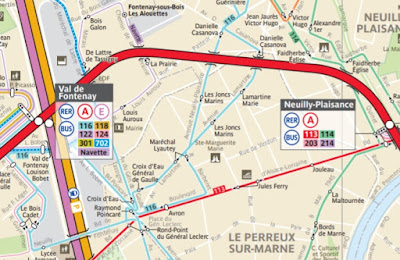 Again, this is what London needs.
As someone once said, maps of this quality would be all about "Creating Desire", far more so than just painting the buses in snazzy colours.
But there is one more map to explore ...
See ya tomorrow!
Tank Wagon Anniversary : 35 Years

In 1976, Airfix introduced a range of model railway stock later rebranded as Great Model Railway. The marketing people reckoned that modellers might think they were buying Airfix kits, rather than high quality finished models, hence the change of emphasis from Airfix.
Incidentallythe Airfix name had nothing to do with "Fix"ing "Air"craft kits. The firm started in 1939 and its first injection moulded (plastic) product appeared in 1947. It was a comb! The first kit [produced was for a Ferguson tractor. 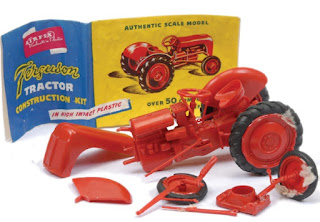 Airfix was chosen, as ever, to keep the company name at the head of trade catalogues.
Also in 1976 Palitoy introduced their Mainline range.
In 1981 Airfix went bust and the railway models were taken over by Mainline.
In 1983 Palitoy closed down the Mainline business to concentrate on more profitable "toy" products.
Eventually, some of the moulds for the wagons found their way into the hands of Dapol. Dpol never made this particular tank wagon.
1n 1996 Dapol sold a batch of unwanted moulds to Hornby. 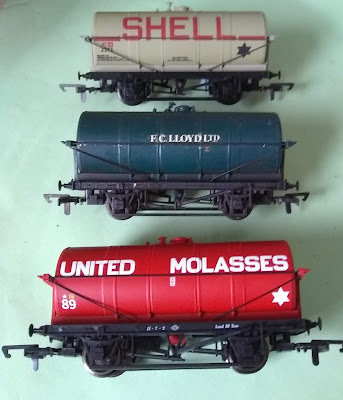 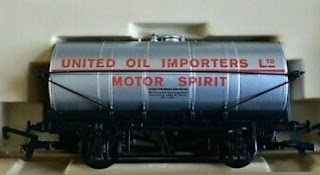 They are identical models produced using the 35 year old Airfix moulds.
Confusing isn't it?
But you would make more money from ould molds without the huge expense of designing and making new ones.
Internet Failure
After weeks of dodgy signals (due to noise on the line, apparently) the Internet died yesterday afternoon. fbb modestly finished off this work of epistolary genius via a "tether" to his mobile phone. But it gets very expensive, so apologies if quality is diminished. Ther internet returned just before "Death in Paradise".
Next Perfection in Paris blpg : Saturday 23rd January
Posted by fatbusbloke at 02:00