Power To The People - In Brighton! 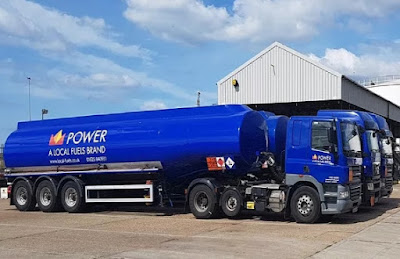 Local Fuel Plc (or is it "Local Fuels" does not trip off the tongue as a national brand of petrol; because it isn't! 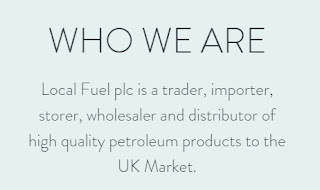 Most of their retail petrol stations are in the Sussex area ... 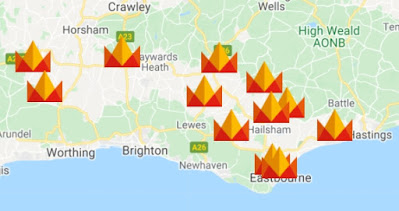 ... but they have a bright and zappy image. 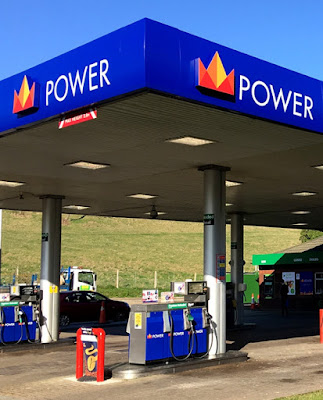 But they do not have tank wagons! For that we need to go back a bit.

The oil industry was first established on the Isle of Grain in 1908 when, in association with the naval dockyard at Sheerness, the Admiralty constructed an oil storage and ship refuelling depot on the Medway. In 1923 the Medway Oil and Storage Company (MOSCO) constructed an oil refinery and tank farm adjacent to the Admiralty site. MOSCO was absorbed into the Anglo-Persian Oil Company (APOC) in 1932 after which oil refining at Grain ceased. (APOC was renamed the Anglo-Iranian Oil Company in 1935, then British Petroleum Company in 1954).

MOSCO's petrol, from oil bought from Russian - Moscow to MOSCO - was sold under the brand "Power", a brand which continued to be used even after the take-over in 1932.
Originally their logo was a stylised raised hand ... 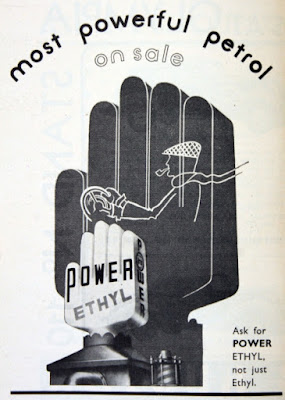 ... which was repeated on the petrol pump "globe", 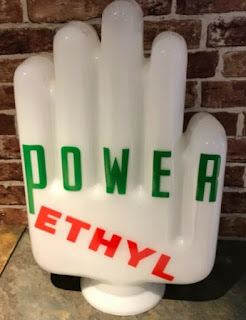 Apparently, they are always called "globes" although designs were often far from  being "globular". Note, too, no mention in those far-off days of "petrol", just "Ethyl".
Ethyl?
Tetraethyl lead, abbreviated TEL, is an organolead compound with the formula (CH3CH2)4Pb. It is a petro-fuel additive, first being mixed with gasoline beginning in the 1920s as a patented octane rating booster that allowed engine compression to be raised substantially. This in turn caused increased vehicle performance and fuel economy. TEL had been identified chemically in the mid-19th century, but its antiknock effectiveness was discovered in 1921 by the General Motors research laboratory, which had spent several years attempting to find an additive that was both highly effective and inexpensive.
But toxic! Back in the happy halcyon days when Diesel was good and petrol was bad, one of its badnesses was that it pumped lead into the atmosphere! Lead is no longer added to petrol!
The hand logo was eventually replaced with a simple rhomboid "globe" ... 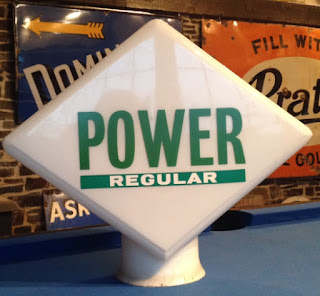 ... and the green pumps became fairly well known along the highways and byways of this sceptred isle ...

... as did green tanker lorries. These distinctive vehicles seem only to be remembered in model form.

Who remembers the original "Vanguard" die cast models?
Launched in 1996, by Jack Odell and his company, Lledo, (Lledo is Odell spelled backwards) Vanguards is a series of die-cast 1:43 (and 1:64 commercial) scale model vehicles designed for the adult collector spanning half a century of motoring in Britain. Originally sometimes called the "Fifties and Sixties Classic Collection" and with the motto 'Setting the standard'. They were first produced from 1996-1999 under the ownership of Lledo, with the first model being the VA1000 Navy Blue Ford Anglia 105E. Since 2008, Vanguards have been produced under the ownership of Hornby PLC. 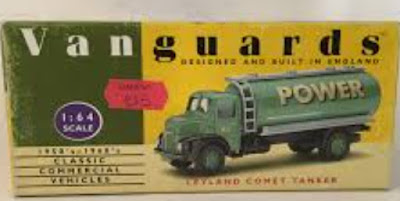 The brand persists, used by Corgi (a k a Hornby!) for its larger model cars.

Every Vanguards model is presented in a plastic display case and comes complete with an individually numbered limited edition certificate of authenticity. This collectable series of cars represents various areas of motoring including: Police cars, standard road cars, commercial and motor sport vehicles.
But let's go back to the 1930s.
When Hornby Dublo got going in 1938, their range included at least three different liveries of tank wagon. They were chosen more for their bright colours than for prototypical accuracy. 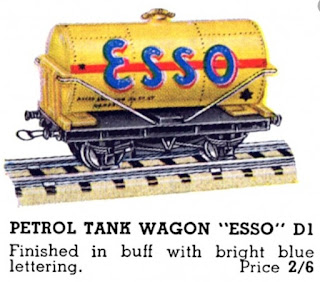 One appeared in the official Esso livery for tankers carrying petrol, a bright buff with distinctive red stripe.  This was a reasonably accurate portrayal of the real thing unlike Hornby's next offering! 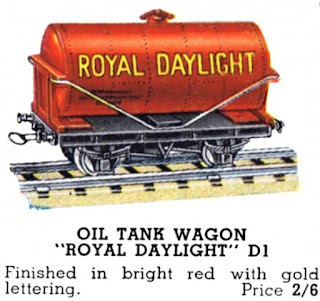 Royal Daylight was a lighting and heating brand of Pratts Fuel (i.e.paraffin)but the livery was never bright red with yellow lettering, but a terra cotta pinkish tinge with white lettering. 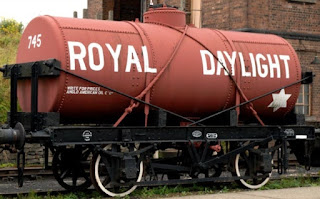 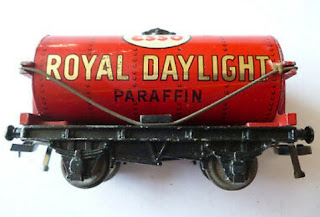 Wagons with JUST Royal Daylight on the side are rare, and therefore expensive.
Then there was a Power Ethyl wagon in Green. 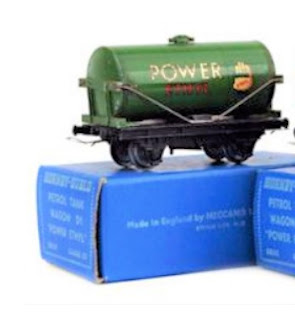 The "ethyl plus hand" design may have lasted into the immediate post-war period when Peco style couplings became standard, but the "Ethyl" tank wagons are still rare and thus still expensive! 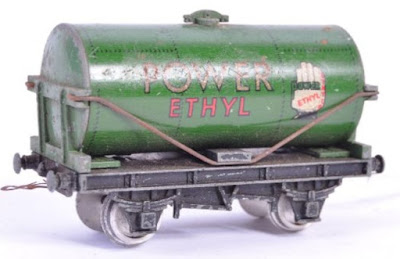 ... which doesn't sound too bad until you add the auction fees of at least 20% plus VAT which takes the price up to nearly £120.
Other post-war versions of the pre-war body design are, likewise, pricey ... 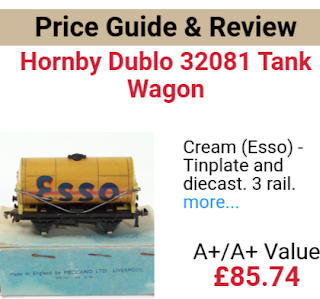 ... and finding any design with pre-war couplings ... 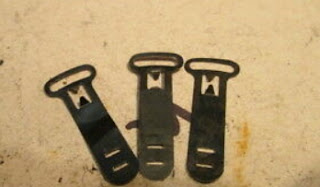 ... as in the earlier illustrations above, is a huge challenge with limited chances of success but with a less-limited chance of bankruptcy!
Following the simplification of the Power logo, Hornby responded by changing their post-war design to a logo-less green body but with "petrol" replacing "ethyl". 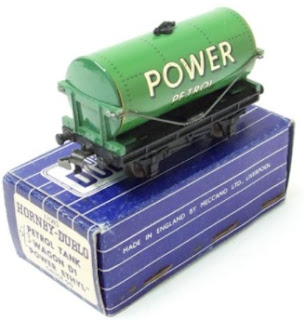 These are much cheaper, depending on condition and whether they have a box. fbb's cost £6 (plus postage), is in tatty condition, but it is just what the old man wanted. 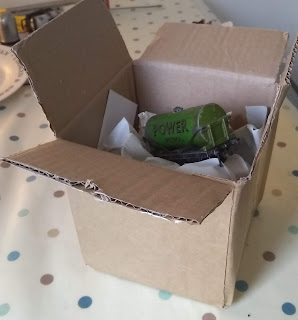 But why, our eager reader may be asking, does fbb want another old Hornby Dublo tank wagon for his collection; surely he has got one already; there are plenty about?

Tomorrow and Sunday, fbb will reveal all, as part of his usual weekend variety blogs
It was a near disaster!
For The Record 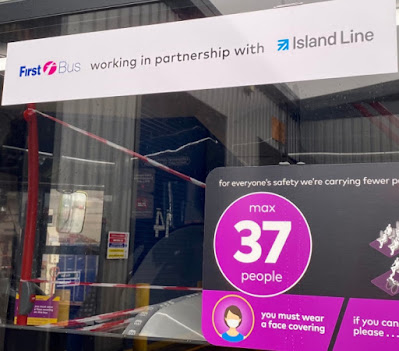 Six Bristol buses have transferred to the Isle of Wight to run the replacement bus service in operation while the track is relaid for the new trains. Our senior Island Correspondent says that generally they are carrying very few passengers.
One reason is that the Portsmouth to Ryde Pier Head boat service is suspended during Lockdown Mark 2 - so there are no passengers from the nearby island.