Near Perfection in Paris? 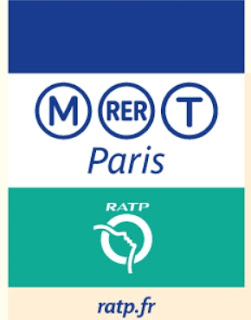 Hopefully, we have seen that the "standard" Paris "Metro" map is a bit better than just Metro. It gives complete maps of the Metro network, made a little easier than in London because most lines only dig a quite shallow route outside the "traditional" city boundary. 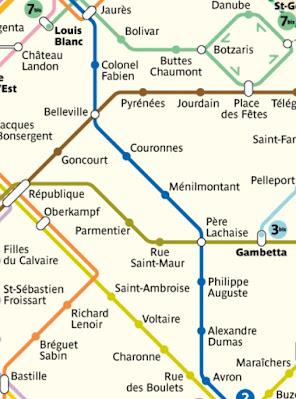 Some lines do go outside of geographical realism, they are still included, as on the London Tube map. 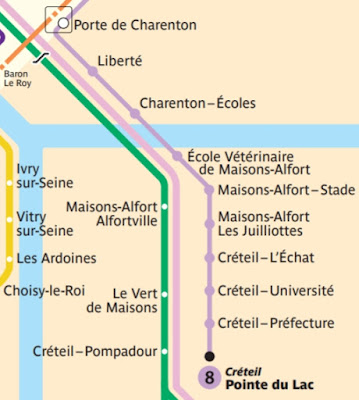 It is actually about 7 miles from Porte de Cheranton to Creteil Pointe du Lac, about as far as across the whole city boundary. On the geographically accurate map of the central area, lines like the 8 are shown in a white box; so we can guess they lose accuracy over that section. 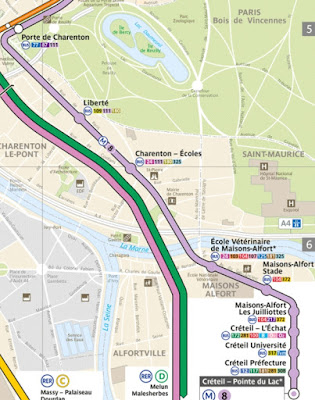 Pointe du Lac does what it says on the tin, by the way; it is a terminus near the pointy southern end of the lake ... 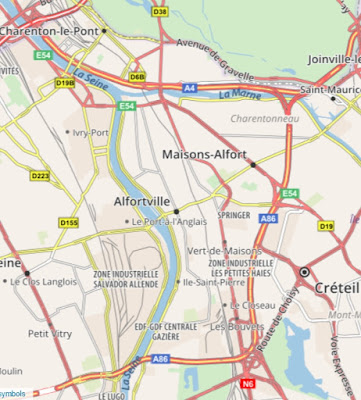 ... seen bottom right in the road map above (which doesn't show Metro lines at that scale).
The "Lac" at Creteil is quite picture-skew in an urban sort of way ... 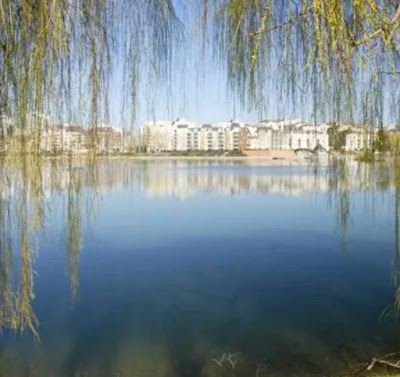 ... and is called, with Gallic ingenuity, "Le Lac De Creteil".
fbb has actually been to the terminus of Metro line 8. 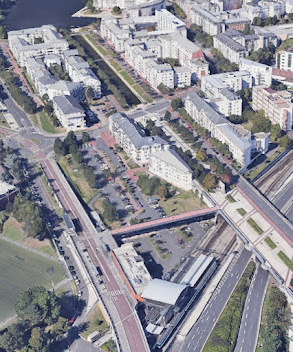 It is not the most exciting station! 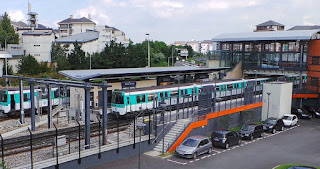 But, as we saw yesterday, both styles of map seem to work well by including trams, RER and rail lines as well as just Metro. Compared with London's revised Tube map, it is much much better except perhaps in the middle.
The ultimate test of any public transport map must surely be the complex station at Chatelet Les Halles. Les Halles (the sheds!) was Paris' fruit and veg wholesale market (as in Covent Garden, London) ... 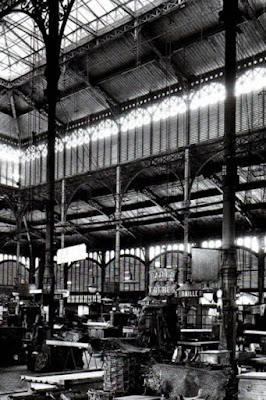 ... but is now a swizzo shopping centre. There isn't time and space to go into the history of the interchanges here in detail, but a list will be a good guide. 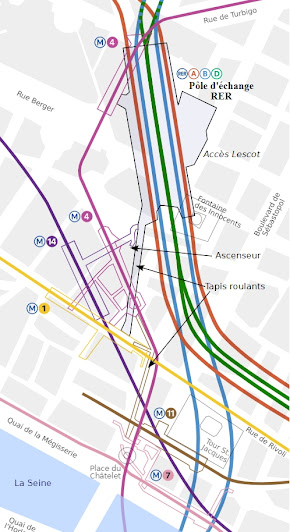 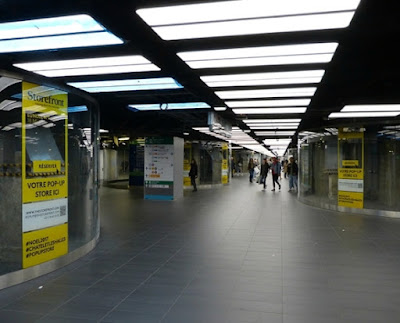 The complex is massive, full of tunnels, well labelled but terrifying. 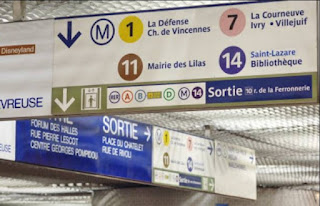 When fbb was last there he did not see any station guides with St Bernard dogs and brandy barrels ... 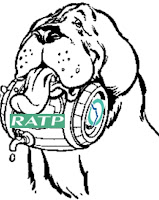 ...  but you need strength and resilience to cope with the trauma of your first few interchanges there. Realistically it is all far too complex for an innocent newcomer, and certainly horrific on the geographical version ... 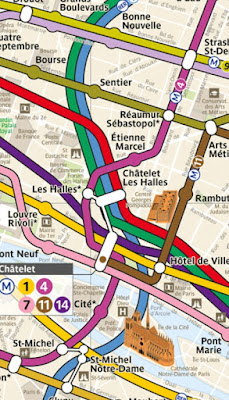 ... but much better on the more popular diagram. 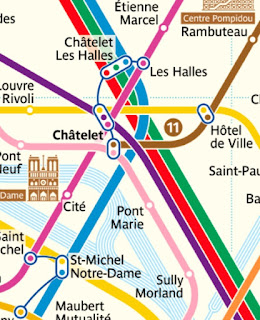 In recent years Chatelet Les Halles has gained a massive shopping centre where the sheds used to be ... 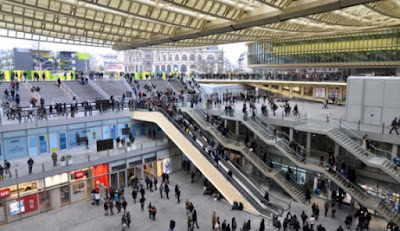 ... and, somewhere in the depths of shopping Hades, you will find the entrance to the station. 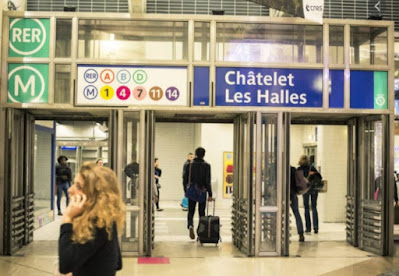 Definitely NOT for the faint hearted!
The complex knitting that forms the crowded centre of the Metro/RER/Tram diagram will always be a challenge, but, allowing for the constraints of its innate interwovenness, the folks at RATP have done a good job.
Of course, we are only looking at a small-ish city area, that circle of seven miles diameter.
How does RATP deal with what happens outside, with stuff that leaves the well-defined Metro area?

That calls for a second map. 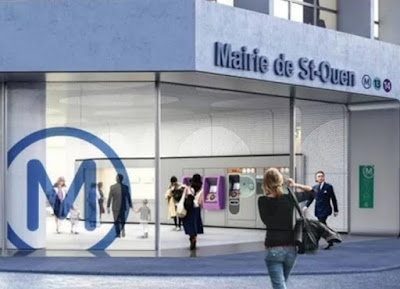 For the record, fbb should mentions that the extension of Metro 14 to the north opened in December 2020 and it is shown correctly on the map. 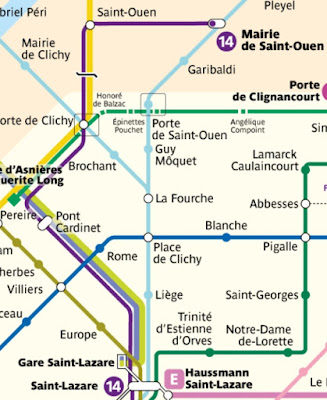 There is a bit more beyond St Ouen to come on line 14. The current map also shows the two station extension to line 4 ... 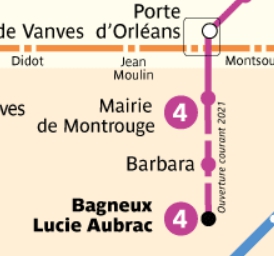 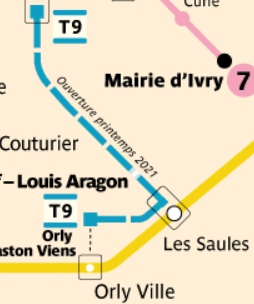 ... both of which are anticipated this year. Pretty much, Tram 9 whizzes down the main road to Orly (the town, NOT the airport - already served by Tram 7 and due Metro 14'ssoutyhern extension - eventually). 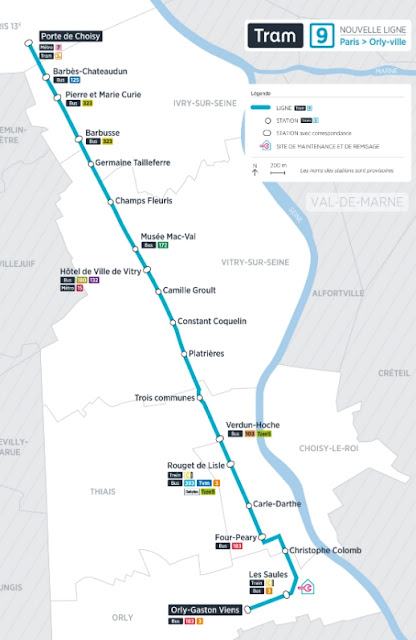 The Parisians seem to cope well with the massive disruption, seeing the chaos ... 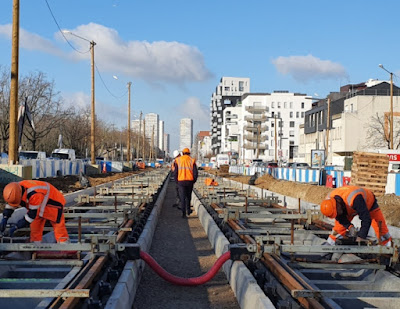 At Bagneux it will connect with a completely new Metro 15 ... 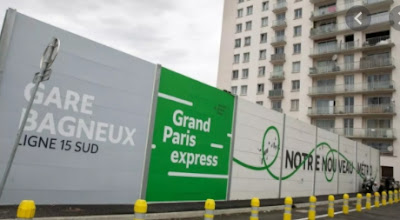 But that is another story.
For now, back to the key question; Is it "Perfection in Paris?

The "core" Metro diagram is a very good attempt to do the impossible - namely to convey the complexity of rail transport within the city area of Paris.

Perhaps the new London Tube map should just concentrate on the area within the Overground "circle" route, the area most used by tourists and thus the area where a good and comprehensive map is needed. The map could then be bigger and extra detail could be fitted in.

As in Paris, the wider network needs something different.

Telling The Truth About Tank Wagons

There is the possibility, remote though it be, that a few of our loyal blog readers may not be fully cognisant of the subtle differences that mark out various batches of real, full-sized tank wagons that have run on Britain's railway system.

Thus there is the even greater possibility that readers of this blog might not fully appreciate the astounding complexity of its author's research into OO gauge model tank wagons and the accumulation of approximately 65 different varieties dating from 1936 to 2021.

Clearly fbb needs to help his readers with the technical stuff.

To this end Mrs fbb has bought the old man a book for his forthcoming birthday. (OK, fbb ordered it for himself on Mrs fbb's Amazon account.) 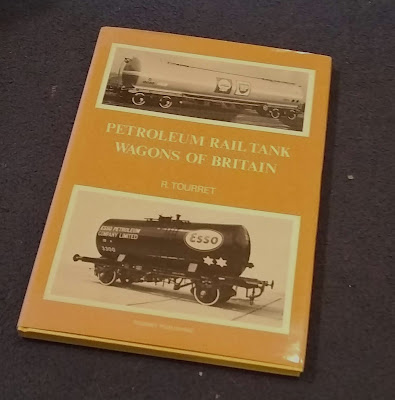 Petroleum Rail Tank Wagons Of Britain is, of course, the seminal work on the matter. How could we ever forget?

The parcel arrived yesterday and already fbb can tell you with utter confidence that there are THREE distinctly different ways in which a large cylindrical tank of petrol can be attached to a railway wagon chassis. The three technologies use the following "devices":- 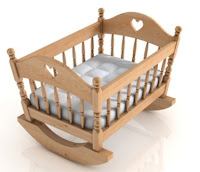 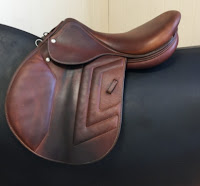 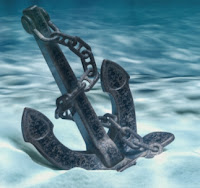 All your aged blogger has to do now is to work out which is which. Ah, the challenges faced by an elderly investigative enthusiast!