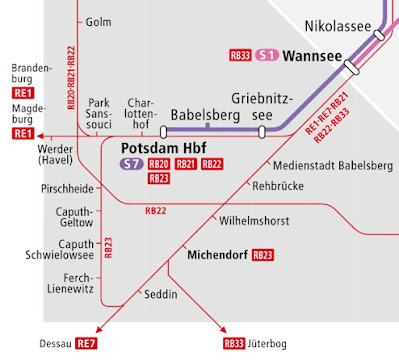 fbb can remember nothing of his rail trip to Potsdam, taken whilst waiting for a late evening flight back to Blighty, except that there was some form of hold up and his return train to Zoo was delayed. But after being rather underwhelmed by U-Bahn information in yesterday's blog, his reaction was exactly opposite when exploring the S-Bahn web site.
Wannsee (upper right) is an important interchange between the S-Bahn and Regional DB trains. It is also home to the terminus of S1 and on the way to Potsdam with S7.
So here is Wannsee station, courtesy of Google Earth with See upper left.

Spin the map round and you can see the elegant station building ... 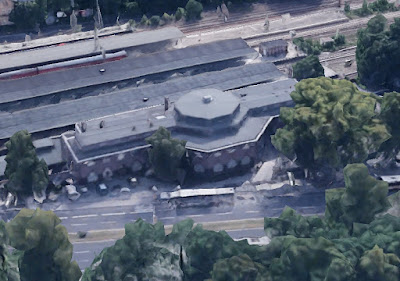 ... which is all still in use including a pub/restaurant. 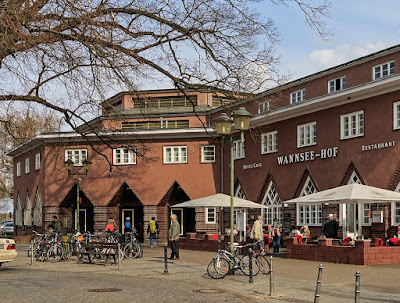 Buses stop outside, of course, and there is a well lit clean subway to stops on the opposite side of the road. 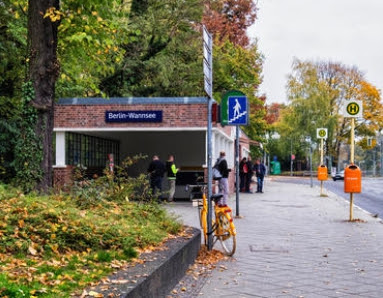 The station itself is kept very clean and tidy ... 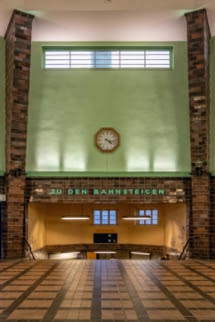 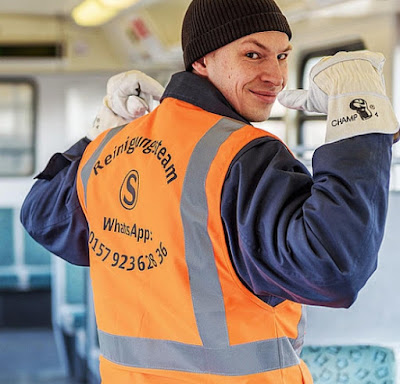 Hans is part of the Reinigunsteam and can be contacted via "WhatsApp". [It is part of what the young people call "social media" m'lud and you send messages on the app via your mobile phone.]
Trust us anytime with the dirty things:
Send us a WhatsApp message to the following number: 0157 923 628 36.
Please specify your message with the name of the train station and your current position or the train vehicle number (see photos below). A photo will help us to locate the grime more efficiently.
You will then receive a confirmation that your message has been forwarded to our cleaning team.
Upon request, you will receive further information after elimination of the trash or grime you have reported.
Finally, we would be pleased if you rate our services. Your opinion matters to us.
Try doing this is London!
Now let's look at the web site to find information about the train services.

fbb must admit that he sighed a sad old sigh when he saw the heading "Plan a Journey". Did this mean that all that was on offer was a journey planner?
No, it didn't. 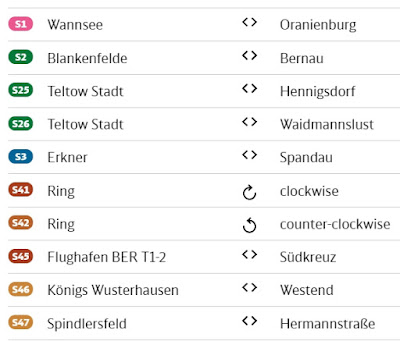 The first information on offer is a simple colour coded list of lines. Initially, the old man was going to complain that the services were not in numerical order, but on closer inspection it would appear that  S2  is closely associated with  S25  and  S26  (all GREEN) and this is, indeed, confirmed by the route diagram. 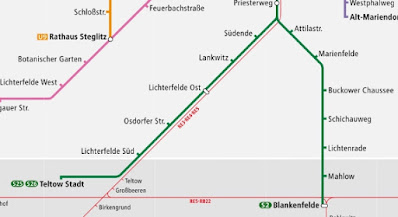 25s and 26s also do different things in the north of the City, but come together over the busy central section; so the listing does make sense.
Click on a route and you get a wodge of information about each station ... 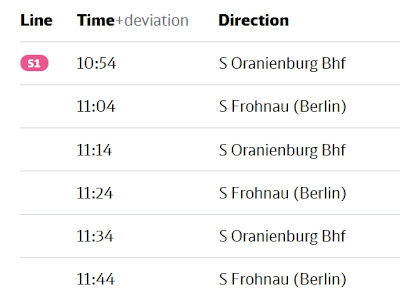 But not so fast, fbb. Look at the tabs at the top of the page.

On seeing this, fbb felt potentially like sacrificing 100 bullocks and dancing all the way from fbb mansions to Tesco, such was his joy, glee and excitement.
And there, in all its glory was a PDF timetable for S-Bahn line 1 (extract below). 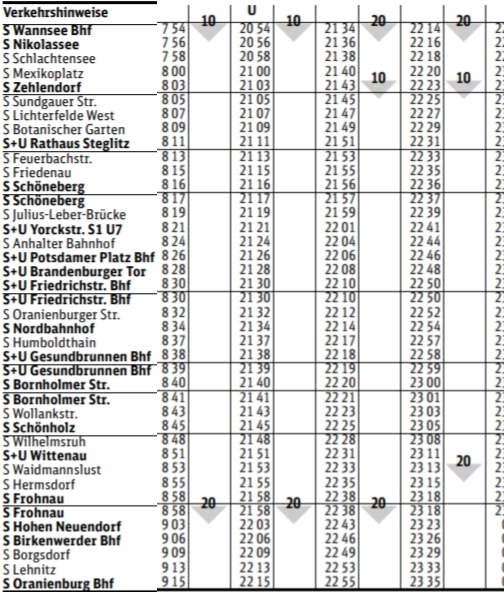 fbb particularly likes the neat way of showing the pattern of service. During the day, for example, trains run every 10 minutes between Wannsee and Frohnau, continuing every 20 to Oranienburg. 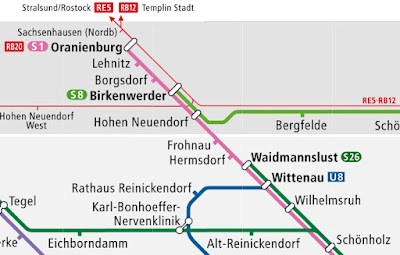 In the later evening, the 10 minute headway stops short at Waidmannslust, the terminus of route S26. There is also a text summary of the pattern of service.
Tact information
The S1 connects Berlin Wannsee to Oranienburg in Oberhavel County, Brandenburg via Zehlendorf and Schöneberg. It travels through the North-South S-Bahn tunnel and stops at Friedrichstraße via Gesundbrunnen.
The line runs every 20 minutes to Oranienburg and offers passenger services between Wannsee and Frohnau at 10-minute intervals during the day. From Monday to Friday, every 20 minutes additional trains are offered during rush hours between Zehlendorf and Potsdamer Platz (trains are not available during the Christmas and summer holidays). The train runs every 30 minutes through the night on Friday and Saturday.
The translation could be a bit better but it explains everything, including the peak hour extras which do not appear in the PDF timetable. And S1 runs all night seven days a week. [Takt is untranslated by the wondrous Google except as "tact". DB introduced a new clock-face national timetable a good few years ago which was "Taktfahrplan Deutsch" which implied a German Network-wide timetable, so, Takt in this context,  means "Network"???)
In case you were wondering, there is a journey planner ...

... available on all web pages but not prioritised. The JP seems to happy with U-Bahn, S-Bahn, Bus and Regional Railways but, unlike the full DB site, doesn't do international. So, rather than a silly circuitous rail route from Wannsee to the U-Bahn terminus at Krumme Lanke ... 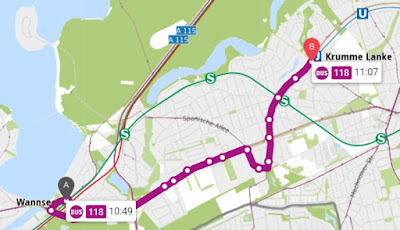 Of course U-Bahn, S-Bahn and bus have a common fares structure ... 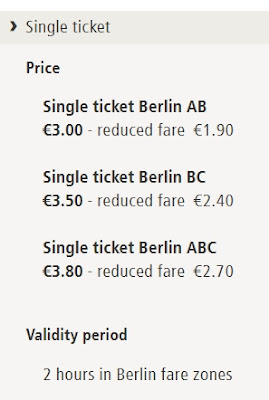 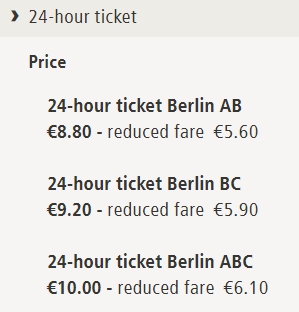 The network diagram covers both rail modes and the journey planner links everything.
Unlike in London (with one tram route), there is no attempt to include the former East Berlin tram network on the U/S-bahn diagram, just because it runs on rails. 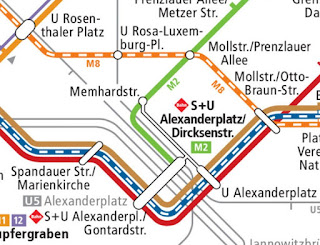 But they are all on the journey planner. 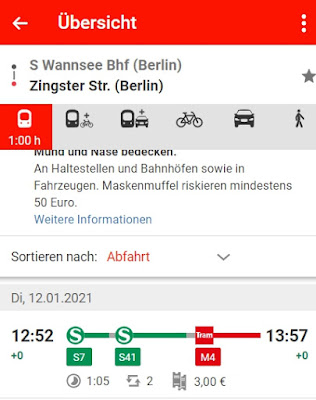 Historically and philosophically, trams are regarded as buses on rails rather than the pseudo Undergound line in Croydon. But in Berlin, most of the trams are a tad bigger than a bus. 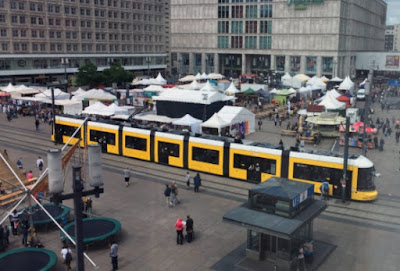 Interestingly, and maybe confusingly, "big" trams services have a prefix letter M for "Metro"!
Tomorrow, we end this mini series by looking at S-Bahn maps; and perhaps a few P.S. items.
We will also attempt to answer the question posed in the heading of these blogs, namely, is the network as presented on line "Better in Berlin"
Next Better in Berlin (?) blog : Thursday 14th January
Posted by fatbusbloke at 02:00