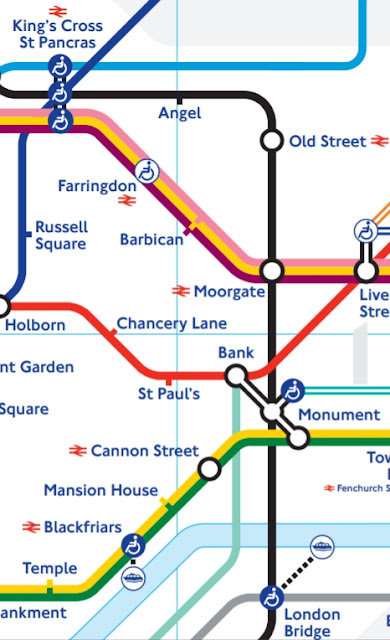 Do you wish to travel from Kings Cross to London Bridge? It is very easy. You take the Northern Line and, as it is all in Zone 1 it will cost you a whopping £4.90. This almost halves if you have an Oyster Card (etc) to a more modest £2.50.
What the "Underground" map doesn't tell you is that a frequent National Rail service links those two stations. It still seems to be called Thameslink ... 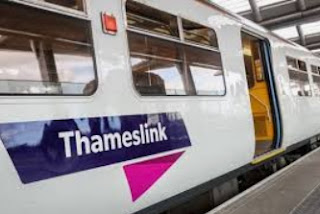 ... with one of the most weedy logo/livery combinations on the national network.
Peak fare is the same as the Northern Line, but off-peak it is a much more acceptable £3.30 reducing to £2.15 with a railcard.
As most Oyster owners haven't a clue what they are paying, fbb cannot say with any authority whether the difference is even available with the Super City Shellfish.
So there has been pressure for a long time to include the line on the "traditional" Underground map.
And so, in a blaze pf PR self-adulation, London Underground announced its arrival on the map with a launch and a press release in mid-December. The press reported it, enthusiasts made videos about it and the Great Roger French wrote a blog about it.
Except it did not appear! Copies were "pinned" to the press release for a select few but nothing changed on-line and no paper copies appeared; and, as far as fbb knows, they still haven't
But you resourceful author is made of sterner stuff and managed to obtain an on-line copy from another blogger, not one of the chosen few, who had obtained it via a man he met in a pub round the back of one of the more obscure Underground stations. It was hidden in a copy of Metro left on a bench near St James' Park station. 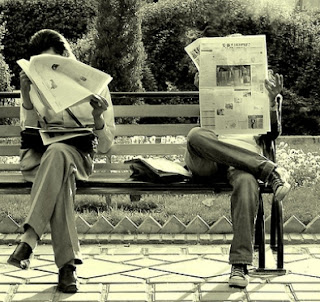 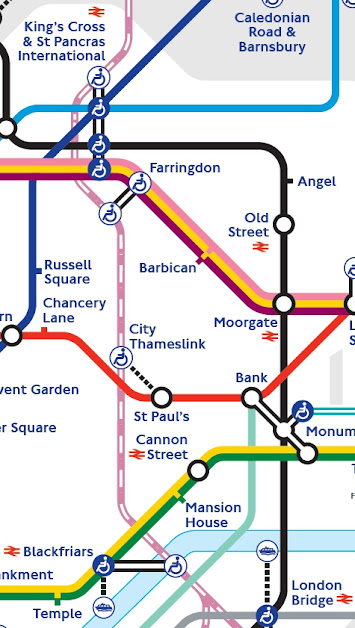 ... shown with interchanges at Faringdon and Blackfriars and a walk link from City Thameslink to St Paul's Central Line. City Thameslink has two exits/entrances; one well obscured on Holborn Viaduct ... 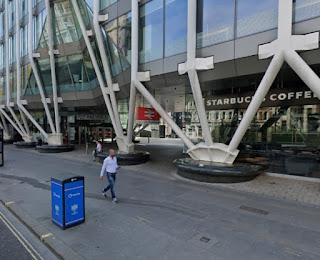 ... and the other ditto on Ludgate Hill (even more effectively obscured when Google gurgled past!) 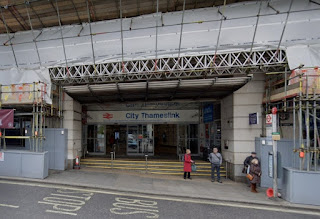 At least you can see the dominant dome from the station entrance ... 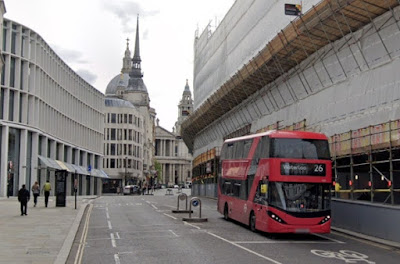 ... and all you have to do is find the Underground station. 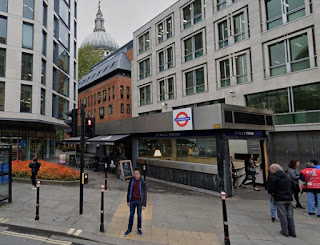 fbb used St Pauls reasonably frequently in the 70s to visit his Crusader Bible Class head office, opposite the cathedral. A snack stop was a lovely shop called Sam Widges, where "Sam" would create the most delicious sarnies as you watched, salivating profusely. 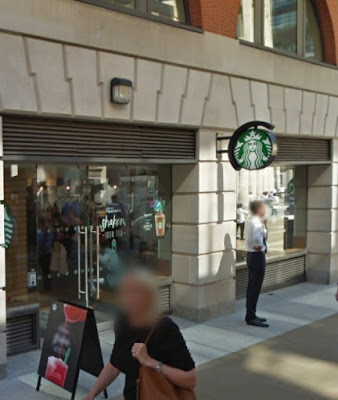 The area has been re-rebuilt since then, but Sam's Sandwich site is now a boring old Starbucks. Boo!
Pre-Thameslink, of course, the railway ran above Ludgate Hill ... 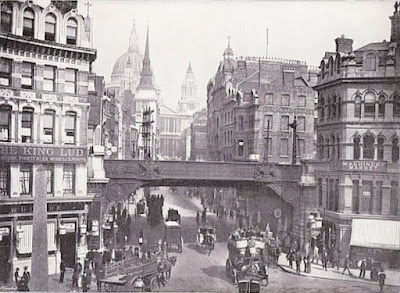 ... but now, only the King Lud building remains until your get further up the hill to the churches. 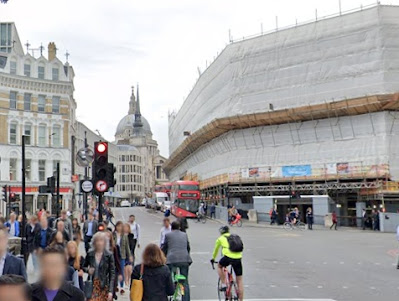 Blackfriars, of course, also now has two entrances, one on each bank of the river ... 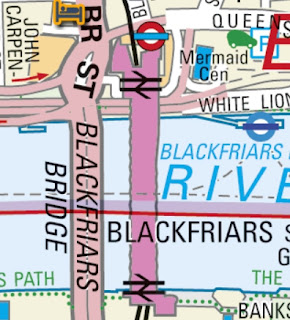 ... perhaps not well shown on the new map. 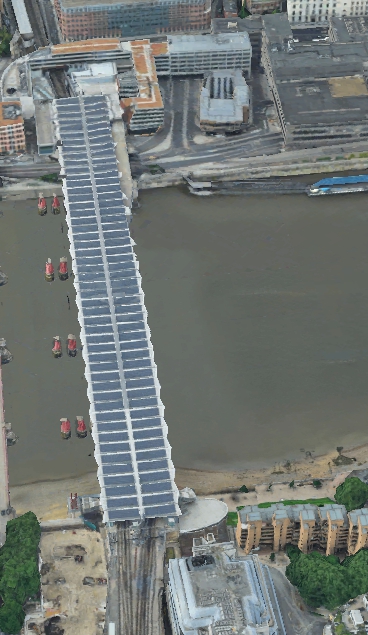 Faringdon is best left aside until interchange with the Elizabeth Line opens and Streetview and fbb both catch up! Here it is looking east in the good old days! 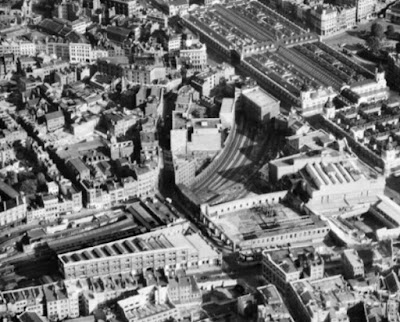 The line curving under the big block of Smithfield Market carries circle and H&C lines to Aldgate etc and once was also used by National Rail services terminating at Moorgate. Thamslink goes roughly straight across.
But the busy Thamelsink line is added to the Underground map at last. 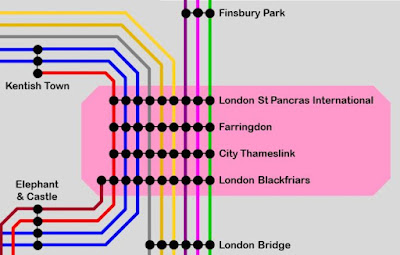 It may be super and smashing with big shiny trains, but it is very very slow, taking about 15 minutes and even, occasionally, as much as 20.

The old-style Northern Line offers just 9 mins platform to platform, but pushes that up to 23 ... 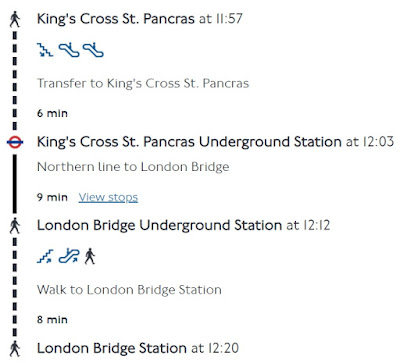 ... including escalation and expedition from and to wherever the stations are plotted by GPS. National Rail do simple station scheduled time to station scheduled time, so there is a fair hunk of rambling to add when finding your way through the labyrinthine undercrofts!
But it is there, in dashing pink, broad dashed like to full London rail systems map ... 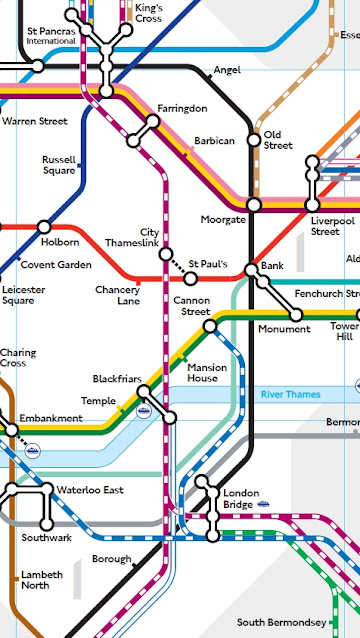 ... which includes ALL National Rail lines in a similar long-dash style.
Tomorrow we look at what else has been added to the Underground map as part of the Thameslink network.
The question to be broached is simply whether the iconic Underground map so cluttered with extras as to be devalued and no longer usefully iconic.
Next Underground map blog : Wednesday 6th January
Posted by fatbusbloke at 02:00