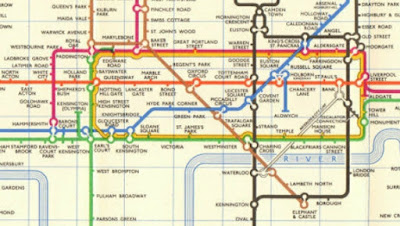 Harry Beck worked with astounding dedication on his Underground map, seeking to improve it. His over-riding aim was to help the public find their way round a complex network without grief. One of versions, unloved by many, reduced diagonals to an absolute minimum. The circle line was a rectangle as were the two bits of the |Northern Line. 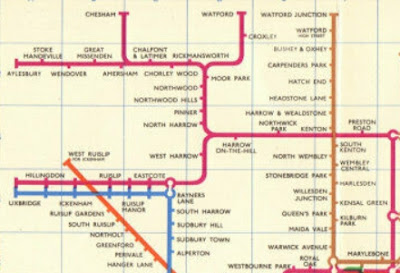 The results in North West London were, arguably, a step too far for many but at l;east he managed top get Watford and Watford Junction at a sensible distance which is more that all later versions could manage.

Here, for the record, is the geography. 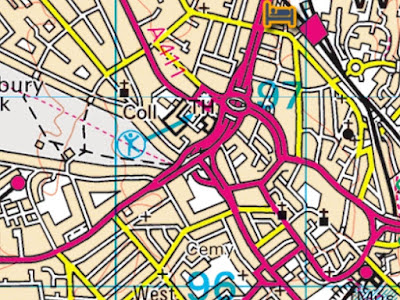 Watford (Metropolitan Line terminus) is centre left, Watford Junction upper right and Watford High Street bottom right.
In many ways, Beck was not interested in geographical accuracy, arguing that most journeys were in tunnel and most people had no sense of direction as the trains lurched and wiggled their way round a complex network.
The Midland Main Line travels pretty much North West within London with a little bit of East West soon after leaving St Pancras, 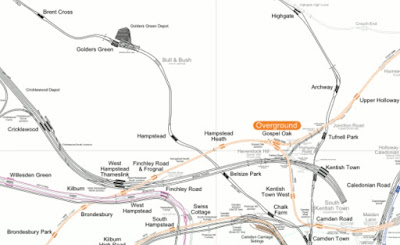 The Metropolitan and Jubilee (ex Metropolitain) lines also run broadly in the same direction with the overground sliding over and between them. 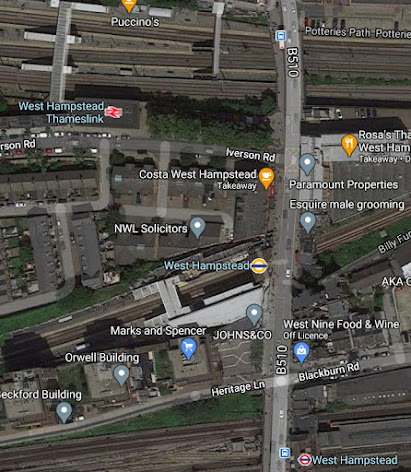 Three stations sit almost side by side along West End Lane (B510); they are named (from South to |North) West Hampstead (Jubilee) ... 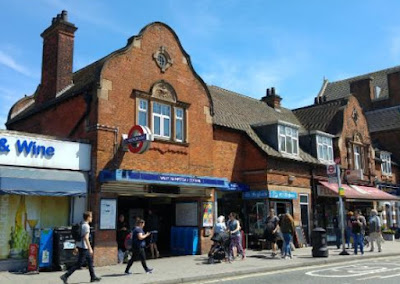 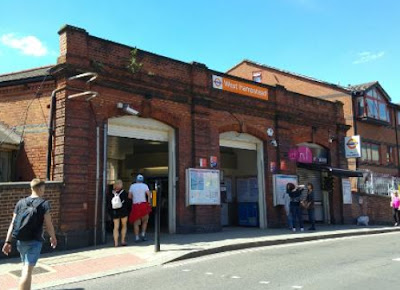 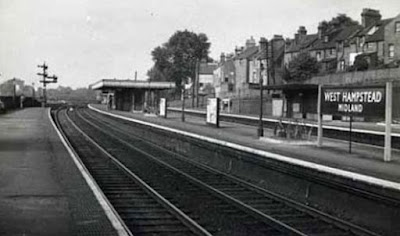 Like the other two, this station stood on West End Lane. 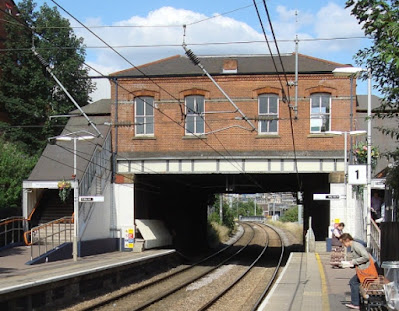 At one optimistic stage in the history of the three side-by-side stations there was a proposal to merge them into one interchange, possibly with platforms on the Chiltern Line which parallels the Metropolitan/Jubilee at this point. 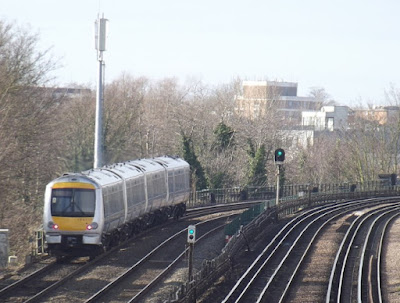 But it all fizzled out.

Chiltern Railways are proposing a redevelopment of West Hampstead, with new Chiltern & Metropolitan platforms and a direct mezzanine link between platforms.
Chiltern Railways' proposal involves rebuilding the section of West End Lane between the stations, as a tree-lined boulevard with large pavements and a bus/taxi lane. Below this there would be a walkway linking the three stations, including new platforms to be constructed on the Chiltern line approaches to Marylebone.
The redevelopment would involve demolishing the existing buildings and rebuilding them as a structure spanning the railway lines, which would become subsurface. A five-storey development of housing and offices would be required to pay for the reconstruction, which would be entirely from private funds.
The plans for the redevelopment underwent public consultation between March and April 2004.
Instead West Hamstead Midland (now |Thameslink) got a new station on Iverson Road (just off West End Lane) ... 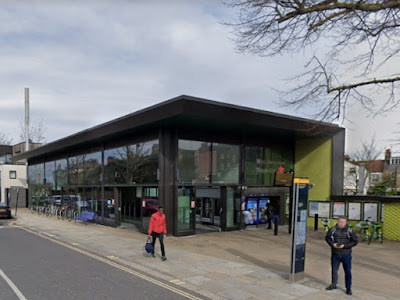 ... and the Overground station also got a new building. 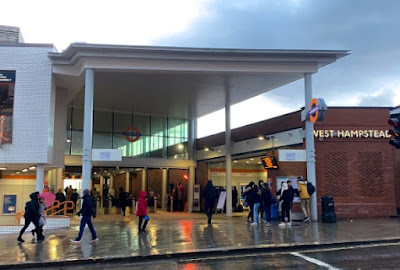 Thus there is no chance of the mega interchange plan ever being resurrected. Pity.
fbb once met up with his future Mrs outside West End Lane Station. He was very excited ... 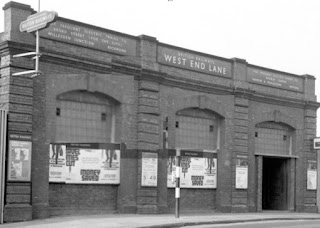 ... to visit the station - such a splendid and welcoming example of railway architecture. The trains were stunning as well. 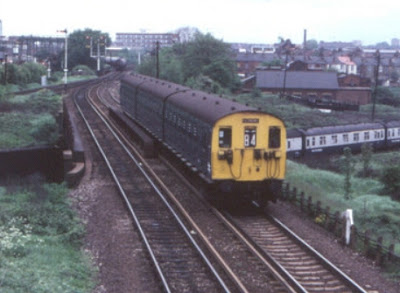 The new Undergound map struggles to show the Thameslink line as simply as it is in actuality ... 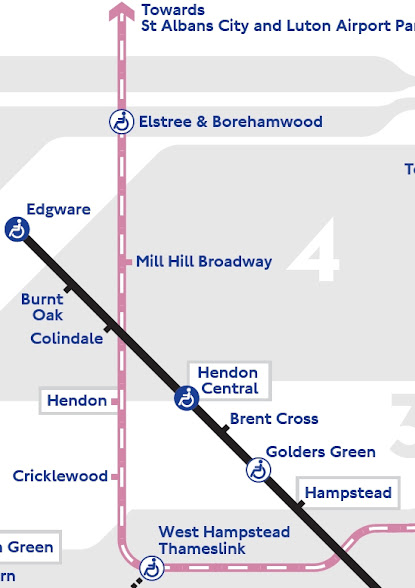 ... but it is a reasonable effort. 5/10 for the cartographers. But this map did not appear in public, as fbb reported yesterday. But as fbb set fingers to keyboard, the newbie popped into the public domain.
But it was very different in detail. 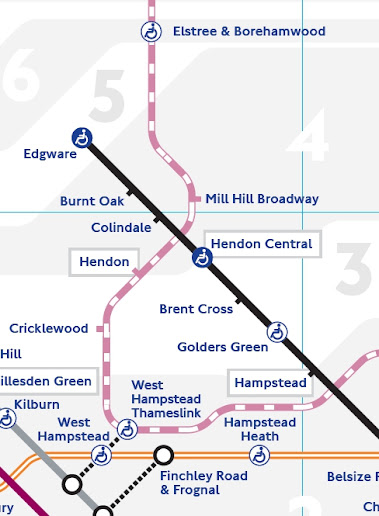 Suddenly it has gained extra wiggles for no apparent reason. The wiggles add very little to the first version although they do move West Hamstead Thameslink a little closer to West Hampstead Overground. Here is the first version ... 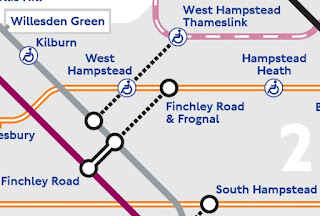 Maybe, you might think, someone has decided that interchanges, be that between close by separate stations or within station complexes should be close together?
But then look at the Thameslink routes that formerly ran from the original Kings Cross (Main Line) Station,
Here is version 1 ... 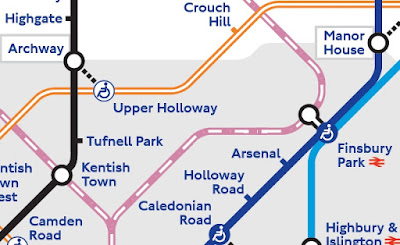 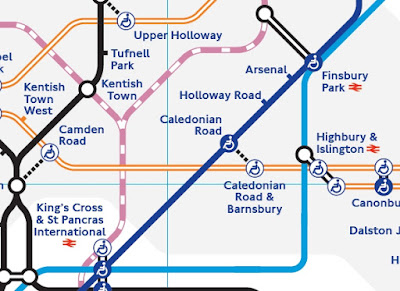 ... with oodles of unnecessary apartyness.
And what about Faringdon. Version 1 ... 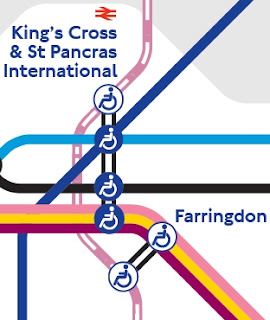 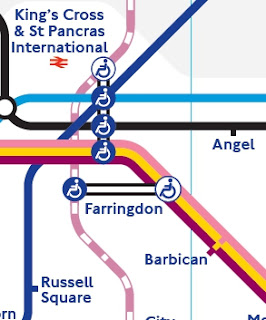 ... much further apart. So apparent length of interchange route is not the reason. Maybe someone is thinking about fitting in the Elizabeth Line at Faringdon but that is another one of these! 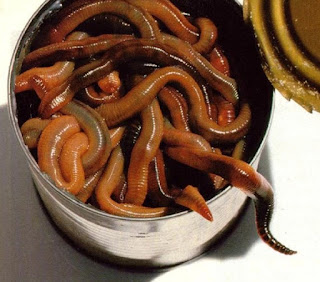 Like all cans of worms, a clear-out of the can can be arranged! 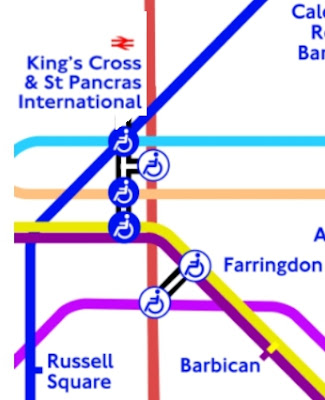 And at least one wiggle is straightened. Likewise an unnecessary wiggle at Hampstead can be straightened quite easily.

Sorry about the change of colour for Thameslink and Goblin, but a solid line is easier to edit quickly; and mid-brown conflicts less with the two purples. But more cans of opisthopora need dealing with there as well. fbb's Bakerloo has been made a shade or two darker.
In a sense, Thameslink is easy to visualise and easy to integrate in the North of the city; there are just two simple branch lines. But move south and problems proliferate with this cartographic "improvement".
Certainly Harry Beck would be aghast that the mess that now characterises what was once his simple map.
If the original "new" map was awarded 5/10, the revised "new" map is already down to 3/10.
Next Underground Map blog : Thursday 7th January
Posted by fatbusbloke at 02:00