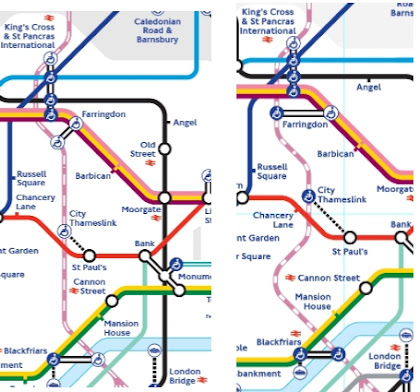 London Underground proudly announced that Thameslink was now back on their map. The version distributed to the Great and Good (and thus not to fbb!) did the job commendably well (above left); but the version that eventually appeared was far less satisfactory (above right).

But the return of an expanded Thameslink makes a nonsense of the designation "Tube Map" as ... 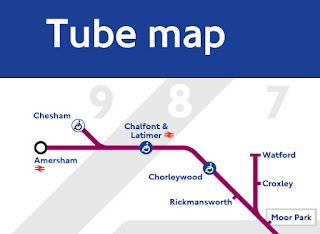 ... this once iconic publications now includes:- 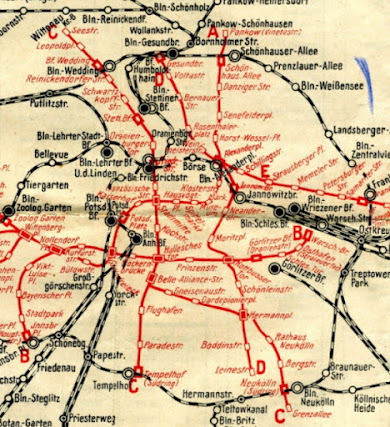 ... with the black lines being the S-Bahn and the red is the U-Bahn, or traditional underground.
The Berlin S-Bahn is a rapid transit railway system in and around Berlin. It has been in operation under this name since December 1930, having been previously called the special tariff area Berliner Stadt-, Ring- und Vorortbahnen (Berlin city, orbital, and suburban railways). It complements the Berlin U-Bahn and is the link to many outer-Berlin areas, such as Berlin Brandenburg Airport. In other words, the Berlin S-Bahn is a mix between a Commuter rail service and a Rapid transit line.
The S-Bahn has full sized trains painted red and cream ... 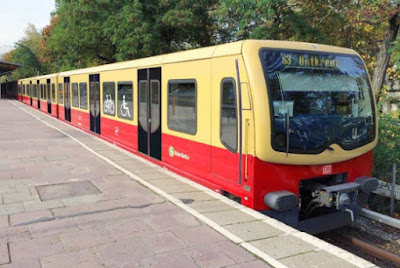 ... whereas the U-Bahn trains are smaller and yellow. 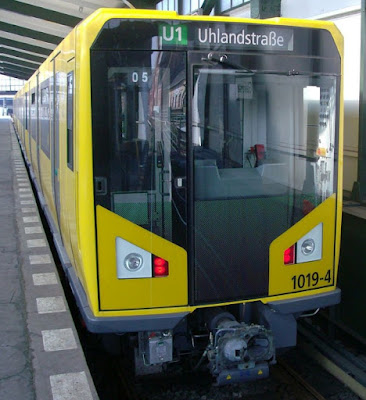 But the geographical map is pretty much incomprehensible and does show why Harry Beck's London diagram was such a work of genius.
Any such maps fell unto the hands of the political unhappiness after World Way 2. The idea was to prevent Germany from regaining its power by chopping government into bits overseen by UK, France, Russia and USA. But the Russians went further than this and created a separate country of East Germany.
The capital, also split between the four powers, was totally surrounded by East Germany and West Germany moved their capital to Bonn.
So here is the Berlin S-Bahn network courtesy of the crowd from the Kremlin. (click on the map to enlarge it) 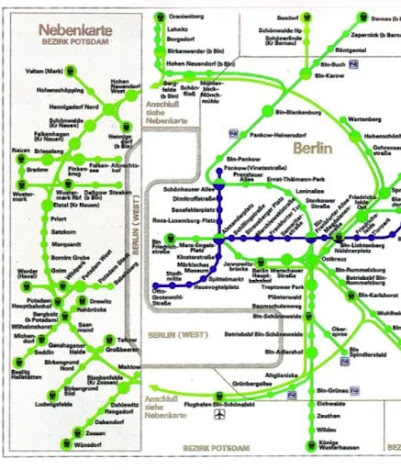 In this case S is green and U is blue. But all is not what it seems. Look closely and you will see that the outer circle S-Bahn service in the East German suburbs that surround the bipartite city appears complete - but in the middle there is a narrow gap. 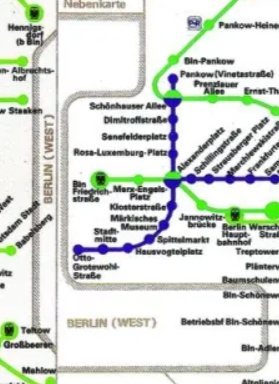 That narrow sliver with the grey border is the whole of West Berlin complete with its expunged rail services.
Maps have existed of the S-Bahn only (click on the map to enlarge it) ... 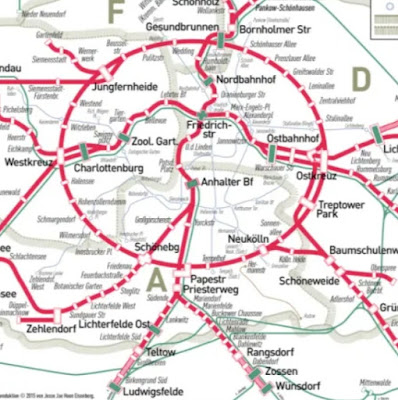 ... a curious mixture of diagrammatic for the "circle" and geographically accurate (-ish) for the rest. Note that the paler sections of pink are for lines still operated by Dampf (artist's impression below - note the destination board). 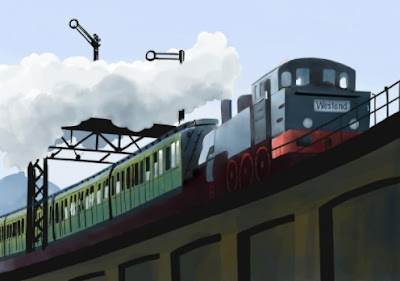 The modern Berlin map does not make any effort to differentiate between U and S in terms of line thickness or dash style. Fares are graduated by three zones, not by "operator", so the local network appears as one.
But the map is complicated and takes a significant amount of effort to unravel the service pattern ... 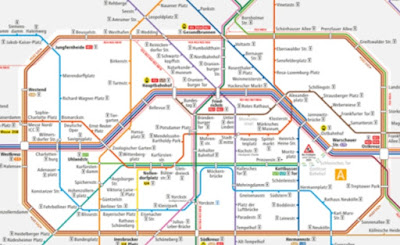 ... and it is in the central area that we might struggle, although, arguably, it is less complex than the revised new Tube map! Here, for example, is the bit that shows the former U55 mini-underground line, now part of the full length U5 (DARK BROWN). 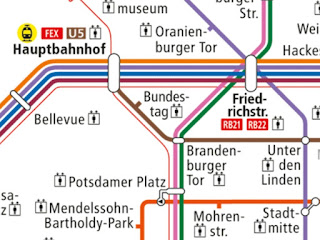 The thin red lines are the equivalent of the UK's National Rail services shown with their route codes, in white on red boxes.
To see what the network has to offer us by way of extra help, fbb will look at a simple chunk. 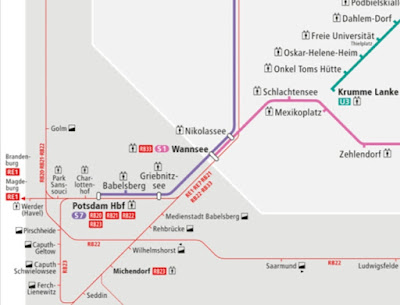 Ironically, it is the only bit of the network that fbb has actually ridden. When taking an overnight break in Berlin on the way to nephew's wedding in Poland, the fbb party took a ride to Potsdam on the S-Bahn. It was underwhelming!

So lets begin with information for line U3 (TURQUOISE) terminating at Krunne Lanke. 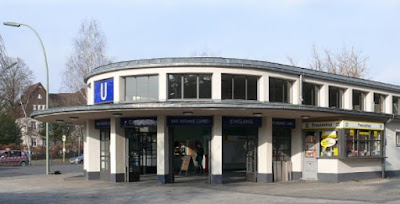 The station has a touch of Charles Holden about it. The original building ... 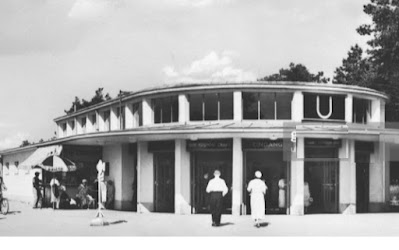 ... was demolished as it was falling down, but it was replaced like-for-like. The original architect was, indeed one of those who influenced Holden, as below with Chiswick Park. 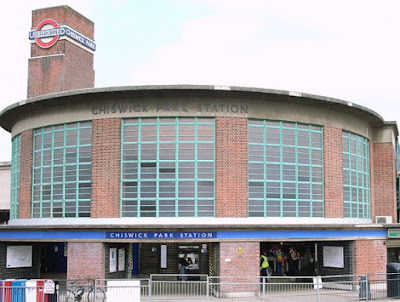 So what extra information can we glean about the U3 from the Berlin City Transport (BVG) web site.
Answer; not a lot! It looks encouraging ... 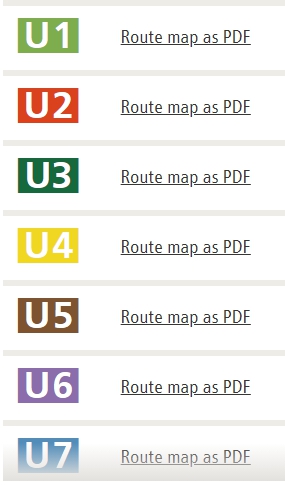 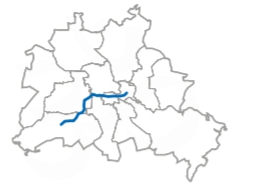 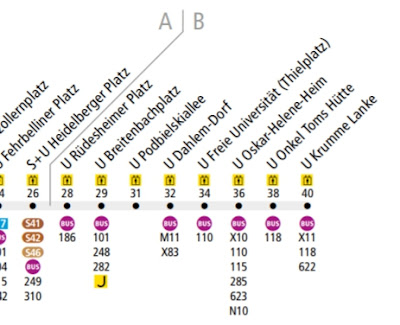 ... showing the A----B fare zone boundary. Also shown is a list of everything else that stops at each station.
Finally we are provided with a frequency list for Monday to Thursday (click on the graphic to enlarge it) ...

... Friday, Saturday and Sunday.
fbb does not understand it and the so-called "timetables" seems to forget to tell you that part of the eastern end of the line is closed! 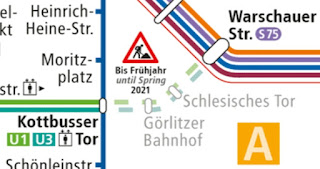 But the best we can glean is that the U3 runs every 10 minutes early morning and late evening and every 5 at other times - or so fbb thinks. It might run in two sections with a change at Nollendorfplatz but that point is also unclear from the information given.
So, much like London's underground, you have a map and a rough guide to frequency with first and last trains shown.
That's probably good enough as most journeys are short and you know that there will be another one along in a few minutes.
But what about the S-Bahn,
The Berlin S-Bahn is a rapid transit railway system in and around Berlin, the capital city of Germany. It has been in operation under this name since December 1930, having been previously called the special tariff area Berliner Stadt-, Ring- und Vorortbahnen (Berlin city, orbital, and suburban railways).[1] It complements the Berlin U-Bahn and is the link to many outer-Berlin areas, such as Berlin Brandenburg Airport. In other words, the Berlin S-Bahn is a mix between a Commuter rail service and a Rapid transit line.
The BVG (City Transport, operator of buses and U-Bahn) gives us a bit of a shock:-
Die Berliner S-Bahn wird von einem eigenständigen Verkehrsunternehmen, der S-Bahn Berlin GmbH, betrieben. Informationen zu den Fahrplänen und Konditionen erhalten Sie auf deren Website.
Informationen zu störungsbedingten Fahrplanänderungen im S-Bahn Verkehr: www.sbahn.berlin​
Natürlich informiert die BVG fahrinfo online auch über alle S-Bahn Haltestellen und Fahrtzeiten. Für Fragen und Hinweise rund um die S-Bahn Berlin wenden Sie sich bitte an:
Telefon: (030) 29 74 33 33
Kontakt: sbahn.berlin/kontakt​
Of which more tomorrow - including the English version of the above.
Nächster Berlin Transport Kartenblog - Dienstag, 12. Januar
Posted by fatbusbloke at 02:00