It is amazing where ostensibly simply projects lead you. fbb has, for a couple of years, been assembling a collection of OO gauge tank wagons with the aim of understanding the history of  4mm to the foot model manufacture in the UK. The story is far too complex to cover in blogs, and probably too tedious for most of our readers. But it is fascinating!
With the help of his recently purchased book ... 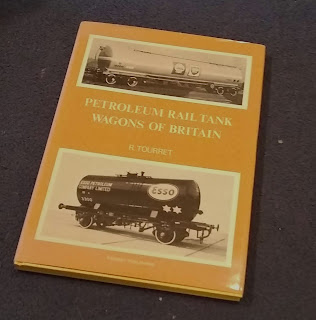 ... fbb has begun to get a feel for the task in hand, starting with Trix UK sales in 1938 and Hornby Dublo a year later.
By the time these toy makers started their businesses, real full-size tank wagons had been in operation for at least 50 years. Indeed, the book has a picture of the very first tank wagon ever made in the UK, built in 1881. 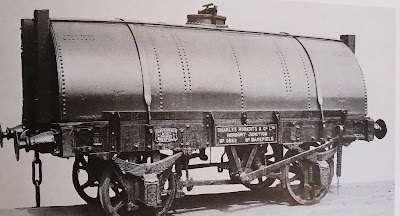 The D shaped tank sat, unfixed, on a standard wooden wagon chassis; held front and back by vertical stanchions braced with metal rods which sat on both sides of the filler cap atop the tank. The tank was held down by two metal straps, bolted to the wagon solebars but not fixed to the tank itself.
By 1887, tank wagons were beginning to look more like OO gauge models! 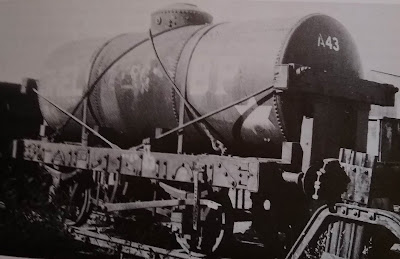 Note that the front and back stanchions are now braced diagonally to the solebars and the two straps are augmented by wire ropes wrapped over the tank. The chassis is wooden.
The finest model tank wagon is that produced last year by Oxford Rail. 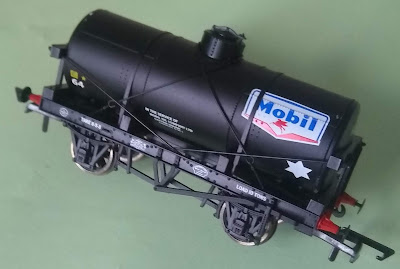 In this case the chassis is "metal", but, obviously, moulded in plastic! The tank sits (unfixed in reality but well glued in the model) on four beams laying across the width of the chassis. This construction is the "saddle" as illustrated at the head of this blog. In fact, there are two main saddles shown very clearly in this shot from above. 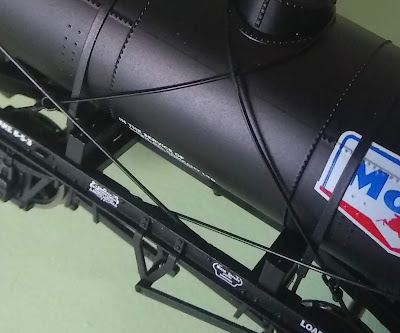 The end "saddles" are part of the stanchions and just provide a teensy but of extra support for the very end of the tanks. The brakes are simple hand operated shoes applying on the inner tread of the wheels. 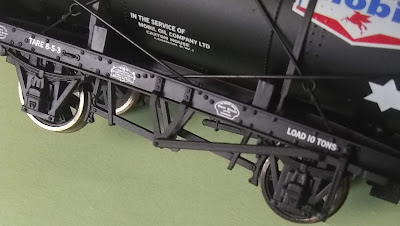 Generally, there was no outlet at the bottom of a tank for "white" fuels, those more likely to burn or even explode (like petrol); the only way in and out (by pump or syphon) was via the top. 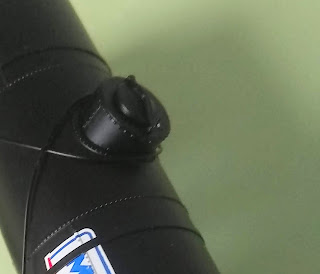 Likewise there were no fixings from tank to chassis; in order to prevent leakage and thus possible danger.
Restrictions also applied to the way in which such tanks were marshalled, "barrier" empty wagons had to be placed between tankers and locomotive and between tankers and guards van. Speeds were sternly controlled but, if your wagon passed its tests it might be allowed to roll at a spanking 35mph, in which case a star was painted on the side. 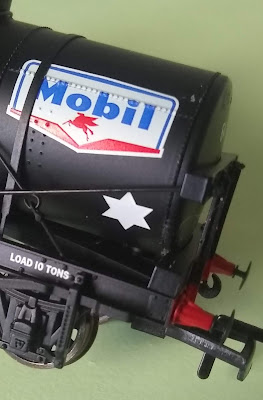 In very simple terms this design (or its derivatives) remained constant until after WW2
Sometimes tanks were "cradle" mounted. In this design two hefty wooden beams ran from front to back and the tank sat on those. Other fixings tended to be the same. This Bachmann model shows the cradle very clearly. 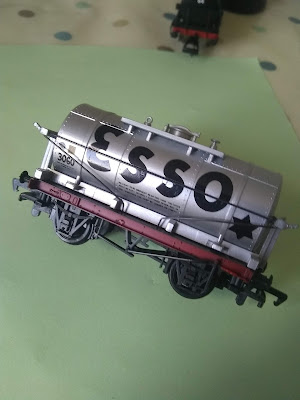 The four blocks each side support that bracing for the end stanchions and the fitments for the two straps. But all the pictures in fbb's new tank wagon book do not show such lumpy projections. 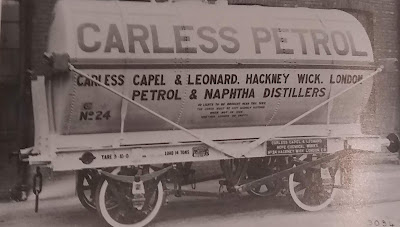 Only the cradle is visible. Did Bachmann get it wrong? It is difficult to pass judgement as there was, pre-war and immediately post-war, a huge, huge variety of wagons made by different builders. Quite possibly Bachmann's model is based on a real wagon, but one which has not found it into "the book".
Also note that there is a little wheel next to the filler cap. 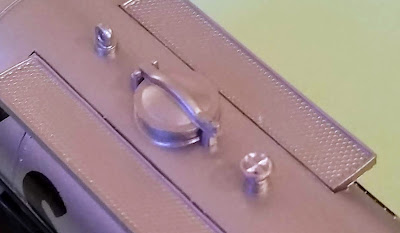 Turning this opened a valve in the bottom of the tank to allow emptying from below. Thuis tank is in its later color scheme which was aluminium for lighter (explosive) fuels and black for the more gooey stuff or things like paraffin or diesel which don't blow up quite so easily.
Just to confuse us all, the Bachmann tank wagon shown above was retailed by a Swindon company called Replica Railways and not by Bachmann. 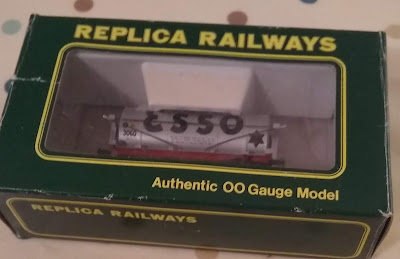 Confusing, innit?
Finally in this little sequence we have the anchor fitment, In this case the tank was bolted or riveted to solid metal brackets which were in turn bolted to the metal chassis; so no need for stanchions, stays and straps! 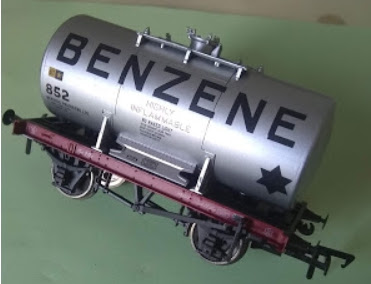 A picture from "the book" shows that this model is "right" ... 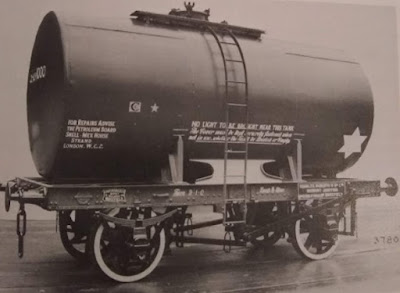 ... but reveals a more complex structure than in the model. No doubt the anchors did vary.
One thing is for certain. A keen modeller, intent on accuracy, will have a fine time sorting all this out; and that is before you look at liveries!
Thankfully for his sanity, fbb is only interested in the different types of models actually manufactured. Whether they are an accurate representation of reality is, for fbb, only an interesting side issue.
But maybe a further look at livery, both model and real, will be in order?
By way of a couple of PSs (PSes?), note the exquisite modelling of the hooks and rope tension thingeys on the Oxford wagon. 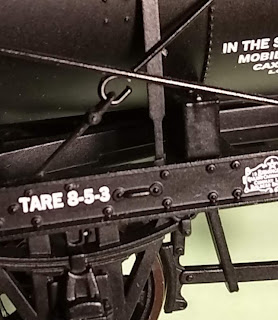 No maker has ever attempted that before! Also, in this engineering sample ...

... it implies that the strapping (coloured gold) is separately applied to the tank body. Imagine what a mess-up fbb could create trying to do that with his stubby fingers are a tube of polystyrene cement!
Of course, today's tank wagons are significantly more expensive (taking inflation into account) than those on offer in the late 1930s. And we thought that Hornby Dublo was pricey when we were kids!
Snippets 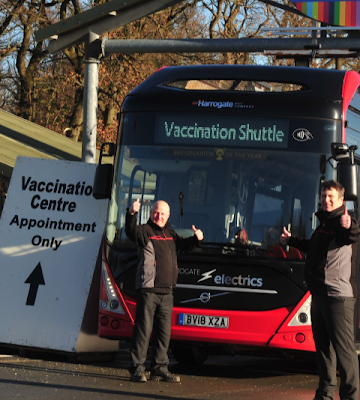 The latest and helpful craze. Free vaccination "shuttles" in Harrogate, above and Gateshead below 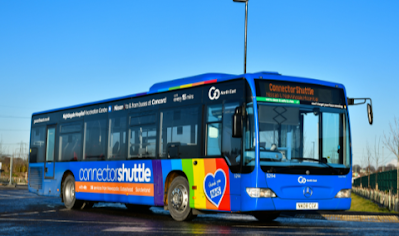 And a livery tease from Go Ahead North West. 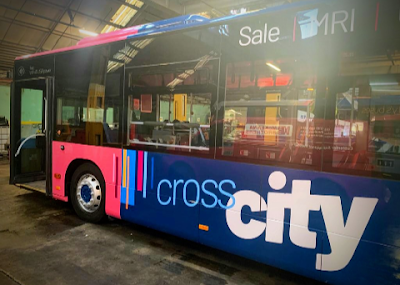 ... part of a grand and unfulfilled scheme to have far more buses running across the centre of Manchester. Remember First's 41 and 42? 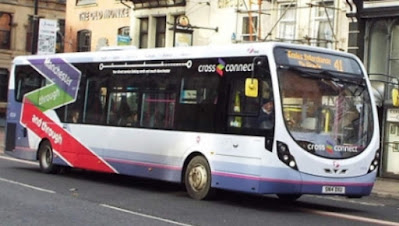 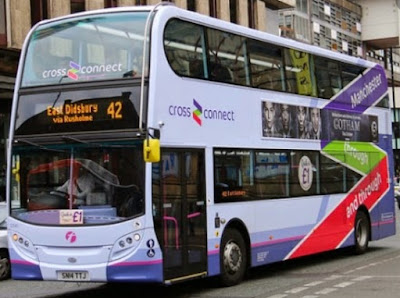 Confirmation, if we needed it, that some First Kernow open top services will retain the Atlantic Coaster name. 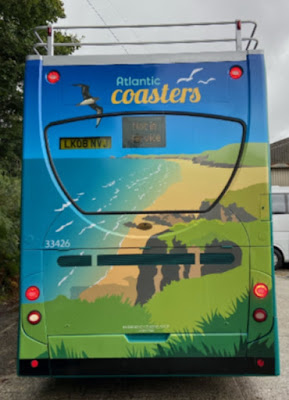 Amongst other things, tomorrow fbb, without the aid of a safety net, intends to deconstruct a Hornby Dublo tank wagon. Such excitement.
That is IF fbb can recover from today's all-nite partying in celebration of Mrs fbb's Birthday. The number, is of course unmentionable - but we all remember the trombones!Video discovered by No 3 Son on-line!
Next That's The Way To Do It blog : Wednesday 27th January
Posted by fatbusbloke at 02:00