There has been some shock in the minds of rail observers. Stagecoach has run the Southwest Trains franchise for twenty years and more. Most commentators agree that it is one of the best run in the UK. So why change?

Naturally, First Group have been quick to adulate their wonderful plans for the franchise ... 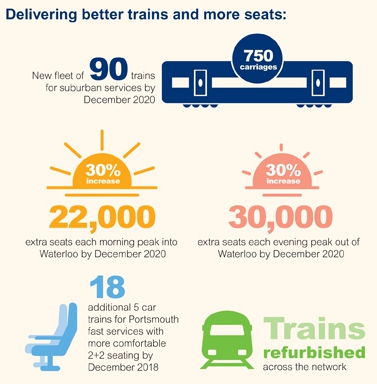 ... and it all seems super smashing and lovely. 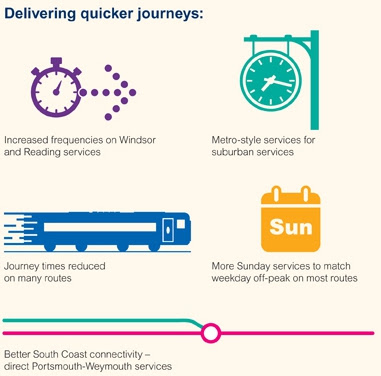 Of course we do not know what Stagecoach offered as their super smashing and lovely proposals but fbb guesses that it would look very much like First's plans. Most of these developments have been announced for a number of years and there is a limit to what can be done to improve services. There simply isn't enough room on the tracks and, you can bet several bottom dollars that First will not be shelling out the megabucks needed to add extra lines.

But fbb has received a "leak" from First's bunker near Paddington Station. It comes from Andy Prill First rail design group leader.

Following on from the huge success of our GWR branding in a traditional deep green ... 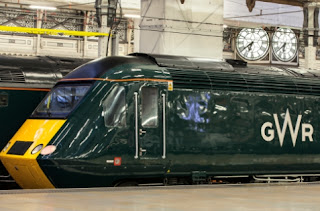 ... we have decided to do something equally traditional with the tired old Southwest Trains image. We will replace the gaudy blues, whites and reds of our predecessors with something that exudes the quality and the tradition of services on these historic lines.

... are shown on one of the new class 700 units currently being painted red by Stagecoach.

For those unfamiliar with the history, here is the basis for Mr Prill's design. 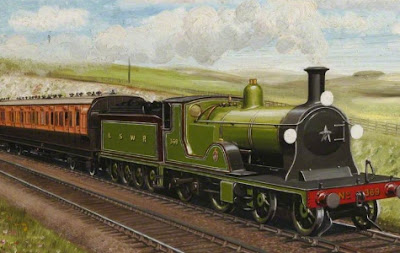 Cheap Ferry Fares On Offer - Or Not?
News broke earlier this month that Red Funnel was up for sale again. 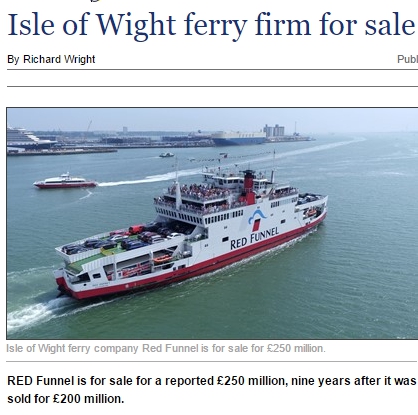 The current owners are hoping to make a small profit on the deal of £50 million!

Soon afterwards, the further news broke that the Isle of Wight Council was intending to make a bid. For those that are less familiar with the Machiavellian politics of the Island, this is the council that is so "broke" that it cannot pay for libraries, public toilets, road repairs and is seeking to "sell" its education services to Hampshire.

So where will the money come from?

The Isle of Wight Council could buy a slice of Red Funnel — if Island Independents regain control of the authority.

As the Island Independents prepare for the council election, group leader Julia Halfbaked-Smith, announced it is working toward being part of a bid for the company as "a top priority after May 4."

They want the council to pledge some of the £200 million it is borrowing for investment projects together with pension fund or infrastructure investors with who a community bid would be compatible.

The other political groupings brand the decision as "A Fool's Errand"!

It will never happen.

Name The Ferry : The People Vote
A new ferry is due to start work on the Island very soon linking East Cowes with West Cowes across the River Medina. 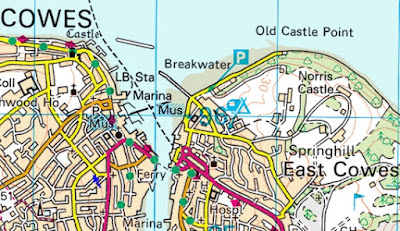 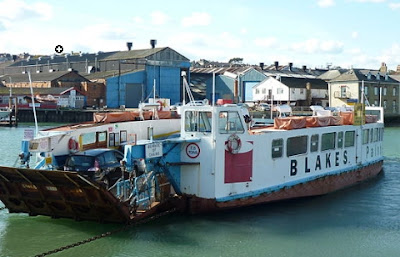 ... is out of service to allow work to be done on slipways etc, in readiness for the new arrival.

The new "bridge" looks very flash with greater areas of glazing so passengers can enjoy the view on the very short crossing. 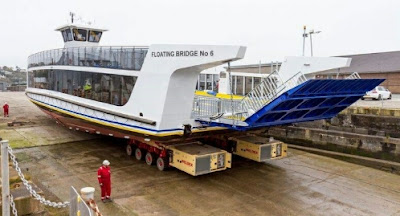 The Isle of Wight Council has invited to public to suggest a name. One name was immediately banned but has recently be upgraded to be an acceptable possibility. Will the Council now use the most popular name? Instead of "Floating Bridge Number 6", will it really be ...

South West Trains Franchise (2)
In amongst the misgivings about the change of franchisee for the Southwest Trains business, some campaign groups are already beginning to put pressure on the incoming operator. fbb has picked up a scheme being promoted by B.R.O.L.Y, the Brockenhurst and Lymington branch line campaign group.

Once upon a time, rains connected with the Wightlink ferries to Yarmouth IoW. Nowadays they do, sometimes. The main business is with cars and the station at Lymington Pier is about as basic as a station can be. 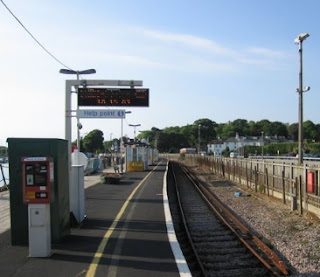 For a while, Stagecoach ran a train of old "heritage stock in Southern green ... 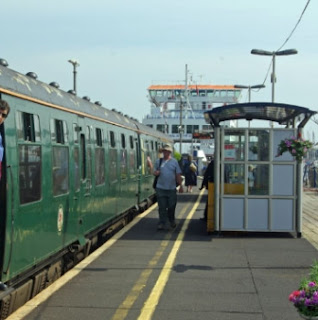 ... and equipped the departure platform at Brockenhurst with traditional "sausage" signs. 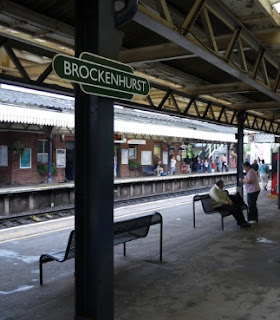 B.R.O.L.Y. is campaigning on two fronts. One is to provide an hourly through train to London Waterloo and, to maintain the present half hourly service on the branch, has this innovative scheme.

They want the new franchisee to build a reproduction of an original London and South Western Railway train, of an adequate size to cope with the number of passengers now using the branch. It would be similarly powered to VivaRail's former D stock ... 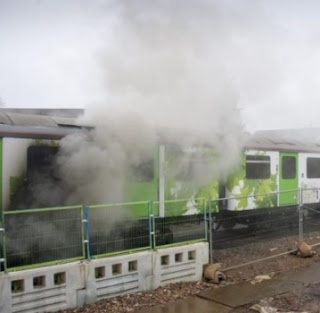 ... but without the underfloor heating! Here is an artist's impression of the new unit.

To cope with enthusiast demand, the machine would be powerful enough to haul one extra coach of matching design. Negotiations are already in hand with the Isle of Wight Steam Railway for a long-term hire of one of their vehicles. 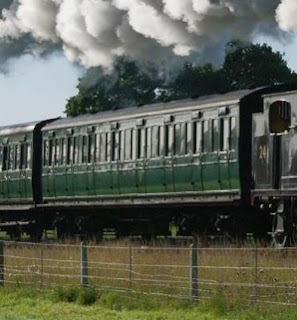 New Trains for Island Line?
The Isle of Wight County Press is "cautiously excited" about the new South West Trains franchise. Reading between the lines, there is little to be excited about. Nevertheless the newspaper is always ready to speculate. Under a tag "Might Island Line trains morph into something like this train on the Hong Kong Tung Chung line"? ...

Answers on a postcard, please, to the usual address!

County Press readers will be fmiliar with the similarities between the Hong Kong metro and the Island Line ... 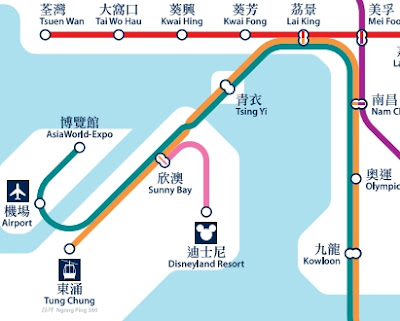 ... and the affinity between Tung Chung station and Brading! 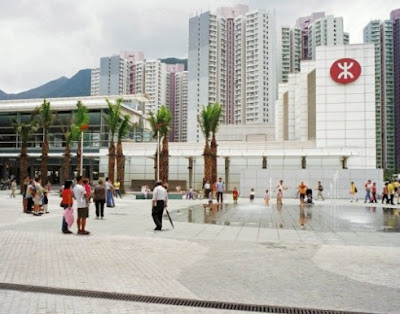 MTR is the operator of the Hong Kong Metro and a 30% partner in the new South West Trains franchise.

Thanks for Keeping Us Informed
Our Northampton correspondent was very impressed with the heightened level of information on the County's bus timetable site. It this sort of helpfulness that should be a lesson to all concerned in Sheffield. 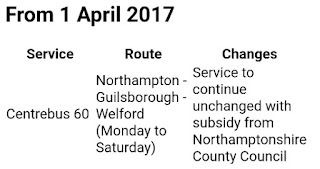 Alan can now happily re-arrange his travel plans! Is the date significant?

The question is, "Which of the items above contain 'fake news', prepared just for today'?

Next variety blog : Sunday 2nd April
Posted by fatbusbloke at 02:00