Another goody from the Julian Peddle (JP) envelope of delights is the timetable booklet for High Peak Buses, centred on Buxton. 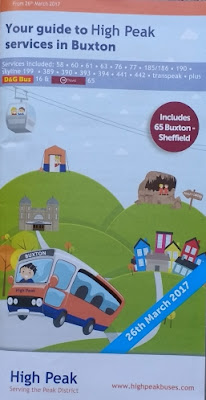 This now includes the full service 65 between Buxton and Sheffield, operated jointly with T M Travel. D & G route 16 from Hanley is there as well.

There is a map of sorts which is used to promote the excellent value ... 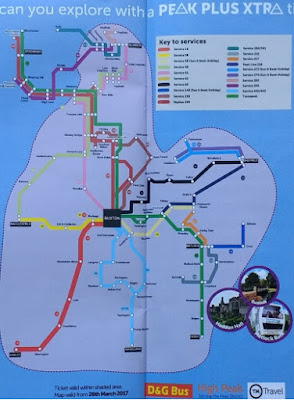 ... Peak Plus Extra range of day tickets. This product is valid with the Peak District area but not into Stockport or Manchester. It can be used on T M Travel's 216, 217 and 218 services, plus 273/4 and 140 on Sundays and Bank Holidays, although, understandably, these non-Buxton timetables are not available in the book. Peak Plus Extra is £12.50 adult and £8 child wit the added value Family Ticket at £23; although fbb could not find a definition of "family" in the booklet.

There is, however, a good map of Buxton town services with details of departure stops. 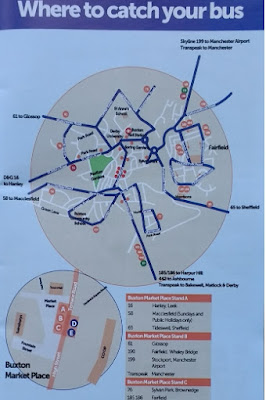 This would be more legible if it were a two-page spread.

More general information on fares and concessions is included in a handy hints page, but, again, no specific prices are quoted. 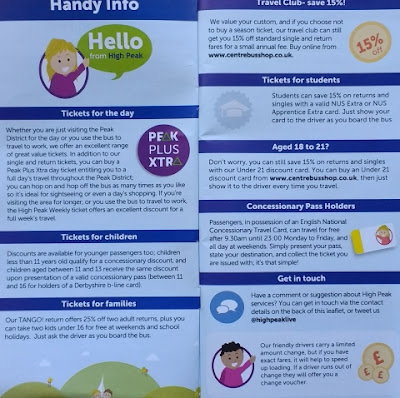 What is impressive is the amount of promotional snippets dotted all through the booklet. One of the grave disadvantages of the modern craze for leaflets is that you cannot easily be tempted to make trips on other parts of the network. 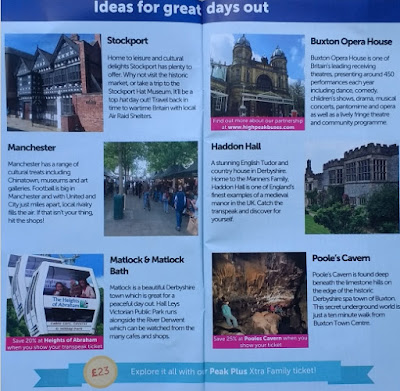 But High Peak offers many temptations to travel by bus; from the domestically mundane ... 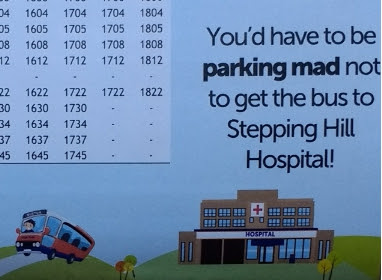 ... to the ferocious "mouth" of Poole's Cavern. 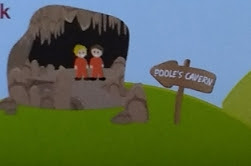 fbb is already contemplating the possibility of a Buxton-based holiday (with Mrs fbb) on the strength of this excellent booklet.

In the envelope were two separate leaflets, These were for the high profile TransPeak and Skyline routes.

Transpeak has had a variety of guises in its long life ... 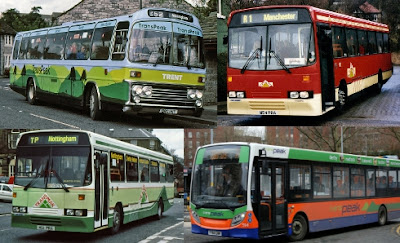 ... and now, seven days a week, runs hourly between Derby and Buxton along the busy but picturesque A6 with 5 trips (or part trips) extending to Manchester. It now has shiny new buses. Skyline runs from Buxton to Stockport and Manchester Airport every 30 minutes (hourly on Sundays).

But these two leaflets are slimmer than the standard timetable. "For why?" we hear our readers cry. All succinctly explained by JP in an email.

In the leaflets I sent you were odd size ones for the Transpeak and the 199 Skyline which are to TfGM size so they fit in their rack system in place of the bland things they produce. 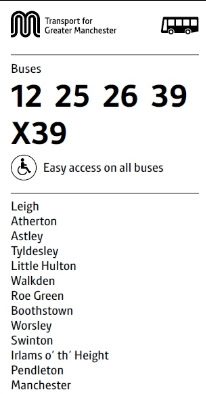 We need our services to stand out.

Manchester leaflets are based on an A5 booklet but folded in half.

Returning to fbb's "obsession" (as defined by our much loved but picky anonymi!) with buses in Sheffield.

Think what the "partnership" could do along the same lines. 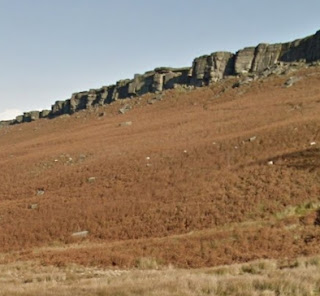 Various routes to the magnificent
Sheffield Round Walk,
120 to Fulwood for Forge Dam
81 to Whirlow fo Whirlow Brook Park
97/98 for Abbeydale Industrial Hamlet

X1 for Magna at Templeborough
X78 for Conisborough Castle 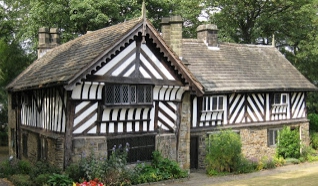 51/52/52a to the magnificent Weston Park and Museum 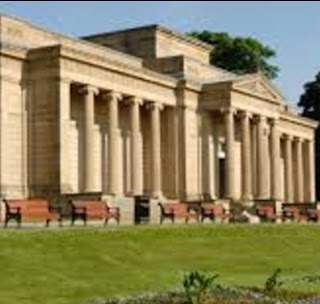 Currently none of these is promoted as a bus destination. All that is needed is some leaflets that stand out; or, even better, an explore Sheffield booklet. Cost, negligible; result, always positive with more bums on seats. 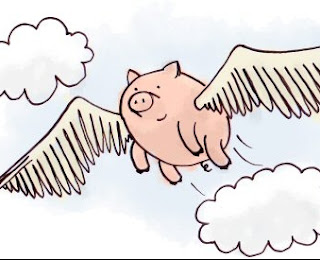 Yeshua Ben Yusuf  (Jesus) predicts a figless future and confirms that something big and something new is happening. 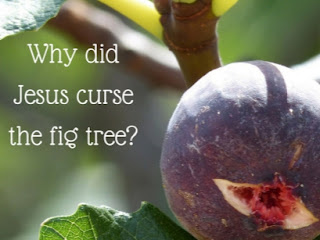 On his way back to the city early next morning, Jesus was hungry. He saw a fig tree by the side of the road and went to it, but found nothing on it except leaves. So he said to the tree, “You will never again bear fruit!” At once the fig tree dried up.

This is Matthew's Gospel version of a weird little incident. What had the poor fig tree done?

As with the incidents already mentioned in these blog snippets, the best way to understand this, the Palm Sunday parade and the rigorous Temple clear out is to see them as a "visual aids" to the whole purpose of Jesus' ministry.

The King arrives to claim victory, a spiritual victory which will provide the wherewithal to change peoples' lives, to change the world.

But there is lots of rubbish to be cleared away first. The old, ritualistic over regulated Temple "system" needed to go. The Fig Tree of the Jewish religious hierarchy would never again bear fruit. 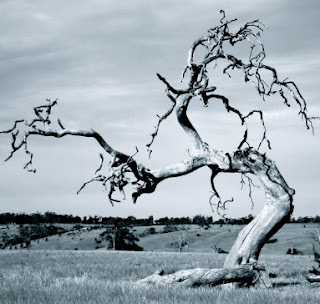 Hardly politically correct, especially when you know they are about to kill you.

Next Burton blog : Wednesday 12th April
Posted by fatbusbloke at 02:00