Do It Yourself Bonanza

Apparently the Easter weekend is one the biggest business times at DIY stores. With spring flowers, chocolate eggs and Easter bunnies comes a desire to refresh decorating and make a start on those essential DIY jobs.

So fbb should have been sanding his soffits, creosoting his corbels and pruning his petunias.

But he didn't. The main tasks were to prepare the model railway for the state visit of the Fearnley family with special reference to Thomas the Tank Engine fans, Archie and Georgina. 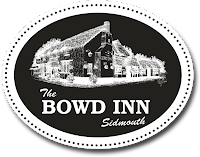 Lunch was taken at The Bowd (children's play area plus carvery every day - scrumptious!) whence the party repaired to fbb mansions to enjoy the trains. And it was very much a Thomas event. 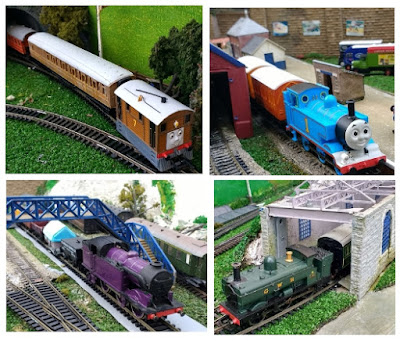 From top left and clockwise we see : Toby with Henrietta at the rear and an extra coach to deal wit the Easter crowds; Thomas with Annie and Clarabel at the platform; Ryan without lettering and lining on the goods and a (sort of) Duck in the roofless carriage shed. 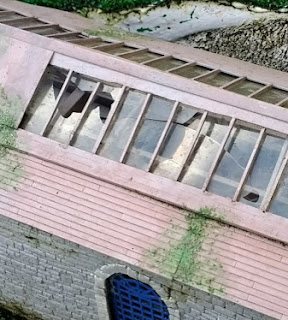 The carriage shed suffered badly in a recent hailstorm and removing the "glass" also removed many of the fragile glazing bars ... 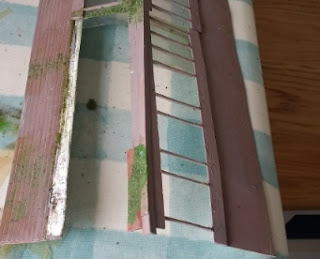 ... so a major rebuild is needed. This was too big a job to complete before the weekend.

The other bad news was a serious collapse of the quarry face. 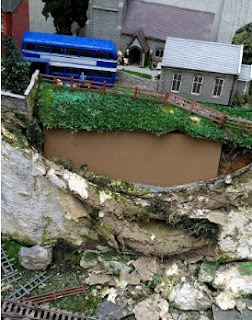 This was built by covering a chunk of Mrs fbb's old bath towel with sand an cement mix. But the towel has rotted away with very visible consequences. A temporary bodge with offcuts of wood and some Tetrion filler will suffice for this season ... 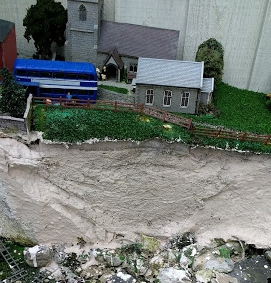 ... but a major geological rebuild will be necessary. Hey! fbb has just noticed that a couple of passengers waiting fro the bus have collapsed into a hypothermic coma as a result of the bad weather.

There they lie between fence and bus, waiting for the paramedics to re-glue their feet to the roadway. Very nasty!

Cleverly (NOT) fbb had created a neat edge to his platform by using painted strips of balsa, quite unsuitable for the rigours of an East Devon winter by the seaside. 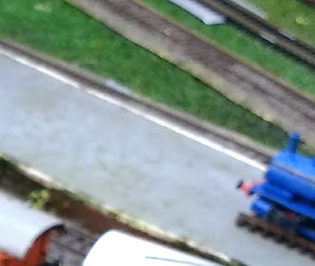 Replaced with square section plastic rod, combined with a new surface on the platform, has tidied things up significantly. 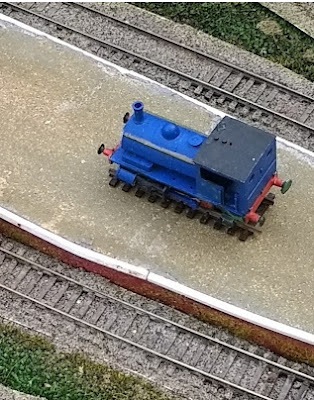 The new surface was formed with a thick layer of grey paint sprinkled wit gerbil sand and sealed with a thick coat of clear matt varnish. The "pug" loco, by the way is not there as a result of a major shunting accident - it represents a non-functioning display of a former quarry company shunter.

Which just leaves the track to clean. But it's not just the tops of the rails that need a good rub down. Everything is made of nickel silver, so it doesn't rust; but it accumulates huge amounts of yuk, especially as fbb mansions is next to a busy building site.

So the sides of the point blades and the little electrical contacts ... 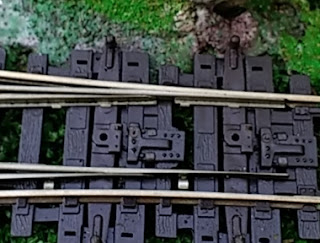 ... need a good rootle with cotton buds soaked in some sort of solvent. The photo below shows the consequence on just one cotton bud. 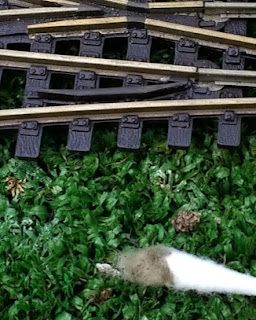 If this clean-up is not done, the locomotive comes to a skidding halt as it crosses the point "frog" due to a sad lack of the electric.

But all was well. The 4mm scale visitors to Peterville Quarry Railway could enjoy the new Thomas Exhibition ... 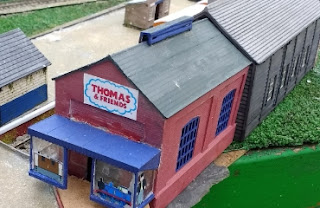 ... complete with an animatronic Rev Wilbert Awdry welcoming folk as they arrive. (Perhaps not!). More importantly the young Saturday guests could see trains trundling back and forth hauled by some of their favourite Thomas characters. Happiness all round"

Many readers express their view that fbb is stupid; more specifically several readers have opined that trying to run an indoor-style OO gauge model railway out of doors is VERY stupid. But it does work, despite the early season repair work.

It is astounding how resilient everything is. 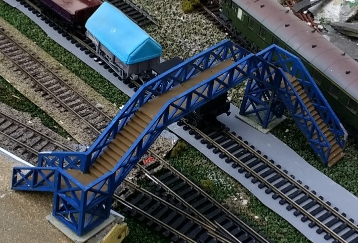 The footbridge, for example, was built from and Airfix (a k a Dapol) kit in October 2014 and has needed no attention since.

The next railway modelling project is a much bigger challenge. There has been a bit of "bovver" at the club that fbb attends. Several teddies have been thrown out of several prams and a restart is under way.

fbb has been asked to "sort out" the wiring on the club's layout. 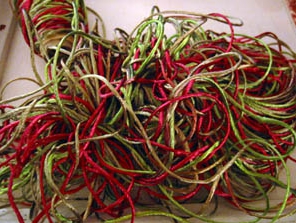 Is fbb an expert at wiring.

But he does understand a bit more (a little bit more) than the other remaining modellers. 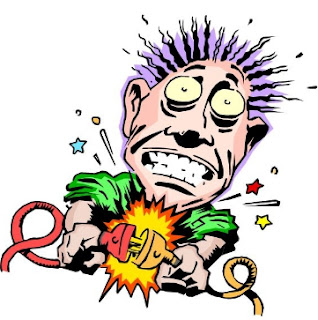 Tomorrow, we are back on the buses.

Next bus blog : Tuesday 18th April
Posted by fatbusbloke at 02:00