Leaving the Best Till Last 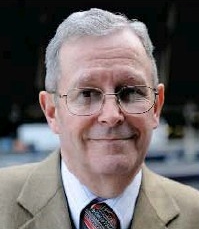 When bus and train guru Barry Doe used to publish his guide to bus timetables in the UK, he would always award a non-existent prize to the best. His guide is now on line but he still extols the virtue of good printed bus timetables and you can read his pages (here).

One of his current favourites was the third goody to be pulled out of Julian Peddle's (JP) jiffybag recently received in the fbb mail room.

Midland Classic was founded in 2005 by James Boddice with a pair of London Central AEC Routemasters operating charter services. 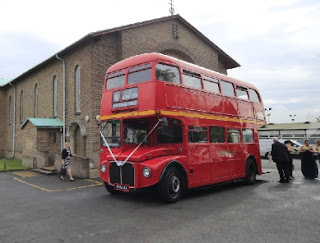 It later diversified into operating "normal" bus services. In April 2016, Midland Classic entered talks with Arriva Midlands to purchase the latter's Burton upon Trent garage. The deal took effect on 27 August 2016 with 30 buses and 80 staff transferring.

The highlight for fbb are the maps. There is an excellent full colour version for Burton over a three fold open out, with only room in this blog for a chunk. 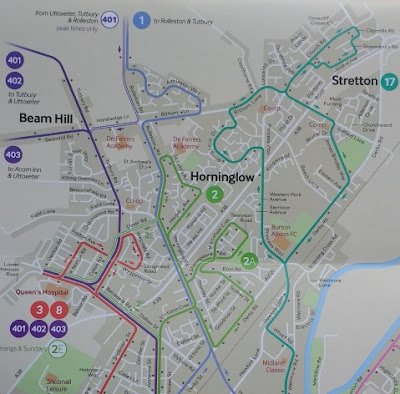 There is a two page in similar style for the Swadlincote area, both historically and geographically a complex knitting together of separated former mining communities. The centre of Burton is also well presented with a clear list of which bus leaves from where below. 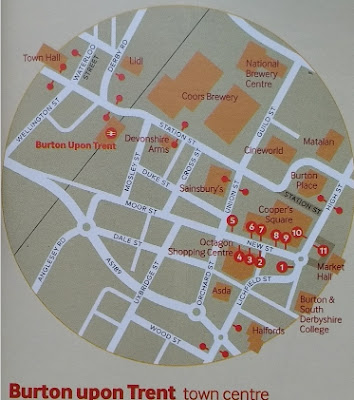 Less satisfactory is the map of the company's longer distance routes. The print is far too small for comfort ... 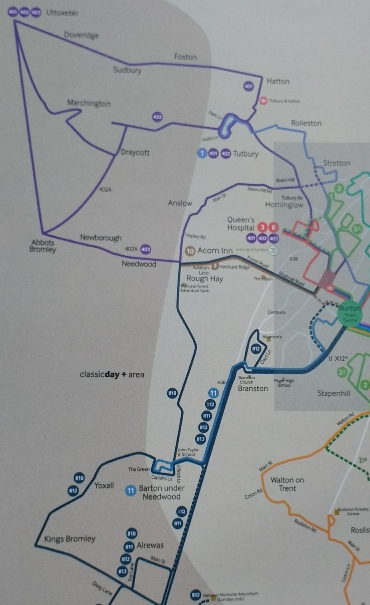 ... and separate maps for each group of services would be better, but, as always, considerations of space and cost need to be made.

"Season" fares and special offers appear throughout the book but individual single journey examples are not quoted. 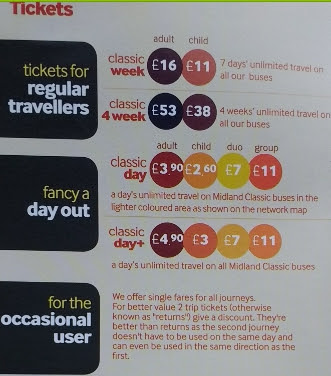 One very neat deal is the "2 trip" offer. It works as a return but can be used for two journeys in the same direction and not necessarily on the same day. Two persona travelling together can also avail themselves of a discount but by far the best bargain is for a group of five (a family that can all be adult). 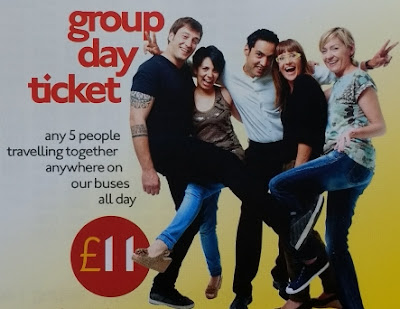 Most services are largely urban in nature with rural routes off into the wilds; here to Coton in the Elms ... 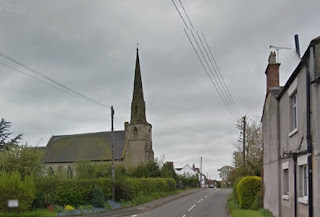 ... with its distinctive Church and pleasant pubs. 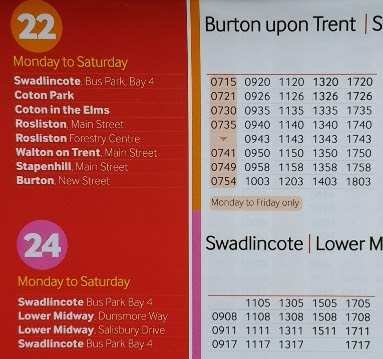 Lower Midway, on the other hand, is an infill of former Council property now extensive modernised. 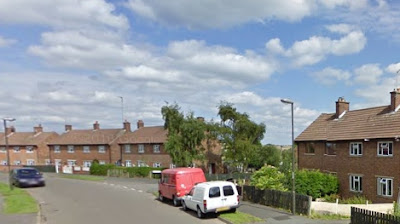 We are reminded in this Burton on Trent booklet that Midland Classic also runs buses in Lichfield ... 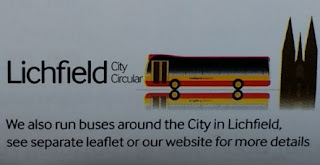 ... on the form of two circulars, recently simplified from a clutch of four routes. 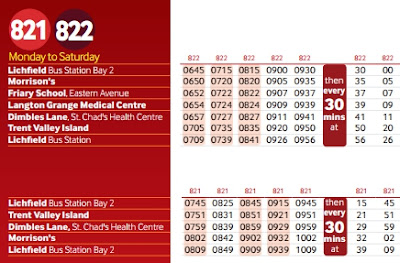 A separate leaflet is available for these. 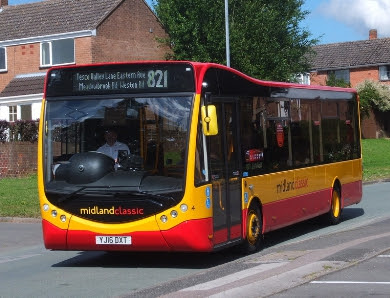 Two final snippets. Looking at Staffordshires bus web site, fbb notes that the two network maps are similar to those in the Midland Classic book. JP informs fbb that there were provided by Midland Classic because the County was no longer updating their own products. 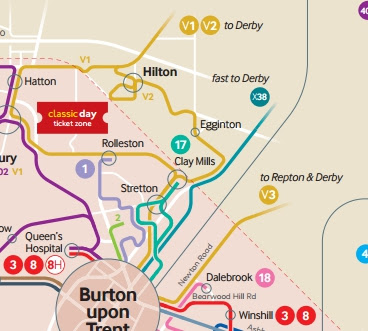 This version shows Trent's V1, 2, 3 and 4 (the latter being off this map extract, the joint X38 and, elsewhere on this superb piece of cartography, the Arriva 29/29A to Coalville and Leicester. JP also reports that this full map will appear in future editions of the Midland Classic book.

Excellent in every way.

Would it be too picky of fbb to proffer a slight criticism? 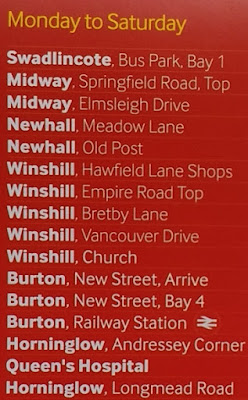 Five Winshills? Winshill Church is the "centre" of the community and a more helpful convention is to refer to other stops as, for example, Bretby Lane Winshill; thus highlighting the central stop.

Back to the obsession!

Absolutely NOTHING like this is available in Sheffield. Leaflets of adequate but obviously cheapo design are produced for most changes of timetable. But the print run is so small that a casual visitor will often find nothing at either of the city enquiry points.

The Gospel writers use the days between Palm Sunday and Good Friday to assemble a collection of some of Jesus' more controversial teaching. Matthew has a grim view of the future, grim indeed.

Then you will be arrested and handed over to be punished and be put to death. Everyone will hate you because of me. Many will give up their faith at that time; they will betray one another and hate one another. Then many false prophets will appear and fool many people. Such will be the spread of evil that many people's love will grow cold. But whoever holds out to the end will be saved. 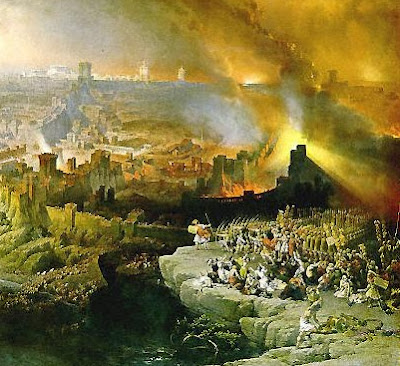 In 70 AD Jerusalem was attacked, largely destroyed as was the Temple itself. There was horrific persecution and loss of life, all at the hands of the Romans, simply to crush a series of relatively minor revolts. The activities of President Assad are nothing new!

But does this passage have a longer term application? The next few words might make us stop and think.

And this Good News about the Kingdom will be preached through all the world for a witness to all people; and then the end will come.

Whether the words of Matthew's Gospel were for the first century or the twenty-first (perhaps a mixture of both?), Jesus' teaching brings a seriousness to the season of Easter. It's a bit more challenging than chocolate eggs and fluffy bunnies.