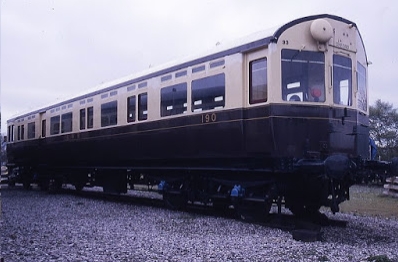 
This particular coach, as well as being historically popular on God's Wonderful Railway and popular with present-day heritage lines, has also been a popular model. Whilst younger enthusiasts have sought big passenger locomotives (with unrealistically short trains!), aged modellers with limited space available have relished the delight of one little tank engine and its autocoach trundling along a miniature rural branch line.

The Hornby model (formerly produced by Airfix) offers a remarkably high standard of detail for its age. As well as the distinctive bell ... 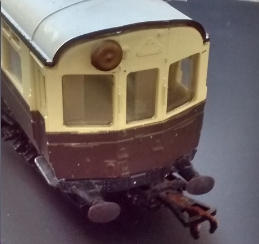 ... the model accurately reproduces the steps, provided for athletic passengers joining the trains at low-use halts with even lower platforms. 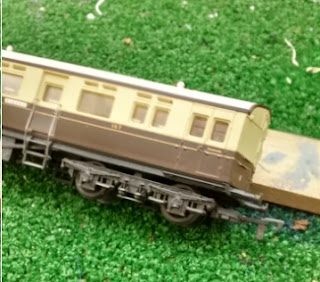 The distinctive elongated buffers are, erm, distinctive. The model coach also has a rudimentary interior ... 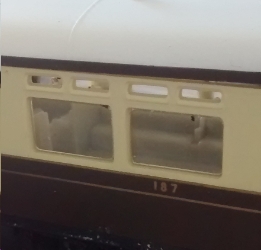 ... which needs (and maybe one day will get) some painting to represent maroon seating plush and varnished oak. 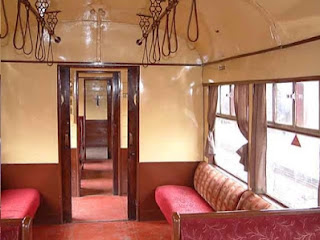 And some curtains. Even the "lower orders" could enjoy luxury rail travel in those "good old days".

Hornby also produced the model in maroon and the railway technical departments red and blue.

Sadly, the real Test Car 1 was a modification of the later version of the autocoach. 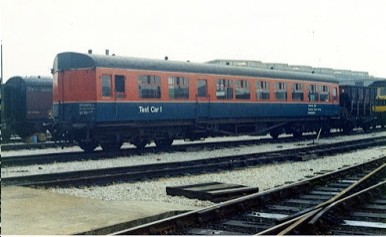 A very attractive vehicle with its original GW bogies and long elegant buffers and it even had its warning bell. It carried maroon livery and the number W233W but was quickly re-numbered DW150375 and re-painted into red and blue.

It was temporarily equipped with a hand-cranked generator set to supply power for instrumentation (and the kettle) and became Test Car 1. Later a more permanent conversion was undertaken with a purpose-built generator room housing a diesel generator set. It was never altered inside apart from the creation of the generator room. The cooking facilities etc were within the main saloon. I don't think it even had a toilet but a chemical one was installed for emergencies.

Later it was equipped with B4 bogies and extended buffer mounts having Oleo pneumatic buffers fitted. No doubt safer and more efficient but this destroyed the vehicle's character.

No doubt the model sold well to those who liked the colours!

Correct models to the original design are (or were) available in many different gauges. Dapol offered a 2mm (N gauge) version:- 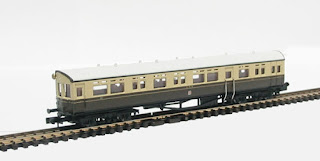 You could buy a 3mm kit (some ancient readers will remember Triang's TT range introduced in 1957). 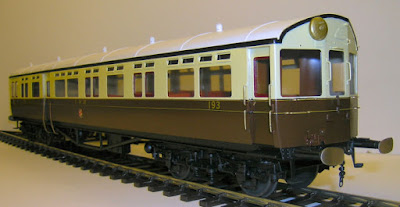 Folk have even built short version to ride on, 7¼ inch gauge. 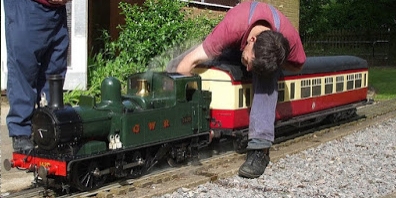 Needless to say, The Rev Awdry introduced "Isabel" in his Thomas books.

And yes, fbb bought the autocoach that (briefly) graced the shelves of his local model shop (£12 - bargain?). Now all he needs is a nice GWR tank locomotive to go with it. More pennies needed in the piggy bank!

If you are a real with-it modern 21st century model railway nutcase enthusiast, you can equip your choo choo with digital control so you can actually drive it realistically; and, of course, you need to add working lights and digital sound as well. Your choo choo will then choo choo in a rather surreal manner.
Maybe also apply for a second mortgage to pay for it?

And a brucie bonus. In Episode 1 of this mini-series, fbb waxed all nostalgical about his youthful trainspotting expeditions at Billing Crossing (read again). Kontributor Ken Traveline-Dorset is a member of Wimborne Railway Society.

Wimborne Railway Society meets every Thursday at the United Reform Church Hall, Chapel Lane, Wimborne, Dorset. We have a varied programme of slide, cine, and video shows interspersed with club nights where members can test their models on our test track, work on one of the layouts, read a book or magazine from our library, or have a chat with a like minded individual.

The club was bequeathed huge archive of railway and bus photos and kindly konsiderate Ken has sought out three snaps of the Wellingborough Rail Motor. These are big photos using oodles of memory but are worth broadcasting here in glorious full-size. Click on the pic for the biggie version.


Departing via the viaduct leading to
Wellingborough London Road 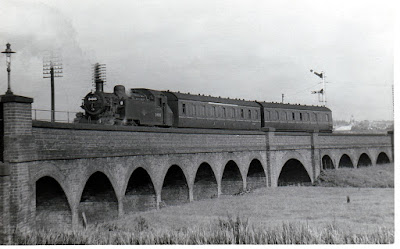 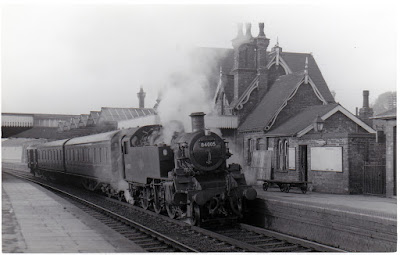 Ready to depart with a different goods van
attached at the front - i.e. back 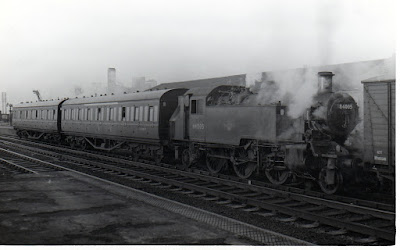 Thanks, Ken : delightful. fbb has no memory of ever spotting the Motor with goods van added.


Next bus blog : Monday 3rd August
Posted by fatbusbloke at 02:00