It's been 250 million years in the making but Seaton Jurassic is nearly here!

Opening in 2016, Seaton Jurassic will be the Jurassic Coast’s newest and most exciting visitor experience.

At Seaton Jurassic you’ll go on a journey through time, over land and underwater, to worlds familiar and alien. You decide where and how far to go! 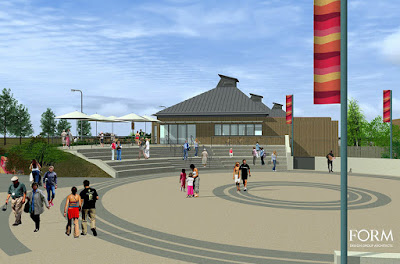 Located in the centre of the town and just minutes from the coast and countryside, you’re close enough to feel the sea breeze on your face and enjoy the Jurassic Coast as part of your visit.

And to celebrate this major development, it could be harder to get to Seaton by bus: unless there is a dramatic re-think of the negative plans announced by First for the winter season. Effectively, from September, Seaton will be cut off from any useful return bus service from the east. Trips from Charmouth with its excellent beach-based fossil facilities and from Lyme Regis with a wide selection of fossil shops and pictures of Mary Anning** (with dog) ... 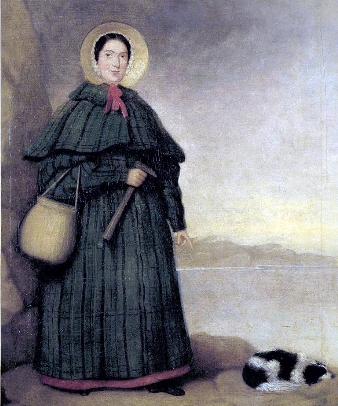 ... will be almost imposssible and anyway 20 minutes slower by the few through buses; or, with an expensive change at Axminster, will be 40 minutes slower and utterly off-putting. 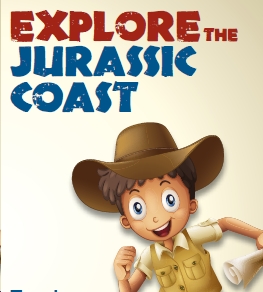 by buses that
don't serve a fair chunk
of the Jurassic Coast.

But perhaps there is a clue to First's policy in their current on-line X53 publicity?

Now that would be an even greater service reduction!

First has launched a Jurassic Coaster app which is available through the Google and Apple app stores.  It provides text and audio commentary to accompany your journey on the X53 service along the Jurassic Coast, a World Heritage Site

Nice App; pity there soon won't be any buses worth catching west of Lyme Regis on which to enjoy it!

Here are just a few ideas to make things better for everyone; including First's piggy bank.

1  Restore a two hourly frequency west of Axminster immediately and PROMOTE the service; yes even in "winter". There are still visitors around right up to the October half term and they are looking for things to do. There was a confusing (£14? £15?) ticket offer on the summer leaflet with the fact that it was for a family in small print. 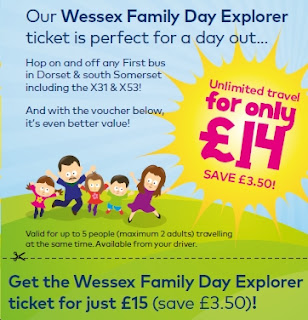 2  If First must run the X53 via Axminster have a chat with Auntie Frances (Axe Valley) and see if various agencies can slip her a wad of tenners to run the quick (and sensible!) way between Lyme Regis and Seaton via Rousdon. Or perhaps uncle Uncle Brian would extend his 52As every two hours to Lyme in return for a de minimis bit of pump priming

3  Stick some Jurassic Coast vinyls on buses for the 157 (Exmouth to Sidmouth) like there used to be ... 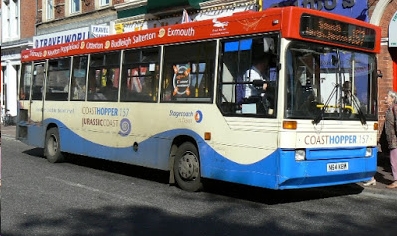 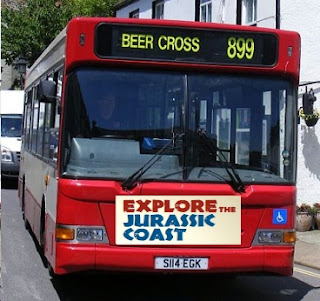 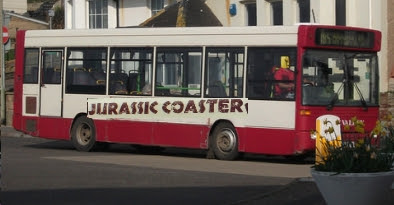 5  Create a Jurassic Coaster rover ticket for Summer 2016. fbb was very impressed with the marketing and plain good value of his £32 three-days-in-seven deal on Dartmouth Train, Boats and River Bus so why not something similar?

£30 for three days in seven; sold by all operators who simply keep all he revenue; no tricky book keeping and an incentive to SELL and PROMOTE. And it can all be linked into the opening of Seaton Jurassic (admission included in the deal, of course.)

6  Ensure that the various deals are promoted on South West Trains timetable leaflets and booklet; all bus operators' leaflets in the area, not just the "included" services and in the East Devon timetable book. First Bus might even consider working with First Great Western to promote the deal.

Sorry; that last proposal is just fbb being very, very silly! It's simply an impossible dream.

7  Have BIG posters in as many suitable sites as possible. (See 6, above)

8  And remember, most of this revenue will be bonus.

9  And don't come up with loads of arguments as to why it can't be done, why it won't work.

And of it's a disaster try something else for 2017. Keep trying! Remember that Jolly Jack Cohen (Tesco founder) created a market for tinned prunes ... 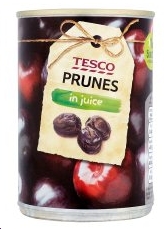 ... (now popular for regular customers) when nobody had ever heard of them. Just because somebody offered him a truckload thereof. Pile it high and sell it cheap works for bus services as well as prunes!

** Mary Anning : (21 May 1799 to 9 March 1847) was a British fossil collector, dealer, and palaeontologist who became known around the world for important finds she made in Jurassic marine fossil beds in the cliffs at Lyme Regis. Her findings contributed to important changes in scientific thinking about prehistoric life and the history of the Earth. Effectively, she invented fossil hunting