Where Was the Management?


At approximately 0900 last Thursday there was a "tresspass incident" near Fleet station. 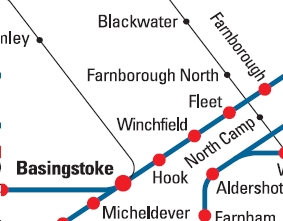 ... the fbbs were happily and unsuspectingly departing from Axminster station to meet up with family at Shoreham by Sea.

And in case you wondered; the fbbs choose this route rather than via Salisbury and Fratton because it is more reliable and takes much the same amount of time. Did fbb say "more reliable"?

A little more was later revealed by the local press. 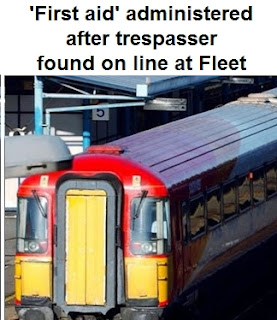 Pity they couldn't find a piccy of a current SouthWest Trains train. The unit above went to Gatwick Express.

Emergency services had to perform first aid on a a trespasser after they were found on the railway line near Fleet on Thursday (August 20). The incident caused the line between Basingstoke and Fleet to be closed for several hours and commuters continue to face delays as a result. South West Trains said the trespasser was removed at around midday, but the knock-on effect was felt throughout the day.

We're on site with @BTP dealing with a trespass incident. ... NEW: Delays between Basingstoke and Woking until at least  11:15  #Fleet http://twt.lt/8np5.

Furious rail passengers vented their anger on social media as many were left stranded on trains.

Many passengers took to Twitter to express their anger. One said: “We’re melting in the train. Not fun with 4 very bored kids.”

One passenger asked South West Trains (SWT) if there was any chance of a refund on his Ashes test match ticket, while another said people were getting into groups for taxis and paying hundreds of pounds because they would otherwise be stranded with no estimated time of arrival.

The passenger added: “Sorry, a terribly handled incident. Lines were blocked for over 2 hours - plenty of time to get replacement bus services going."


It is unwise to speculate but you can't help wondering? In the good old days the principal was always to get the track clear straight away, removing the "problem" from the running lines. This principle seems to have been abandoned in favour of an over-reactive application of "crime scene restrictions" to he detriment of the majority of delayed passengers.

Thus it was that, at about 1130, the fbbs came to a shuddering halt on the approaches to Andover station, due 1137. And there they sat.

Meanwhile, No 3 son was basking on the beach at Shoreham-by-Sea monitoring the old crusties' progress. 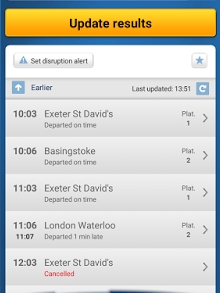 He was deeply mystified because he couldn't find the fbb's train from Axminster to Waterloo.

Because it wasn't there!

Because there was no such train. It had already been decided to terminate it at Basingstoke. (Hence 1006 from Axminster to "Basingstoke" on the screen above.) But note dear reader, this on-line revelation was at   1130 . Announcements on the train continued with many apologies but no mention of getting the heave-ho at beautiful Stoke of the Basing kind!

Eventually, and nearly one hour late, the fbbs crawled towards their as yet unrevealed ejection point, all followed from the East Sussex beachside monitoring station. 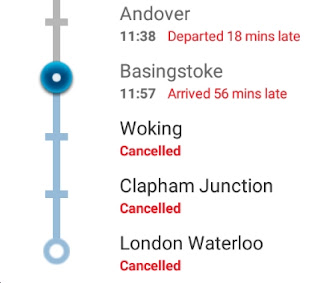 As the fbbs approached the platforms, the guard finally revealed the hitherto secret truth that she had just received from her "control"; followed by,

"For onward travel, please refer to the staff on the platform."

And there was the staff on the platform; viz Kev the hi-viz vested train dispatcher ... 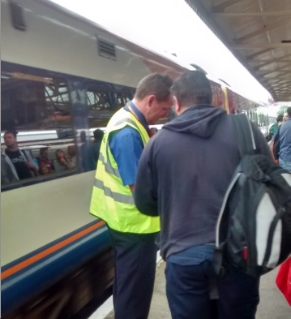 ... who, of course, knew no more than was displayed on the departure screens ...

... and we know how helpful they are in times of crisis.

But the fbbs were OK. The next train into platform 3 was the delayed 1235, calling at Clapham Junction. RESULT! It was announced almost immediately. Fine for Clapham Junction and Waterloo passengers from the far west but definitely not fine for those due to change at Woking.

So arrange for the already late 1235 to make an additional stop?

You must be Woking joking. Tough cheese, you'll have to wait for a train that is scheduled to stop there.

Gloom followed gloom. The train in front was stopped by a communication cord pull; more crawling. Then the guard gleefully announced all the other lines from London that had a "normal service" (Whilst trying hard not to snigger); then warning us with ponderous and apologetic tones that there were delays of 20 minutes on lines to and from Victoria. Guess where the fbb's train to Shoreham by Sea was coming from?

Arrival at Clapham Jct was a modest 90 minutes late and just in time to miss the 1422 south! fbb felt a strong compct to scream. His brain had ceased to fct. He was much in need of spiritual ct. But hold fast there Cap'n! The screens for platform 13 were showing a delayed 1422 expected at 1429. RESULT!

Only 99 minutes late at Shoreham by Sea. Only! 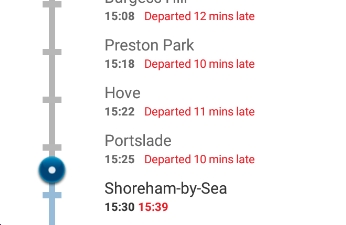 Happily, sons plus limmo were waiting and, on arrival at No 3's pad, flagons of tea and a huge Belgian Bun ... 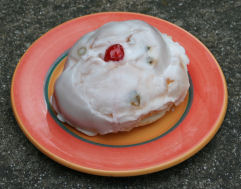 ... soon erased the horrors of the journey. (Actually 1½ Belgian buns and a Marmite sandwich; there being no time to stock up with comestibles at Clapham!)

Could SouthWest Trains have done better? The impression was that huge efforts were being applied to "recovering the service" as a technical exercise but very little effort was being applied to considering the passengers.

That wouldn't be because of stringent financial penalties incurred by SouthWest Trains for "delay minutes" would it?

And, surprise, surprise, there were no announcements explaining the compensation scheme.

Where was the Management? Administrating, yes; managing, not really.