Where Was the Management?

The Plymouth paper points out:-

Park and ride users looking to get back to their cars after the first night of fireworks ...

... on The Hoe faced waiting times of more than an hour before they were able to board a bus to car parks at either Coypool in Plympton or The George in Southway.

Chris Ripley, said he gave up after an hour and took a CityBus towards Plympton, kindly being let on with a park and ride ticket by a driver who felt sorry for him and his 14-year-old son given the long queues in the city centre. Mr Ripley said: “We arrived on Royal Parade to total chaos. There were no visible First bus staff and certainly no organised queues or even notifications as to which bus stop to use.

Where were First's senior managers? 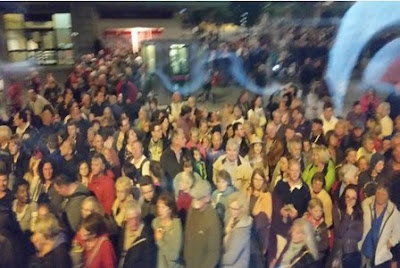 The pavements were rammed with confused travellers and buses started arriving at seemingly random stops. 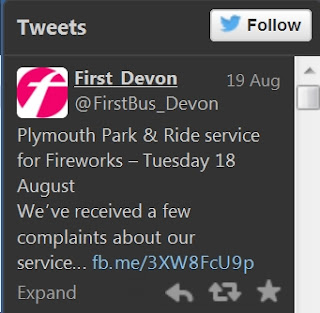 While we don’t wish to make excuses (we know there were a number of issues) we would like to try and explain a bit further, and of course say sorry.

Following the sale of the Devon business, a number of staff members who would have covered these extra evening services have left.

No surprise there, surely?

We’ve done our best to find other staff but have struggled.

A minibus load of the lads from Bristol? A batch from Weymouth? How hard did you try?

Not good enough we know but we’re trying to be honest. Those who did volunteer were just that ‘volunteers’ – most were not getting paid to drive or supervise.

So you didn't pay your drivers but you charged the passengers? Surely not?

Lastly with the weather being so good last night it also meant that there were a lot more people attending last night than we would have expected.

So it's God's fault for sending good weather?

We are very grateful to Citybus who helped clear the big queues at the end of the evening (and they have, naturally, sent us their invoice!). So once again we apologise for how long it took to get you home last night.

Can I just add some balance to the discussion. Firstly, I believe it important to remember that trying to judge the resources necessary depends on the weather because that will always determine how many of the public attend and as a result how many will use the buses provided, rain would have meant the overprovision of buses whereas the good weather coupled with a forecast of rain for Wednesday resulted in many more deciding to go on Tuesday rather than on Wednesday or Thursday.

NOT a valid excuse. First should be capable of managing the risk.

We left the fireworks early to catch a PR2. We knew it would be busy. We expected queues. What we did not expect, when we stood there with just a few other early birds, was to watch several PR1 buses stop and collect, while the PR2 queues just grew. Unfortunately the queues ended up merged! A lady in a high viz jacket (your staff?) tried to get a PR1 to change to a PR2 as none were arriving. He refused.

Again, where was the management?

Just before midnight, a PR1 bus - with spaces that no one wanted - drove off. Another bus replaced it - showing not in service as several earlier ones had - which didn't help either! This bus driver did not want to change to a PR2 - until I said to him - there is no one here who wants a PR1 !!!! The crowds confirmed this - and finally we got a bus!

Yet again, where was the management? 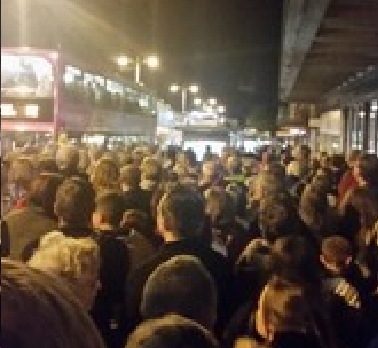 Now that is EXACTLY the point - you KNEW but didn't MANAGE.


NEVER AGAIN!!! Won't even bother with the fireworks - can't even remember whether I enjoyed them - the evening was spoilt. 5 hours for 45 mins of fireworks!!???

But here is a short YouTube video of some of the fireworks.
So lets be fair. Managing big, free, weather dependent events is far from easy. And such events attract members of the public, some of whom are intrinsically rude, impatient and awkward; even more so when things go wrong.

There is no excuse for bad management. At one point First referred to supervisors and stewards "usually provided by Plymouth City Council". Sounds a bit like buck-passing, doesn't it? fbb remembers a big rail replacement job relatively early in the tenure of Stagecoach at South West Trains. Who was there, managing? None other than Uncle Brian Souter himself, the mega boss in person! Plymouth was not that big, so Fearnley could stay at home beslippered and comfy, but the lack of people in Plymouth with the authority to sort things out was inexcusable.

Despite this inability to arrange pea soup at the brewery, the anger was only expessed by a very small minority; most Plymothiams and visitors had a super-smashing evening and accepted the chaos with standard British "sang froid" and stereotypical stiff upper lip. Many even thanked First on-line for doing a good job under difficult circumstances.

Tomorrow we ask the same questions of SouthWest Trains, erm, a Stagecoach company. Where was the management?

But First are marking their departure from Plymouth with a splendid event for the "hairies". 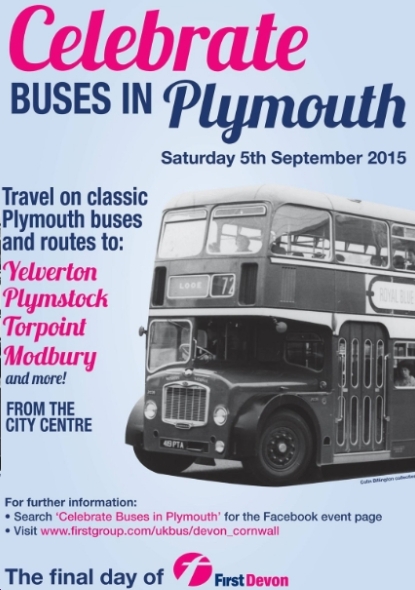 fbb wonders whether they will have enough drivers?