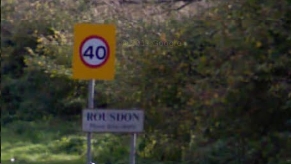 ... twice (or did; the shop has closed). Devon County Council is happy with the second "O" in its publications ...

... but the First Bus timetable for the new services strikes an independent note with ROUSDEN.

They do have a slight precedent as the ever reliable (snigger, snigger) Google Maps shows both ... 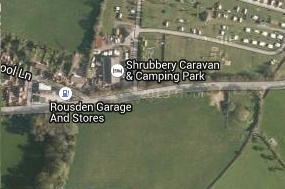 ... "E" for th garage and "O" for the village. fbb wonders, idly, whether the good folk at First Hampshire and Dorset ...

... have even been to Rousdon; or, indeed, have ever ridden the full length of the X53? fbb has, all the way from Exeter to Bournemouth (the route now goes no further than Poole) in one go, and remembers the pains in the posterior to prove it! See "Good Value by Bus" from a 2010 blog (read again). Well, lads, grab the chance before the upcoming timetable change because it will be a lot harder from the end of September.

The good news is that the X53 between Poole and Weymouth still runs every two hours Mondy to Saturday. 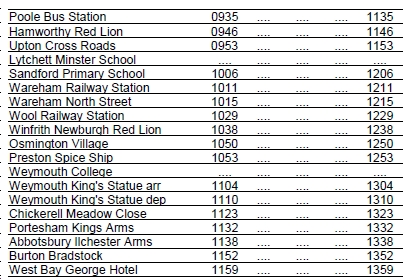 The X31 is renumbered X51 to provide the paint shop with extra work changing the graphics on the side of all the buses. No other reason can be gleaned as the Monday to Saturday hourly service is conceptually he same as now.

The big change is that he X53 is diverted via Axminster ... 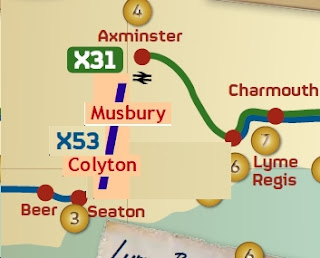 ... rather than direct via the A3502 and Rousdon between Lyme and Colyford. [apologies for the grotty map.]

But between Bridport and Axminster there are additional X53s (why X53? they are the same as short workings on the X31/X51) providing a bus every half hour on the "busy" (?) section.

The X31 (and the X53 for that matter) are prone to traffic cloggage delays in peak summer so a half hourly frequency will, maybe, help with spreading the waiting pain. But every half hour IN WINTER?

It is west of Axminster, west of the Axe, that the axe is wielded in an incomprehensible way. The reduction comes straight from the Moir Blockhead** "Guide to Ruining a Bus Service for Ever" staff manual that was the Bible of the pre-Fearnley regime.

Instead of a bus every two hours between Lyme Regis and Exeter, we have two journeys in each direction via Axminster and Colyton plus positioning trips via the old (Rousdon) route. 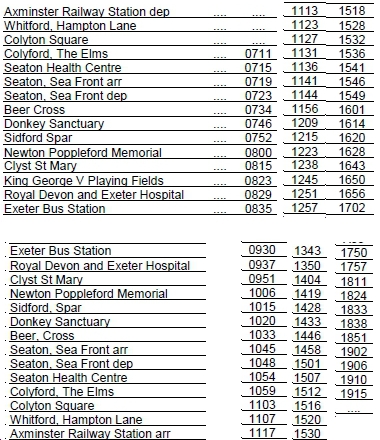 Colyton residents have yearned for a direct bus to Exeter and now they've got one.

Wowsers! Seatonians, of course, have the Stagecoach 52A but will be deprived of a direct bus to and from the big regional hospital (Royal Devon and Exeter). No doubt not enough of the old codgers have been using the bus for their routine appointments.

Or, perhaps a day in Lyme Regis from Exeter?

That's not so bad; First Bus must think Lyme Regis is a dump anyway.

Maybe from the B&B in Beer to enjoy some fossil hunting at Charmouth? 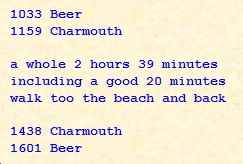 [sorry about the extra "o" in too - stubby fingers strike again!] What a wonderful day out.

But hold fast to the opprobrium. Maybe First will bring back the two hourly service for Summer 2016. Sadly, by then, all local advice will have expunged such pointless trips from their potential itineraries. Offended passengers don't come back - ever! Surely there is a better way; better than running empty buses every 30 minutes between Aminster and Bridport?

Of course, running buses is about profit, not providing a service if no real demand exists; but is this really the best solution?

In the meantime the Gloucester Old Spots are at the end of the runway and preparing for take-off.

P.S. Whilst on this anti First Bus rant, fbb notes that the Sunday service X31, once hourly between Dorchester and Axminster ... 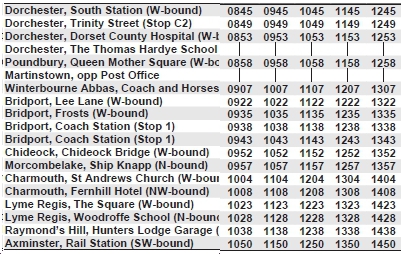 ... not even running at fixed times past each hour.

So no Sunday buses between Dorchester and Bridport in the winter; and in summer 2016? If the revised route and timetable brings an acceptable "return on assets required", there will be little incentive to take the risk of a seasonal expansion. 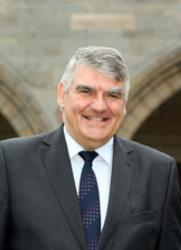 ... whose draconian financial policies led to a cycle of fare rises and route withdrawals from which First is only just beginning to recover. Did fbb make a "freudian slip" above?


Next speculative blog : Wednesday 19th August
Posted by fatbusbloke at 02:00